JUST weeks after the government approved its strategy on energy security, which is intended to guide policy for the next 20 years or so and which defined nuclear energy as one of its key pillars, Slovakia’s dominant power generator started the construction phase of two further blocks at the Mochovce nuclear plant. 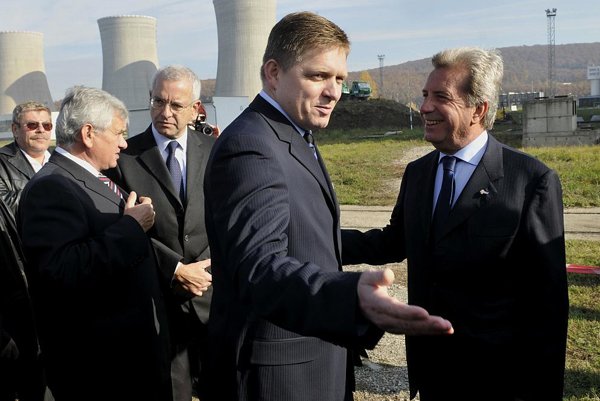 JUST weeks after the government approved its strategy on energy security, which is intended to guide policy for the next 20 years or so and which defined nuclear energy as one of its key pillars, Slovakia’s dominant power generator started the construction phase of two further blocks at the Mochovce nuclear plant.

Slovenské Elektrárne (SE) officially launched the project, which carries an Sk83.6 billion (€2.775 billion) price tag, on November 3. At its peak, the project will provide jobs for about 4,000 people; if completed on time, the two reactor units should be connected to the power grid in 2012 and 2013 respectively. The official construction launch came after the Nuclear Regulatory Authority of Slovakia approved design changes to the new Mochovce units.

The government of Robert Fico has been edgily awaiting the launch of the project, keen for it to plug the gap in Slovakia’s domestic electricity-generating capacity as soon as possible. But environmental watchdogs object to the money being spent on the project, which they say will also deepen Slovakia’s already-excessive dependence on fuel from Russia.

Slovakia, which relies on nuclear generation for a significant proportion of its electricity, switched off the first of the V1 units at its other nuclear power generation site, at Jaslovské Bohunice in Trnava Region, in late 2006 in order to comply with European Union regulations on decommissioning outdated Soviet-designed nuclear plants. The second V1 unit will be shut down by the end of 2008. A second power plant at the same site, the V2, will remain in operation.

“This is an important day for both Slovakia and Enel,” said Fulvio Conti, CEO and General Manager of Enel, the Italian power company which holds a 66 percent stake in SE, on November 3. “The completion of the Mochovce nuclear plant will contribute to the country’s security of supply and to its growing electricity needs.”

Conti added that SE’s cash flow will be used to finance the project.

“No dividend will be distributed to shareholders until the project is completed,” said Conti, according to an official statement. The state holds a 34-percent stake in SE.

Cost estimates for the project published in early November are considerably higher than those made in 2007.

“The budget for the project had to be increased by €958 million, or approximately 53 percent when compared to the April 2007 estimate … of €1.817 billion,” SE spokesman Juraj Kopřiva told The Slovak Spectator.

Kopřiva cited the appreciation of the Slovak crown against the euro between April 2007 and October 2008 as one of the main reasons for the swollen budget. The rising prices of commodities have also contributed to the increase, he said.

“The market for any commodities related to power plants has shown a significant increase in recent years due to a large increase in demand,” Kopřiva said. “The market for nuclear services and components has shown an even higher increase due to nuclear programmes re-starting all over the world, and due to the well-known lack of skilled human resources, facilities and contractors.”
Environmentalists have objected that the project will carry far too heavy a price tag.

“Investment costs for 1 megawatt of installed output based on completion of the Mochovce nuclear power plant are higher than they are in the case of brand new reactors in France,” Karel Polanecký of the environmental watchdog Greenpeace told The Slovak Spectator, adding that this is based on current data which could still change.

According to Polanecký, investment costs for combined cycle thermal generating units are considerably lower. However, the variable costs are higher and depend on the price of gas.
“Enel has been declaring that completion [of Mochovce] is the most economically advantageous option,” Polanecký said. “However, the feasibility study has not yet been published.”
Environmental watchdogs also claim that the completion of Mochovce will deepen Slovakia’s energy dependence on Russia.

“All the VVER 440-type blocks, which will be constructed in Mochovce, are dependent on the supply of Russian fuel,” he added.

Kopřiva, however, said that construction has only just started and discussing a supplier for the nuclear fuel would be premature. As for the storage of spent nuclear fuel he does not see Slovakia being disadvantaged either.

“For spent nuclear fuel there is a repository in Slovakia, though not the final repository,” Kopřiva said. “This is a better solution because the fuel may be re-processed or later used in different types of reactors – an option one would not have if the spent fuel was sealed in a final repository.”

On July 15, the European Commission issued an official opinion on the completion of Mochovce (its first two blocks have been operating since the 1990s) which contains recommendations which it says must be implemented if the project is to be in line with the objectives of the Euratom Treaty.

SE said that its recommendations will be fully implemented in the design. It also said that the nuclear regulatory authority had approved the changes to the construction’s design, which was a condition for incorporating all the safety changes to the civil and technological part of the design.

SE also said that it would start an environmental impact assessment (EIA) procedure - required before the blocks are commissioned or an operating licence is issued - within the current year.

Environmentalists, while acknowledging that nuclear power decreases greenhouse gas emissions, have kept up their calls for an EIA; Polanecký criticised SE for not submitting the project to a public EIA before it was launched.