A display with a life of its own

IT MAY be hard to imagine reliving the entire 20th century in just an hour. But an exhibition at the Slovak National Museum (SNM) makes it possible, even without a time machine. How Did We Live? takes the viewer on an exciting journey throughout 1,200 m2 of show space and more than 2,000 exhibits.With almost two dozen institutions participating in its organisation, the display, which is subtitled Slovakia in the 20th Century, is one of the SNM’s biggest and most popular projects in a decade. 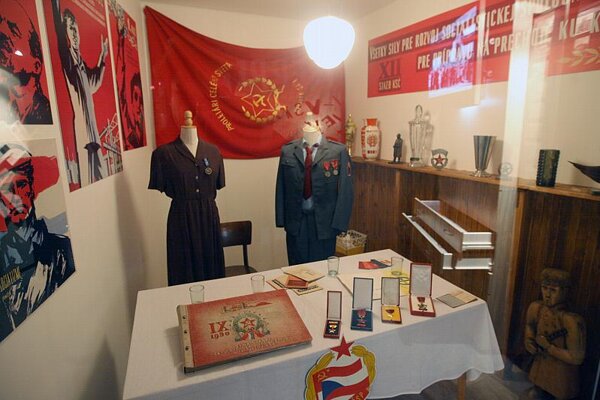 IT MAY be hard to imagine reliving the entire 20th century in just an hour. But an exhibition at the Slovak National Museum (SNM) makes it possible, even without a time machine. How Did We Live? takes the viewer on an exciting journey throughout 1,200 m2 of show space and more than 2,000 exhibits.
With almost two dozen institutions participating in its organisation, the display, which is subtitled Slovakia in the 20th Century, is one of the SNM’s biggest and most popular projects in a decade.

The attendance says it all, organisers say. Although it opened in mid-February, the exhibition is still attracting hundreds of visitors every day. Therefore, it was recently extended until the end of the year. Shortly afterwards, Culture Minister Marek Maďarič shook hands with an elderly couple who were the 60,000th visitors to the display.

“Viera and Ján Kurcabs received several gifts including a copy of the Declaration of the Slovak Nation adopted in 1918, and accepted an invitation for a cup of coffee with the minister, the museum’s director general and the curator of the project, where they shared their general impressions of the exhibition,” said Markéta Plichtová, PR manager of the SNM.

How did we live?

The exhibition answers the question “How did we live?” with seven chronological sections separated by historical milestones such as the two world wars and the Velvet Revolution. One can experience the spirit of the 20th century by viewing the objects that once surrounded Slovaks in their everyday lives, or find out about the most important issues from a number of documents, photographs, postcards and information boards.

Visitors can, for example, stroll through a dining room of a burgher house from the beginning of the century, a 1920s shoemaker’s shop or a 1970s kindergarten. Radio and television broadcasts reflecting historic events and continuous screening of old Slovak movies also contribute to the authentic atmosphere.

Although the exhibition might only seem accessible to Slovak speakers, the contrary is true, Plichtová said.

“All the texts are translated into English so that foreigners can understand and discover our country’s modern history as well,” she told The Slovak Spectator. “Moreover, they can make use of an audio guide, which complements the written information and provides detailed commentary with a number of interesting facts. This is the first time such an audio tour is being used in our museum.”
The exhibits also have bilingual labels under them, which illustrates the SNM’s new, modern approach. The museum is also seeking ways to make exhibits about various social or historical issues more interactive.

Marcela Lukáčová, manager of the SNM’s Museum Pedagogy Section, told The Slovak Spectator that the How Did We Live? exhibition is a good example of this philosophy.

“Its visitors really feel that they in some way or another represent a part of the history presented at the exhibition,” she said. “It is very rewarding to see them leaving the museum with the feeling that the display is telling their own stories or stories that somehow touched them.”

In addition, the SNM has offered a great deal of accompanying events throughout the exhibition’s run. As many as 100 film screenings, four theatre performances, seven discussion forums and even a fashion show have been available to date. Another 30 will be enriching the general programme until December 31, including three smaller related exhibitions: Masaryk and Bystrička, Science and Technology, and The Slovak Big Beat.

In order to sum up the whole project, a closing ceremony and a debate with organisers will be held on December 16.

Its witty title, How Did We Survive the Exhibition?, suggests that preparing such an expansive display was a challenge, even for experienced museum workers.

“It has not been simple at all,” Peter Tomčík, one of the exhibition’s curators, told The Slovak Spectator. “Putting together a survey of the past century in Slovakia requires a thorough study of manifold historical, ethnographic and artistic materials. The challenge was not only to choose from a wide variety of available exhibits, but also to adjust them to the designers’ ideas.”
Tomčík also said that another particularity of the How Did We Live? display was its continuous transformation.

“An ordinary exhibition culminates with its opening,” he observed. “But this project has been completely different. Since the very beginning, it has lived its own life, with dozens of people having worked on its extensions.”

Branislav Rezník, deputy director general of the SNM, agreed with Tomčík that preparing a display of such dimensions was easier said than done.

“No newspaper has enough pages to describe all the steps we had to take both before and after launching the event,” he stated. “It was hugely demanding in every single aspect, and particularly as far as coordination of respective tasks is concerned.”

As the SNM plays mainly an educational role, the make-up of its activities is not at all accidental, Rezník added.

“The museum is a public institution, which means that it should meet the expectations of as many people as possible, whether they be Slovaks or foreigners,” he told The Slovak Spectator. “That is why we focus on topics that generally speak to anybody, and try to transform them into a varied kaleidoscope, where everyone can find something interesting.”

This is also the case with exhibitions following How Did We Live?

“An extensive display about the Himalayas and the surrounding countries is being prepared in cooperation with the Czech editors of National Geographic magazine,” he said. “Furthermore, a huge project reflecting on the Slovak National Uprising will be held next year on the occasion of the SNM’s 65th birthday. But this is only a fraction of our offer. With as many as 200 exhibitions and approximately 1,000 accompanying events taking place in its respective branches every year, the museum will definitely satisfy the most varied wishes of our visitors.”

This proves, Rezník said, that the SNM and similar institutions shouldn’t be concerned about becoming irrelevant, even in this era of shopping centres and amusement parks.

“Provided museums continue collecting, protecting and presenting original artefacts that have their own history, there is nothing to worry about,” he commented. “The desire to discover is one of the most natural human features, and there still will be many to whom ‘to be’ means more than ‘to have’. Such people can never be satisfied by shopping malls and they will never let museums disappear.”