A quantum of plotline

THE PROBLEM with Bond films is not the unbelievability: that’s basically what you go for. It’s that it’s all been done before. This conundrum led Bond in his Pierce Brosnan incarnation so far down the road of computer-generated stunts that you might almost have been better off watching the Playstation spin-off rather than the film. Daniel Craig’s first outing, Casino Royale, was rightly applauded for getting back to basics, dropping most of the gadgets and even letting Bond bleed a little. 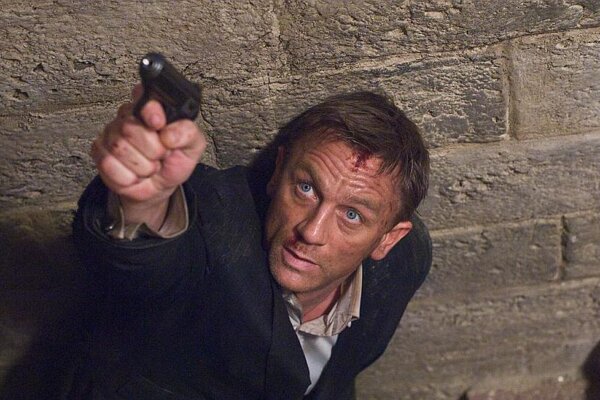 Shaken, not stirred: Daniel Craig, as James Bond, ruins yet another suit in Quantum of Solace. (Source: ItaFilm)
Font size:A-|A+

THE PROBLEM with Bond films is not the unbelievability: that’s basically what you go for. It’s that it’s all been done before. This conundrum led Bond in his Pierce Brosnan incarnation so far down the road of computer-generated stunts that you might almost have been better off watching the Playstation spin-off rather than the film. Daniel Craig’s first outing, Casino Royale, was rightly applauded for getting back to basics, dropping most of the gadgets and even letting Bond bleed a little.

But already, by film two, the grittiness is becoming cliched. Craig spends almost the whole piece caked in grime and dried blood, to the point where he’s in danger of getting too crusted up to pout.
Which might not please the sponsors, whose incessant product placement is starting to grate. Loudly.
Everyone’s got a snazzy phone, none of which I could identify (but then I own a four-year-old, thousand-crown Nokia, so I don’t suppose I’m the target here).

Mercifully, they seem to have laid off the chunky wrist-watches for once.

But they’ve made up for it with four-wheel drives, which wallow across almost every scene.
The only recognisable ones are boxy Land Rovers. Which is ironic, because the brand’s former owner – the American firm which paid for all the other, anonymous, off-roaders in the film - flogged it earlier this year. Perhaps it was too late to pull the Land Rovers, though everyone driving them meets a suspiciously nasty end.

Richard Branson’s gratuitous micro-cameo in Casino Royale was bad enough, but Bond is still flying Virgin in this film. The look-at-me showiness of Branson and the understated cool of Bond are so diametrically opposed that these scenes just come across as phoney.

The film itself? A moment’s reflection after stepping out into Aupark’s gaudy lights (as with any good Bond, there’s no time to think during the picture) reveals that it has no discernible plot. So no change there then. Something about a shadowy criminal conspiracy (natch) trying to corner the world’s water supply, starting in… Bolivia. Hmm.

The lazy stereotypes run thick and fast. The slobbish, cynical, horrifically-moustachioed CIA chief fairly reeks of the Philip Seymour Hoffman character in last year’s Charlie Wilson’s War. The Americans are up to their necks in regime change and short-sighted power politics, the Russians even worse (everyone seems to have a ‘Siberian’ bank account, whatever one of those is). Thank goodness the Brits (in the form of Dame Judi) can be trusted to play a straight bat… Or can they?

There are some good wise-cracks, the best a Bond one-liner about M. But you can’t help feeling they’ve missed some real comic potential.

Somehow, a middle-aged Ferris Bueller-lookalike has ended up playing the arch-villain, with a sidekick whose comedy haircut alone should qualify the film for some sort of Oscar.

So when Bond comes out with the immortal chat-up line: “My contacts tell me you worked for Bolivian intelligence”, everything is set for a Roger Moore-style raised eyebrow to compensate for all the pouting. But Craig delivers the line without so much as a smirk and the moment is lost.

For all that, it’s still a hoot. The set-pieces are awesome, the foreign settings exotic, the title sequence is uber-cool and the girls are gorgeous: it does what it says on the box. Even if it is now a very old box.

If you insist on caring about the plot (and, honestly, I really wouldn’t bother) it might help to watch Casino Royale again: there’s a lot about ‘Vesper’ - who I only cottoned towards the end was his significant other in the last film and is supposed to be the reason he’s running around blowing people’s brains out in this one.

Speaking of which - and, yes, I know we’re all supposed to be post-feminist SNAGs now - by my count Bond sleeps with just one girl during the whole film. One? Oh James. Must do better.

Quantum of Solace is showing, every five minutes (or so it seems), at Palace Cinemas in Aupark and Polus City Center in Bratislava, and nationwide.