PRIME Minister Robert Fico and Hungarian Prime Minister Ferenc Gyurcsány emerged from talks in the town of Komárno on November 15 having made a number of lofty promises but little progress in resolving the disputes that have caused a surge in tension between the countries. 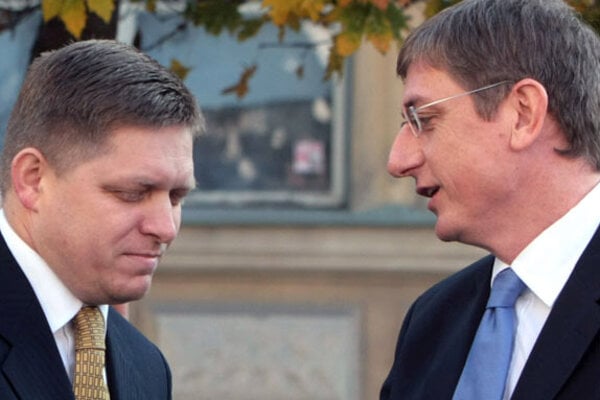 PRIME Minister Robert Fico and Hungarian Prime Minister Ferenc Gyurcsány emerged from talks in the town of Komárno on November 15 having made a number of lofty promises but little progress in resolving the disputes that have caused a surge in tension between the countries.

One of the main issues addressed was the police response to rowdiness at a football match in the Slovak town of Dunajská Streda on November 1, in which several people were injured, including Hungarian citizens. Some have criticised the police’s actions as disproportionate, or even motivated by nationalism, as the town’s residents are predominantly ethnic Hungarian.

Both prime ministers condemned nationalism and extremism in all its forms, but failed to agree on a mutual plan for combatting it. Afterwards, they signed a joint declaration stating their commitment to toughening laws punishing extremism.

But the joint press conference following the talks showed, according to observers, that a great deal of negotiation lies ahead.

At one point, Fico urged Gyurcsány to propose laws that would lead to “tougher crackdowns on all examples of fascism, xenophobia and ethnic intolerance”.

“We prosecute people in Slovakia and dissolve organisations that espouse such an ideology, and we intervene when we see that someone is breaking the law,” Fico said, as quoted by the public Czech Television station (ČT).

He was referring to the Interior Ministry’s decision, made literally hours before the talks, to dissolve Slovenská Pospolitosť (Slovak Solidarity), an extreme right-wing civic association that was a political party until it was outlawed in 2006.

Fico remarked that it pained Slovaks to see images of protestors in Budapest burning the Slovak flag, as had happened several days before the talks.

“It is also very upsetting to see banners that say Slovaks are ‘homeless bastards,’ or that we are just guests living on someone else’s land,” he said, as quoted by the ČTK newswire.

In this case, Fico was referring to members of the Hungarian Guard, an extremist paramilitary group, who at the beginning of November marched into Kráľovský Chlmec, in south-eastern Slovakia, wearing uniforms reminiscent of the Arrow Cross Party, which allied itself with Nazi Germany during World War II.

Gyurcsány responded by saying that he had already tasked his Justice Minister with amending laws to enable additional crackdowns on extremism.

Over the past several days, Slovak Justice Minister Štefan Harabin has announced that the ministry is drafting a series of amendments to the Penal Code that will extend prison sentences from three years to six for anyone convicted of disparaging another nation, race, or religion, according to the SITA newswire.

“I also propose toughening and increasing the punishment for Holocaust deniers,” Harabin said, as quoted by SITA.

Harabin faced criticism earlier this year when he directed comments at his predecessor, MP Daniel Lipšic, that many people considered anti-Semitic.

During the press conference Gyurcsány also criticised the fact that the Slovak National Party (SNS) is a member of Fico’s governing coalition.

It makes a difference if a country's nationalists are marginalised or part of the government, he commented.

“Our opinion is that Slovak politics not only flirts with nationalism, but has been engaged in it,” Gyurcsány said, as quoted by the SITA newswire.

He added that today's Europe is endangered not by fascism “but by nationalism, impatience, and covert chauvinism,” according to the ČTK newswire. “There are nationalists in your government, and they create the real politics.”

“The Slovak government consists of a coalition that matches the will of voters, and nobody will interfere, be it in Brussels, Washington, Moscow, or Budapest,” he said, as quoted by ČT.
Fico noted that the SNS is not linked to “neo-fascist organisations, nor does it organise trips by uniformed Nazis to Hungary”.

Instead, he said, the party “is tough in how it advances national interests,” according to ČTK.

Speaking on the public STV station on November 16, Fico revealed that he had accepted Gyurcsány's invitation to talks in Budapest at the beginning of next year.

“I am ready to meet Mr. Gyurcsány anytime, anywhere, on any issue,” he said.

Gyurcsány announced on the same day that he had written to Fico to officially request an independent investigation into the police incident in Dunajská Streda, the Hungarian MTI newswire wrote. Fico reportedly responded by once again defending the police's actions.

Grigorij Mesežnikov, the head of the Institute for Public Affairs think-tank, told The Slovak Spectator that the talks showed that the issues at the core of the recent disputes remain unsolved. Mesežnikov predicted that the tension between the countries will not cool as long as SNS chairman Ján Slota is in the coalition.

“The SNS is like a virus that keeps spreading,” he said. “It seems that nationalism is a strong bond for this government, and a tool for sensationalism.”

Mesežnikov noted that Fico does not need nationalism to boost his popularity.

“He has the support even without nationalism. His social rhetoric and the country's economic prosperity have put him in a strong position.”

Mesežnikov observed that the nationalism the SNS champions has spread to other members of the governing coalition.

“This has affected more than just them and the atmosphere in Slovakia," he said. "Unfortunately, it has also affected the opposition, which does not condemn nationalism strongly enough.”

Political analyst László Öllős told The Slovak Spectator that it will take time for the results of the dialogue between Fico and Gyurcsány to become clear.

Öllős noted that Gyurcsány brought a written statement of six requests for the Slovak government.

“Gyurcsány asked Fico to address the nationalists in his own government," he said, "which is something Fico will almost certainly not do."

The second request, for an investigation into the incident in Dunajská Streda, received no response as well.

“Evidently, this is not going to happen either,” Öllős said.

Gyurcsány’s four other requests concerned support for the Hungarian minority's culture and education. The plan also proposed creating bodies to check on the progress being made in fulfilling the requests.

Öllős expressed scepticism about whether any of the requests would be met.

Rather than wait to find out, he said, intellectuals from both sides met in Budapest on November 17, after which they released a joint statement.

“We, Hungarian and Slovak intellectuals, will monitor the situation, and repeatedly meet and communicate when politicians fail to do so,” Öllős, who is a member of the group, told The Slovak Spectator.

See a profile of both countries far-right groups)