AS THOUSANDS of people across Slovakia observed the 19th anniversary of the Velvet Revolution on November 17, Prime Minister Robert Fico let it be known that he was treating it like any other day. And polls published by several media showed that today’s teenagers know little, if anything, about its significance. But groups who are concerned about the direction and tone that politics has taken in Slovakia lately didn’t let the occasion pass unnoticed. Some organised rallies at Bratislava’s SNP Square, while others, such as the non-parliamentary Civic Conservative Party (OKS), as well as environmental groups and non-governmental organisations, organised concerts and discussions. 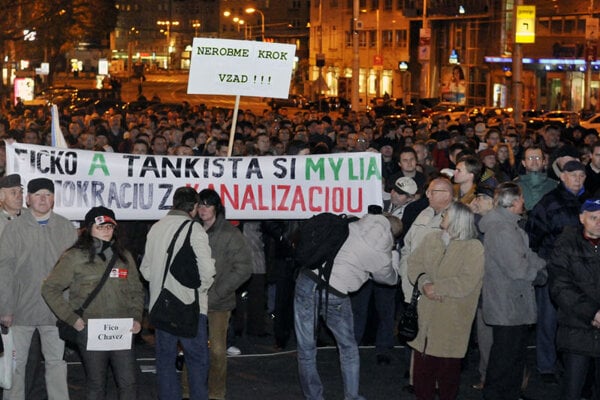 AS THOUSANDS of people across Slovakia observed the 19th anniversary of the Velvet Revolution on November 17, Prime Minister Robert Fico let it be known that he was treating it like any other day. And polls published by several media showed that today’s teenagers know little, if anything, about its significance.

But groups who are concerned about the direction and tone that politics has taken in Slovakia lately didn’t let the occasion pass unnoticed. Some organised rallies at Bratislava’s SNP Square, while others, such as the non-parliamentary Civic Conservative Party (OKS), as well as environmental groups and non-governmental organisations, organised concerts and discussions.

The discussions raised topics related to the Velvet Revolution as well as current issues, and included harsh criticism of the governing coalition headed by Fico’s Smer party.

Katarína Kližanová Rýsová, the spokesperson for Smer, told the Hospodárske Noviny financial daily that Fico was not scheduled to celebrate the anniversary of the revolution, which swiftly brought down the totalitarian regime in 1989.

“Despite November 17 being a public holiday, Robert Fico will continue his official duties,” she said.

In fact, Fico spent the day near the highway over the bridge between Bernolákovo and Chorvátsky Grob, near Bratislava, where a stretch of highway is under re-construction.

“I know what happened in 1989,” he told journalists. “But I think it is good to commemorate such events with specific projects, rather than just symbolically, like going somewhere to lay a wreath.”

He noted, “There has been a lot of discussion about the need to solve the serious situation in transport along the stretch of highway between Bratislava and Trnava.”

A Concert for the Concerned

Two concerts took place in Bratislava’s Park of Culture and Leisure (PKO) to mark the anniversary of the Velvet Revolution. The first, called the Concert for the Concerned, was organised by the Fair Play Alliance (AFP) non-governmental think-tank and the Pohoda agency.

Zuzana Wienk, director of the AFP, said that the concert was staged to highlight the need for tolerance of the diversity and “otherness” that is disappearing from Slovak politics.

“I have the impression that politics has become cynical, and now serves personal interests rather than the public interest,” Wienk told The Slovak Spectator. “It has changed into something uncivil that treads on the law.”

Wienk said the concert also sent the message that not all Slovaks are ill-mannered and intolerant.

“The public would like politics to be more civil, decent and proper, for it to be dedicated to the public interest, and for it to follow the law,” Wienk stated.

The diversity of the evening's entertainment matched that of the society in attendance. The Pressburger Klezmer Band opened, followed by Hungarian band Erik Sumo Band and Hassidic Songs, a project that included piano accompaniment by Rabbi Baruch Myers, Bratislava’s chief rabbi.

Michal Kaščák of the Pohoda agency commented that today, 19 years after the revolution, some politicians act as though totalitarianism still exists.

“Unfortunately, some of those people are among the country’s top representatives,” Kaščák said, as quoted by the SITA newswire.

He also emphasised that the lessons of the Velvet Revolution need to be kept alive, as freedom is not to be taken for granted. He pointed out that the concert had been organised to show that there many people are concerned by the current tone and direction of Slovak politics.

A Concert for Decency

The second concert at the PKO took place a day earlier, on November 16. It was called Public 2008 – For Decency and Lawfulness, and was organised by environmentalists and the Citizen and Democracy civic association. Famous Slovak musicians such as Marián Varga, Peter Cmorík and Peter Lipa performed for free.

Ján Budaj, one of the key speakers in the demonstrations at Bratislava’s SNP Square during the Velvet Revolution, told The Slovak Spectator that he was glad that the concert was organised to address current issues as well.

“Such an evening answers what relationship November ‘89 shares with today,” Budaj said. “Criticising a ruling coalition’s mistakes is as much a part of democracy as free elections.”
Budaj said that the fact that such a concert took place as an activity of civic associations is proof that the public understands that the fight for democracy did not finish in November 1989.
“The public understands that in an open system, like the one we created after November ‘89, negative elements can also appear, such as nationalist extremists,” Budaj added, referring to the worsening Slovak-Hungarian relations lately.

Environmental groups at the concert cited cases in which they believe the current government has disrespected the environment and the will of the people. Activists from Pezinok, a town near Bratislava, pointed to the construction of a waste dump near the town’s historical centre that has been met with angry protests from residents and the local government, which consider it illegal.
Juraj Smatana from the Ekofórum (a network of non-governmental, conservationist and civic associations) said the public can still emerge victorious on several important issues.

On that note, the groups collected signatures on petitions against the waste dump in Pezinok, against the growing nationalist sentiment in Slovakia, against uranium and gold mining and against the construction of a housing estate in Devín, a suburb of Bratislava.

Šarlota Pufflerová of the Citizen and Democracy civic association declared that authorities must start acting in the public interest and stop violating human rights by refusing to take appropriate actions.

Daniel Pastirčák, a pastor with the Evangelical Church of Czech Brethren, also delivered a speech. He told The Slovak Spectator that although the Velvet Revolution abolished one-party rule in Slovakia, civic democracy has been in dire straits in recent years.

As an example he cited the case of Hedviga Malinová, the Slovak-Hungarian student from Nitra who made headlines two years ago when she reported being beaten by a group of skinheads for speaking in Hungarian while on her mobile phone.

Media published pictures showing her swollen face, as well as testimony from doctors, who said she had suffered bruises and a minor concussion. Yet police eventually concluded that Malinová had faked the incident, and charged her with filing a false report.

Even Interior Minister Robert Kaliňák sided with the police.

Since then, the media has uncovered evidence proving that Malinová was attacked, but police have refused to continue the investigation.

“The fact that top state representatives stood in front of the cameras and made this charge against her, even calling her an enemy of the state, is worrisome to me,” Pastirčák said.
He added, “I am convinced that the Malinová case proves that some people here are trying to minimise democracy.”

A Monument to the Unknown Idiot

Meanwhile, as many 1,000 people took part in a rally at SNP Square at 17:00, just as they had 19 years earlier. It was organised by the non-parliamentary Civic Conservative Party (OKS) and two civic associations, the Citizens Against Totalitarianism and the Civic-Democratic Youth.

The demonstrators carried lit candles and signs bearing messages such as “Let’s Not Take a Step Back”; “Ficko and the Tank Driver Mistake Democracy for Sewage”; and “[Justice Minister Štefan] Harabin into the Chimney”.

In a speech to the crowd, Fedor Gál, who was heavily involved in the demonstrations during the revolution, invoked the site’s symbolic value.

“Then, we did not anticipate the long journey we have had,” he said.

Other figures from the revolution also delivered speeches, including Peter Tatár and František Šebej. Like Gál, they expressed concern about what they see as open cronyism, growing partisanship and arrogance of power taking hold in Slovakia.

Specifically, the speakers mentioned two stories about the governing coalition that were based on articles published in the country’s major dailies earlier this year.

The first concerned a Sk7 million donation to former prime minister Vladimír Mečiar’s HZDS party that it allegedly received from a poor pensioner. The other concerned the Slovak National Party (SNS), whose members were suspected of enabling chairman Ján Slota to receive his full salary by forging his name onto parliament's attendance sheets.

More than half of the demonstrators then followed the organisers to the Justice Ministry, where they observed a minute of silence to protest Justice Minister Štefan Harabin.

Ondrej Dostál, the vice-chairman of the OKS, took up a megaphone to express outrage at allegations that Harabin has ties to a figure from the underworld.