GO TO a rock concert for the music, to a club for the dancing, to a cabaret show for a good laugh, or to a performance by Lúčnica for all three. 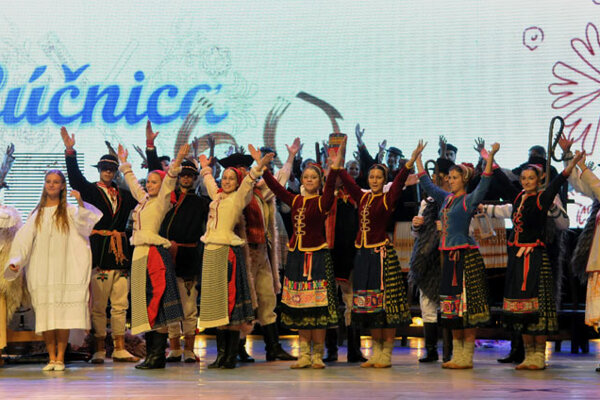 Several generations of dancers and singers have performed in Lúčnica, keeping it young throughout its history. (Source: ČTK)
Font size:A-|A+

GO TO a rock concert for the music, to a club for the dancing, to a cabaret show for a good laugh, or to a performance by Lúčnica for all three.

Slovakia’s best-known folklore ensemble is celebrating its 60th anniversary this year, and its recent gala showed it is still extremely popular.

Lúčnica performed the show, entitled 60 Years of Beauty, to eight sold-out crowds at Bratislava’s Istropolis Theatre throughout the last week in November.

Each time, the audience responded with a 10-minute standing ovation. Tickets for the last performance, planned for December 1, sold out a week in advance.

The two-hour performance was a review of the troupe’s most successful dance scenes and songs since 1948.

Slovakia’s different regions were represented by a variety of costumes, styles and melodies, including an authentic mixture of slow romantic numbers and fast-paced humorous scenes.

Organisers said the show was exceptional in more ways than one.

“For the first time in 40 years, the Lúčnica dance ensemble, choral ensemble and Golden Violin orchestra were onstage together,” said Marián Turner, Lúčnica’s director. “In addition, the musicians premiered two compositions, and this was the first time that we used special video effects like the huge projection screen in the background.”

Over the course of six decades, Lúčnica has sent several generations of dancers and singers – more than 2,000 in total – around the world with shows that have delighted audiences and critics alike.

Lúčnica "is absolutely first-rate,” wrote The New York Times in 1994. “Its young dancers sparkle with glittering technique in an eye-opening repertory that remains true to its surprisingly diverse sources.”

The Canberra Times stated that “with their talent and pure beauty, these dancers are absolute shining representatives of their country”; La Marseillaise, a French weekly, labelled them “the Rolling Stones of Folklore”.

A great part of the ensemble’s success is, in Turner’s view, due to Professor Štefan Nosáľ, the troupe’s artistic manager and choreographer, who has led it for 59 years.

“The ensemble has gained international recognition thanks to his talent, expansive knowledge of local folklore, great ideas, utmost diligence and, mainly, his admirable ability to create new forms of national art from Slovak cultural heritage,” Turner told The Slovak Spectator. “Professor Nosáľ is among the world’s top choreographers, and this is not only because his works are excellent in quality, but also because they communicate a message that can be understood by anyone.”

Turner added that this is crucial today, when Slovakia is a member of various international organisations.

“Dance and music are the most original and at the same time most accessible means of self-presentation,” he observed. “Art needs no interpreters and its rich content often says more about a country than any publication or lecture.”

Lúčnica is an example of such a “cultural ambassador,” Turner said.

“The ensemble is an incredible artistic phenomenon,” he stated. “It has instilled a sense of responsibility and self-sacrifice in its members and love and respect for Slovak lore in entire generations of spectators. Professor Nosáľ and his team have elevated traditional Slovak culture to higher planes.”

On November 24, Nosáľ watched the performance from the audience. At curtain call, one of the dancers called him onstage, where the 80-year-old bowed several times to the young artists.

“I am deeply touched that I have lived to see Lúčnica celebrating 60 years,” he wrote in the programme brochure. “I wish to thank all members of the ensemble, former or present, as well as my colleagues and all those who contributed to our successes. Lúčnica is loved at home and admired abroad. I am very grateful for that, and very happy.”