FINANCE Minister Ján Počiatek survived a no-confidence vote held in the small hours between December 2 and 3. The opposition initiated the vote because of Počiatek’s role as finance minister in the legal dispute between Tipos, the state lottery company, and Športka, which sued Tipos in 2000 for stealing its know-how. 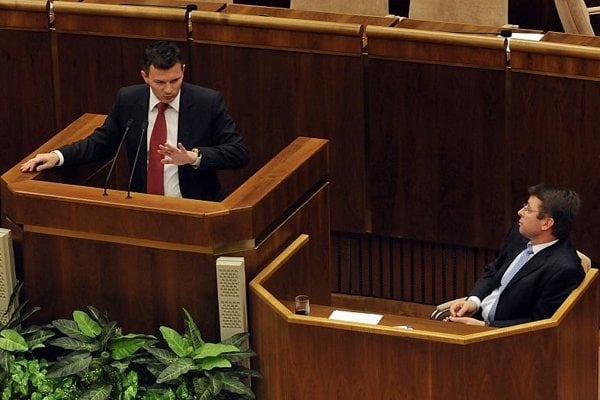 FINANCE Minister Ján Počiatek survived a no-confidence vote held in the small hours between December 2 and 3. The opposition initiated the vote because of Počiatek’s role as finance minister in the legal dispute between Tipos, the state lottery company, and Športka, which sued Tipos in 2000 for stealing its know-how.

The Supreme Court decided in Športka’s favour this August, awarding damages of almost Sk2 billion (€66.39 million), but the Finance Ministry waited until November 19 to conclude a settlement agreement with Lemikon Ltd., a private Cyprus-based company which acquired the liability from Športka while the case was working its way through the courts.

According to members of the opposition, the settlement agreement’s terms are extremely unfavourable to the state.

This is the second no-confidence vote against Počiatek this year.

In this case, 53 MPs voted to oust him and 60 voted against it. A no-confidence vote requires a simple majority of all MPs, 76 votes, to pass.

Počiatek defended his actions by noting he was bound by the Supreme Court’s ruling.

“I still insist that all our steps were directed at resolving this matter correctly,” he said following the vote.

“For what?” he asked after a cabinet session. “For respecting the Supreme Court’s ruling? This has become a total ‘Absurdistan’”.

Fico emphasised that part of the settlement allows Tipos to continue using the know-how that was at the centre of the lawsuit.

“This protects both the state’s interests and Tipos’ interests,” he stated.

In a speech in parliament, Mikloš asserted that Fico had assumed responsibility for the case by devoting his energy to defending Počiatek rather than resolving the dispute between Tipos and Lemikon Ltd.

Mikloš recalled that the Finance Ministry once shared his opinion of the case.

In March 2007, he said, when the Bratislava Regional Court ruled against Tipos and ordered it to pay Sk1.5 billion (€49.79 million) in damages, the Finance Ministry’s spokesman called the ruling illegal and wrong.

But 18 months later, Mikloš observed, the ministry had not turned to the General Prosecutor to prevent the ruling from being carried out.

This only occurred after the media published the details of the Supreme Court’s ruling and the terms of the settlement agreement, he said.

MPs finally received a copy of the settlement agreement on December 1.

Several attempts had been made to acquire it earlier, but the Finance Ministry initially refused to release it, calling the agreement’s exact wording a “trade secret”.

Opposition MPs then released the agreement to the media. Mikloš pointed out that part of the settlement required the Finance Ministry, as Tipos’ sole shareholder, to give up the right to future appeals.

Július Brocka, an MP with the Christian-Democratic Movement (KDH), identified a provision in the settlement agreement that imposed a Sk400 million (€13.3 million) fine if the state failed to begin paying the damages by the end of November. According to the Sme daily, the state missed that deadline, and on or around December 3, the amount that Tipos owes Lemikon Ltd. increased to Sk2.3 billion (€76.17 million).

Since then, Tipos has begun preparations to pay Lemikon Ltd. about Sk400 million (€13.3 million) for the know-how and Sk90 million (€2.99 million) for legal expenses. The Finance Ministry’s original plan for paying the debt called for the state to lend Tipos the rest.

Mikloš has said that he will use the settlement agreement as the basis for bringing criminal charges against Tipos’ director.

Still, Peter Kažimír, the Finance Ministry’s state secretary, defended the settlement agreement, saying the ministry is convinced it was the best option.

“It is the solution that enables Tipos to continue operating and prevents further damages,” Kažimír said.

But former justice minister Daniel Lipšic (KDH) said the settlement agreement is more damaging to the state than previously thought.

“It is not evident whether Slovakia has two liabilities – one stemming from the court’s verdict, and the other from the agreement,” Lipšic explained. “The agreement was crafted to benefit the Czech businessman in Cyprus.”

The opposition has also criticised Počiatek for not turning to the General Prosecutor’s Office, which could have appealed the Supreme Court ruling or requested an injunction.

So, at the beginning of this month, parliament quickly passed a law that enables the General Prosecutor to issue emergency injunctions against any court rulings that could inflict economic harm on the state.

The General Prosecutor’s Office issued such an injunction in this case on December 2, its spokesperson, Svetlana Močková, told The Slovak Spectator.

Jozef Vozár, deputy head of the Institute of State and Law at the Slovak Academy of Sciences, explained to The Slovak Spectator that the Supreme Court ruling would have required Tipos to refrain from even partial use of the know–how at the centre of the lawsuit .

“This would have effectively put an end to the lottery,” Vozár said.

But this was prevented when parliament granted new powers to the Prosecutor General, Vozár said.
Still, Vozár said he does not see many positives in the fact that the law was changed specifically because of the Tipos case. Tailored revisions that use the legislature to make up for the executive's failure to act are inappropriate, he said.

“On the surface, the legislature may have had a noble intention – to save the state billions of crowns – but it is a bad precedent,” Vozár told The Slovak Spectator.

“The law has allowed the Prosecutor General to temporarily prevent the ruling from being carried out," he said, "but if Tipos loses this appeal, the damages against it will be even bigger, and the lottery is at risk of being stopped completely."

Stanislav Žiačik was head of Tipos in 2000, when the dispute with Športka began.

“It is hard for me to accept that we must pay Sk2 billion,” Žiačik said at a press conference.
He believes the outcome might have been different if the ministry had dealt with the case within a reasonable amount of time.

“In the background of this whole dispute is greed, and the impression that the lottery is a trough from which everybody can have a share, ” he said.