SLOVAKIA’S first euro-denominated state budget has sailed through parliament without the opposition scoring any success in their attempts to amend it. The fiscal plan for 2009 had earlier undergone some last-minute changes by the cabinet of Prime Minister Robert Fico. The cabinet had widened the planned deficit from €886.7 million to €1.009 billion and reduced budgeted revenues by €122.7 million to €13.098 billion, but left planned spending unchanged at €14.109 billion. 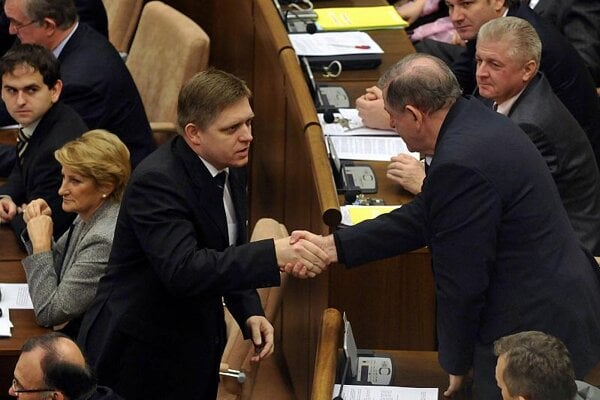 SLOVAKIA’S first euro-denominated state budget has sailed through parliament without the opposition scoring any success in their attempts to amend it. The fiscal plan for 2009 had earlier undergone some last-minute changes by the cabinet of Prime Minister Robert Fico. The cabinet had widened the planned deficit from €886.7 million to €1.009 billion and reduced budgeted revenues by €122.7 million to €13.098 billion, but left planned spending unchanged at €14.109 billion.

The state’s fiscal deficit target thus rises from the originally planned 1.7 percent of gross domestic product (GDP) to 2.08 percent, a direct effect of the looming global crisis, according to the government.

Prime Minister Fico said he believes that the approved budget for 2009 protects Slovakia and its people from the worst effects of the crisis.

While critics said that inflating the deficit during a period of economic growth – Slovakia’s economy is among the fastest growing in the European Union - was unfortunate, Fico reiterated that his budget still offers the lowest deficit ever in Slovakia’s history. The opposition called the budget a wasted chance, while observers remained tight-lipped when asked to identify the benefits.
Fico, however, also used the adoption of the budget to name those who, in his opinion, “have not moved a finger during the financial crisis to help Slovakia”.

The prime minister compared the country’s opposition to “foes who walk behind enemy lines armed with a knife”, producing proposals that would have only deepened the crisis, as quoted by the SITA newswire.

The budget was proved by the 150-member parliament with the support of 82 deputies of the 139 present on November 28. Fifty-six MPs voted against the budget.

The budget and the way it was passed has many unique features: it is not only the first budget that Slovakia will follow after adopting the euro as its currency, but its passage was preceded by the shortest debate ever, lasting just one-and-a-half days.

Ivan Štefanec, a deputy for the opposition Slovak Democratic and Christian Union (SDKÚ) described the process as undignified. He pointed out that, except for the finance minister, no member of the cabinet attended the discussion about the budget, not even the prime minister.

“The opposition submitted its revision proposals, but as has been the habit of this government, none of them were accepted,” Štefanec told The Slovak Spectator.

According to Štefanec, the most important proposal submitted by the opposition was one which specified that pension savings transferred to the state from people leaving the second pillar of the pension system (see below) is not spent by the government immediately, but instead deposited in an account with the National Bank of Slovakia.

Expenses should be cut, says analyst

Radovan Ďurana of the Institute of Economic and Social Studies (INESS) said that the budget was so pre-conditioned by existing legislation that the government had only limited options for not passing a lavish budget.

“On the one hand there is the influx of EU funds, which will inflate spending in 2009; on the other hand there is the lack of effort by the government to adopt saving measures, which would stop the growth of the expenses,” he said.

According to Ďurana, the only positive side of the budget is that the deficit target meets the criterion of the stability pact, a document that Slovakia has agreed to in association with its fiscal conduct in the monetary union.

The growth of expenses allocated to running the state, along with the growth in public procurement, which he said is still ineffective, were also among the negative features of the budget, according to Ďurana.

“A responsible manager cuts expenses during problematic times so that he does not incur losses due to falling revenues,” Ďurana said. “The Slovak government reacts exactly in the opposite way: it is not cutting expenses though its incomes are dropping.”

The higher deficit surprised neither senior analyst with the VÚB bank Martin Lenko nor Zuzana Holeščáková, an analyst with Poštová Banka.

Holeščáková said that the higher deficit in the state budget can be considered a direct result of the country’s slowing economic growth.

“The higher-than-planned public finance deficit, as a reaction to the financial crisis, has not come as a surprise to us, since the government decided to walk the simpler path and not to make cuts in planned spending” Holeščáková told The Slovak Spectator.

According to Lenko, other countries will face similar trends as a result of the financial crisis.
However, Lenko said that an objection could be made to the fact that the increase in the deficit is linked only to an expected drop in revenues and does not affect the spending structure of the budget.

“Considering the fact that we expect GDP growth to slow by more than the Finance Ministry does, and moreover that we see some risks of a further fall, lower budgetary incomes appear to us to be the highest risk,” Lenko told The Slovak Spectator. “At the same time the eventual unwillingness of the government to fix the spending part of the budget might lead to an even higher deficit. Because of that we regard the approved deficit as slightly optimistic.”

Since predictions for the growth of the economy were scaled down, it is expected that tax revenues, which form the largest part of the state’s income, will not reach the level originally planned, said Holeščáková.

“Still, it is arguable whether it is necessary to inflate the public finance deficit at a time of relatively high economic growth among both OECD and EU countries,” Holeščáková said. “The three-percent limit on public finance deficits set out in the Pact of Growth and Stability, an agreement between eurozone countries about coordination of their fiscal policies, we should be able to keep to without any problems.”

Given the approved deficit of 2.08 percent for 2009, however, Slovakia will not be able to cut the deficit annually by 0.5 percent, as the pact assumes, until it reaches a balanced budget in times of economic growth, she added.

Reaching a balanced budget by 2011 is becoming slightly more unlikely, she added.

“However, it is appropriate to note that next year’s planned deficit should be lower compared to the previous period and is historically the lowest planned deficit,” Holeščáková said.

In fact the state budget does not respond to the challenges of the financial crisis at all, Ďurana said, adding that the government’s reaction comprised a package of measures which “fails to reflect on the essence of the problem”.

“The higher deficit means higher indebtedness, which means higher interest expenses for future generations,” said Ďurana. “This budget also delays important reforms in the handling of public funds, which will be needed when the budget has to cover the expenses of pension reform and will not have enough funds from growing tax revenues, as it does now.

Use of pension money slammed

Critics of the budget poured scorn on the government’s plan to reap several billions of crowns in revenue from the departure of savers from the second pillar of the country’s pension system.
The Fico government reopened the second, or so-called capitalisation, pillar on November 15, allowing clients to transfer freely out of privately managed pension funds and return to the state-run pay-as-you-go system (or first pillar). The second pillar will remain open until mid-2009. The government says that private pension funds have been most affected by the current global financial crisis.

But pension fund managers and the opposition say there are no valid economic arguments behind the government’s move and have instead voiced suspicions that the real goal is to use the anticipated inflow of funds to plug gaps in the finances of the state-run social security provider Sociálna Poisťovňa, which administers the first pillar and is included in the public finances.

The Labour Ministry currently expects between 30,000 and 150,000 savers to quit the second pillar during the present re-opening.

According to Štefanec, the 2009 budget is the riskiest so far.

“On the income side, the anticipated sum of Sk10 billion from the accounts of people in the second pension pillar remains questionable while the government has not made the slightest effort to save money through cutting its costs.”

Štefanec said that the budget will not give any impulse to the economy, which he said is necessary during the current crisis.

The SDKÚ MP also thinks that the budget does not respond efficiently to the financial crisis.
“This crisis, which emerged due to bad debts, cannot be solved with additional debts,” Štefanec said. “Increasing the deficit is not the right reaction.”

Štefanec said that the budget does not really react to the financial crisis in any other way, and that this failure would very soon be reflected in people’s living standards.

“I am convinced that steps must be taken today to revert the slowdown in growth, which should be in the form of stimulating activities, most importantly through cutting direct taxes,” Štefanec said.