A taste of the Far East

SOUTH KOREA may be far from Slovakia in terms of kilometres, but the presence of companies such as Kia and Samsung here has made it much more visible over the past few years. Around 70 Korean companies employ around 21,500 Slovaks, according to information from the Embassy of the Republic of Korea, stirring interest in Korean culture. 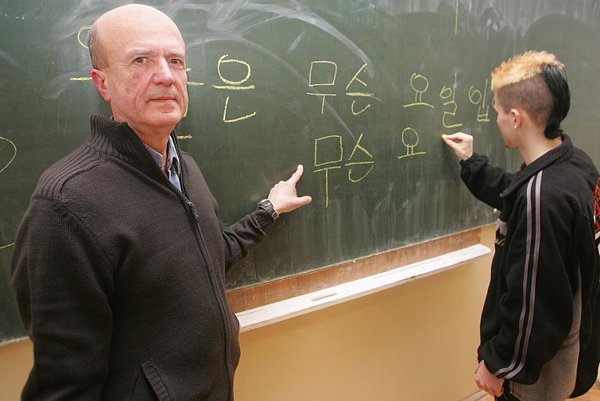 SOUTH KOREA may be far from Slovakia in terms of kilometres, but the presence of companies such as Kia and Samsung here has made it much more visible over the past few years. Around 70 Korean companies employ around 21,500 Slovaks, according to information from the Embassy of the Republic of Korea, stirring interest in Korean culture.

“Most of the Slovak workers are very interested in the Korean culture, lifestyle and language,” Sunghee Song from the embassy’s Department of Culture told The Slovak Spectator.

“Korean managers are interested in Slovak culture as well. They are trying to learn the Slovak language to have a better understanding of Slovak life and people. That’s why Korean firms try to organise various sporting and cultural events.”

Samsung, which is based in Galanta, and Kia, which recently built a car assembly plant in Teplička nad Váhom near Žilina, support the towns’ festivals to promote mutual understanding . The Korean Embassy helps organise the activities.

Other signs of Korea’s presence in Slovakia include film festivals, restaurants and grocery stores. There are some Korean courses available, and Slovak cable television providers broadcast Arirang, a bilingual Korean-English TV channel.

“Both countries want to preserve their traditional cultural heritage,” Song told The Slovak Spectator. “Slovakia has its traditional dance and folk music, such as the SĽUK ensemble and Lúčnica. Most Slovak towns have festivals with dancing and unique local costumes, such as the Východná festival. These events also attract Asian tourists.”

“During their performances, I saw some Slovak people and children dancing joyfully to the sounds of traditional Korean music,” Song told The Slovak Spectator.

“I believe that these cultural events contribute to better mutual understanding and friendship between our countries,” Song told The Slovak Spectator.

Korean films, which have been garnering attention and awards at prestigious film festivals, have also been successful in Slovakia.

From May 19-20, the Žilina Stanica Záriečie culture centre and the Korean Embassy co-organised the first Korean film festival.

“The festival was a success,” Peter Hapčo from the culture centre told The Slovak Spectator. “The interest matched the appeal of the films, because Korean filmmaking is very specific and very different from the commercial productions screened in multiplexes. So the audience wasn’t made up of the kind of people who usually go to see big-budget movies. They were looking for minority genres, as people who are interested in deeper films.”

Hapčo said the audience included Koreans, Slovaks who work at Kia and residents of Žilina. He added that those who work for Kia came to see what Korean films are like.

“Most of the audience was young people,” Hapčo told The Slovak Spectator.

The presentation of Korean film continued in Bratislava this November, with a three-day festival that featured films about family, crime and love.

One of the films was Secret Sunshine, whose lead actress, Do-Yeon, won the Best Actress Award at the Cannes Film Festival in 2007. Other people have gotten to know Korean culture better by studying the language.

Dana Škultétyová, the principal of a secondary school that focuses on business in Ilava, which is about 56 kilometres from Žilina, decided to organise Korean classes.

The school hired Jozef Gregor, a 68-year local who studied Korean at Charles University in Prague, to teach the classes, the Sme daily wrote.

“Koreans appreciate it very much when somebody knows at least basic phrases in their language and something about their culture,” Gregor told Sme.

There will be more opportunities in the future to study Korean in Slovakia.

Next spring, a Korean professor will give lectures on Korean history, language and culture at Comenius University in Bratislava.

The university has already received 40 books on Korea from the Korean Foundation.

Cuisine is another way to get acquainted with a foreign culture.

Žilina has a number of restaurants that serve Korean dishes, and there is a Korean grocery store in Bratislava.