I will be back soon, I promise

AN ELECTRONIC music pioneer, a multi-instrumentalist, a composer - Jean Michel Jarre exposed all these facets of himself at his concert in Bratislava on November 28. His performance was part of the second leg of a tour marking the 30th anniversary of the Oxygene album, which he released in 1977. 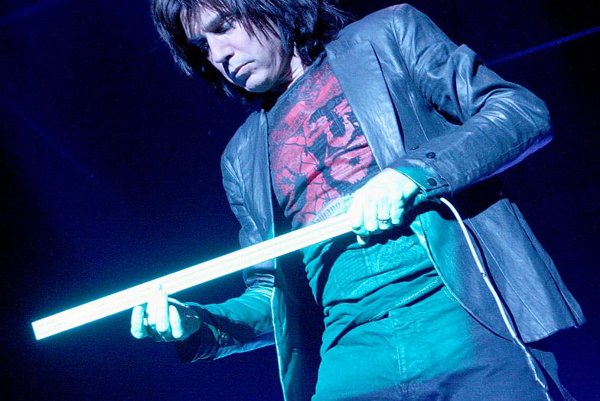 AN ELECTRONIC music pioneer, a multi-instrumentalist, a composer - Jean Michel Jarre exposed all these facets of himself at his concert in Bratislava on November 28. His performance was part of the second leg of a tour marking the 30th anniversary of the Oxygene album, which he released in 1977.

“Dobrý večer, Bratislava, it is a great honour to be in Bratislava tonight for the first time,” Jarre said at the beginning of the concert. “It is a great honour because for me it was a big dream for a long time to play in Czechoslovakia and then in Slovakia. The reason is that when I first released Oxygene, the first messages, appreciations, and encouragements did not arrive from America, but from behind the Iron Curtain, from Czechoslovakia, from Bratislava. This is why I am so excited to be here and sharing this evening with you.”

Jarre is known for his mega shows full of visual effects, with millions of spectators. He has held the Guinness world record for the largest concert audience three times. This tour, which Jarre completed in Warsaw on December 1, was more “intimate”, with concerts held in smaller halls accommodating “only” thousands of spectators. But in Bratislava it looked like he was trying to break another record – this time for the density of people squeezing into the completely sold-out Pasienky sports hall.

Jarre, in excellent condition and obviously enjoying the whole evening, played compositions from Oxygene, which is for many a seminal work of electronic music. He played the original analogue synthesizers, which, at the time he recorded the break-through album, were the most modern, but are now historical pieces. Apart from a number of synthesizers, he also played a theremin, one of the earliest electronic musical instruments, played without being touched.

The scene was simple, with synthesizers arranged in squares with Jarre's the biggest and in front of others. Within it he jumped from one instrument to another and played with the sounds. The concert was accompanied by moderate light effects, with blinking synthesizers on the stage and occasional video projections, including the visual of the Oxygene album - a skull inside a blue globe.

A large tilting mirror above the musicians enabled the audience to look inside ‘the kitchen where the music was cooked’.

The audience, which rewarded Jarre with a standing ovation, were treated to two encores after the show, of which the latter was the repeated version of one of Jarre’s best-known compositions – Oxygene IV.

“I will be back soon, I promise,” Jarre said when finally bidding farewell to the roar of applause.