Welcome to the euro

IF SLOVAKS decide to buy that extra bottle of champagne shortly after midnight on New Year's Eve, they will be charged in euros. Similarly, people leaving celebrations to welcome the arrival of the new currency in Slovakia will also have to pay for their bus tickets and taxis in euros. State officials are confident that both the public and businesses are well prepared to welcome the common European currency in Slovakia. 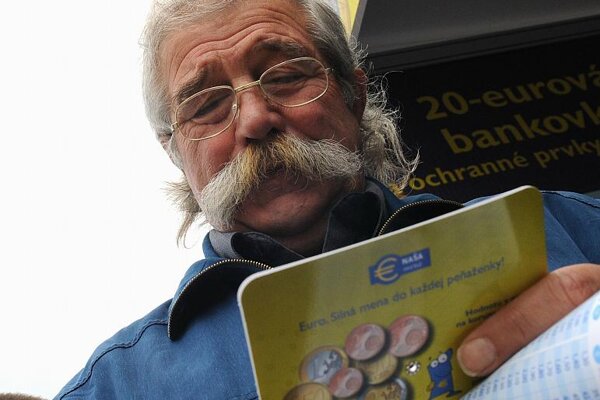 IF SLOVAKS decide to buy that extra bottle of champagne shortly after midnight on New Year's Eve, they will be charged in euros. Similarly, people leaving celebrations to welcome the arrival of the new currency in Slovakia will also have to pay for their bus tickets and taxis in euros. State officials are confident that both the public and businesses are well prepared to welcome the common European currency in Slovakia.

People are, according to a survey, well-informed about the euro and many of them anticipate smoother trade with foreign countries and less complicated international travel. When people in Slovakia worry about the euro-switch, they most typically envisage problems recognising coins or worry about their purses bursting with coins. Slovaks also say they are concerned about being cheated by retailers, according to the survey carried out by the Slovak Statistics Office.
Slovakia is nevertheless getting ready to see in the euro on January 1, 2009, with welcoming parties on some of the country’s town squares. The biggest celebrations promise to be in Bratislava, Igor Barát, the government’s plenipotentiary for adoption of the euro, told The Slovak Spectator.

Barát also confirmed that shortly after midnight on January 1, the very first ceremonial withdrawal of a euro banknote from a Slovak cash machine will take place. On January 8, Slovak Prime Minister Robert Fico will host a formal evening at the Slovak National Theatre for foreign and local guests to welcome the European common currency.

Speaking two weeks before the actual euro-switch, Barát was optimistic about the Slovak public’s preparedness for the new currency.

“I evaluate the public’s readiness as excellent,” Barát said, adding that the most frequently asked questions from the public concern the rules for dual crown-euro circulation and cash exchange.
Slovaks will be able to pay for goods and services with both Slovak crowns and euros from January 1 until January 16, though change should only be given in euros.

But even those who miss the 16-day deadline to dual circulation need not worry because the country’s central bank, the National Bank of Slovakia (NBS), will continue changing Slovak crowns.
Banks will automatically convert citizens’ deposits to euros, while in January people will receive their first paychecks in euros as well.

The nationwide information campaign will continue even after the switch to the euro, explaining to the public how to exchange money and also raising awareness about the higher value of euro coins.
As for the fate of the old Slovak banknotes, these will be collected and destroyed: the banknotes will end up as pulp and the coins as scrap.

“The National Bank of Slovakia will destroy the banknotes in several steps,” said Barát. “The result will be a pulped substance pressed into small blocks, which will subsequently be burned.”
Barát said that the coins will be physically degraded and sold as iron waste for further industrial processing.

During November 2008 between 88 and 91 percent of those polled said that information available about the euro was sufficient; even more said that the available information was comprehensible, according to a report that Slovakia’s statistics authority submitted to the government in December 2008.

The effect of the new currency on living standards was among the topics that interested the 1,335 people polled the most, with 37 percent expressing interest. Other questions that intrigued the public were how the euro would affect retail prices (32 percent), and the advantages and disadvantages of introducing the euro, the Statistics Office said in its report.

The dominant feeling among the Slovak public during November in association with the euro’s adoption was slight optimism, with 34 percent saying they felt good about it. However, running a close second was indifference, which during November dropped from 36 percent to 32 percent, the Statistics Office said.

About 40 percent of Slovaks in fact expected the adoption of the euro not to bring them anything new, while 25 percent viewed the switch as being more of an advantage than a disadvantage.

As for the positives that Slovaks hope the euro will bring, 41 percent listed the opportunity to make international travel less complicated, while 33 percent said easier business with foreign countries was an advantage, according to the Statistics Office.

The Slovak public continues to worry most about mixing up euro coins, being taken advantage of by retailers and having too many coins in their purses, with between 30 and 33 percent of those polled listing such fears.

As early as September the country’s banks reported that their information systems were prepared for the transition, and since August they have also conformed to dual-display pricing requirements in accordance with the law, Jana Kováčová, NBS spokeswoman, told The Slovak Spectator in September.
Slovakia began selling starter packs of euro coins to citizens and small businesses on December 1. The starter packs contain 38 coins worth an equivalent of Sk500.

A total of 500 million euro coins worth over €167 million (Sk5.031 billion) have been transported from the Kremnica mint to the NBS and selected banks. The central bank has borrowed banknotes worth over €7 billion (Sk210.9 billion) from Austria’s central bank Slovak households have also received information packs containing a euro calculator, enabling people easily to convert crown amounts to euros and vice versa, illustrations of the design of the new euro banknotes and coins, and conversion cards with which to calculate basic amounts in both currencies.

A heftier bill for the campaign

Meanwhile, the Slovak media has reported that the costs of the official information campaign have grown by Sk60 million (€1.992 million). The Finance Ministry has signed a contract with the Creo/Young & Rubicam, the firm managing the campaign, to increase funds for the campaign by Sk58.8 million excluding VAT, the SITA newswire wrote.

The project was originally slated to cost Sk180 million (€5.975 million). At the end of October, the government approved an increase of Sk15 million (€497,900) because of an earlier launch date for the campaign, and in order to provide higher quality euro calculators than originally planned.
The Finance Ministry said that the new funds are needed to cover some extra activities for which the need emerged during the course of the campaign, in order to reach the widest possible share of the public.

Barát suggested that even if the campaign is currently meeting its target and the public is well-informed the results need to be sustainable.

“It is important for us to maintain the high level of public access to information until shortly before the actual switch to the euro and also after it,” Barát said.

He also explained that some of the activities defined in the contract could have not been specified or defined two years ago when the contract was first outlined.