No snow, no money

THE SKI SEASON is slowly getting under way in Slovakia, with investments in new slopes, new lifts, cable chairs and, last but not least, snow-making facilities. The latter have turned out to be crucial for ski resorts which want to keep their clients happy. 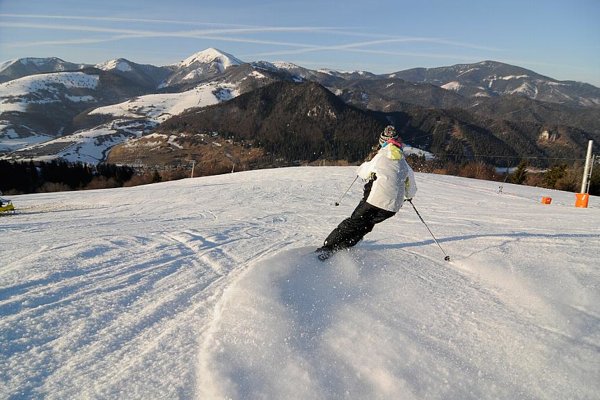 THE SKI SEASON is slowly getting under way in Slovakia, with investments in new slopes, new lifts, cable chairs and, last but not least, snow-making facilities. The latter have turned out to be crucial for ski resorts which want to keep their clients happy.

This winter has begun like the previous two: with little snow and relatively warm weather, leaving some ski resorts unable to cover their slopes even with the artificial snow produced by so-called snow guns.

Apart from the weather, ski resort-operators are also having to keep an eye on the effects of Slovakia’s transition to the euro as well as of the global economic crisis.

This winter, ski resorts in the High Tatras are expecting significantly fewer Russian tourists. Peter Chudý, the director of the Tourism Association High Tatras, told the SITA newswire that he thinks this is probably a response to the inadequate preparedness of ski resorts, in particular in the Smokovec villages and Tatranská Lomnica, for the main product of the winter season: skiing.
“Last year we attracted criticism in these two resorts from these guests, complaining that the main product, skiing, was not guaranteed 100 percent,” said Chudý.

“This winter we want to show visitors that the Tatras have prepared for the winter in terms of the ability of resorts to guarantee snow from the start until the end of the winter season.”

Donovaly in the Low Tatras, one of the country’s top ski centres, has been observing shortened stays, from seven nights to four or five nights, according to data from the local information centre. The largest numbers of visitors come from Poland, Slovakia, and the Czech Republic. Some tourists also travel from Russia and Lithuania. However, the number of Hungarians is reported to have decreased significantly.

In Vrátna in the Malá Fatra mountains, Martin Dubecký, the commercial director of the ski resort there says he hasn’t noticed any changes so far. But the resort’s visitors come mainly from Poland, the Czech Republic and Slovakia.

According to Zuzana Vyšná of Park Snow Liptovské Revúce in the Veľká Fatra mountains, some large Hungarian holiday companies have cancelled New Year stays, but their accommodation facilities are still completely booked up to the end of the year.

By the middle of December many ski resorts had yet to start their winter seasons at all. A third weak winter season could spell trouble for some resorts: all are therefore hoping that even if there is no natural snow, there will at least be freezing conditions which will allow them to make artificial snow using snow machines. Snow-making facilities have become a vital investment for most ski resorts, even those above 1,000 metres. For example Martinské Hole (1,150-1,450 m), which has been marketing its “natural skiing” for many years, is having to start the current season on artificial snow.

In Tatranská Lomnica the warm weather and technical problems have postponed the start of the season from December 6 to December 19. The attention of skiers is focused on the resort since the local operator Tatranské Lanové Dráhy has invested Sk330 million (€10.95 million) into an extension of the existing runs, new snow-making facilities and a new four-seat cable car from Štart to Čučoriedky (1,100-1,300m).

This is a part of a project which began five years ago to build a ski resort below Lomnický Peak comparable to medium-sized resorts in the Alps.

At Štrbské Pleso, skiers can look forward to a brand new ski run, the 1.8-kilometre-long Furkota (1,600-1,950 m) at Solisko. Last year, this High Tatras resort, was the only one in Slovakia which could boast a season lasting an almost unbelievable 184 days.

New snow guns are also in place in Donovaly in the Low Tatras, at Poludňový Grúň, in Vrátna in the Malá Fatra, and at Tatranská Lomnica and Štrbské Pleso in the High Tatras. However, without sub-zero conditions, even snow guns will not be able to save the season.

A brand-new ski resort at Vitanová in the Orava region is also launching a new four-seat cable car (720-900 m) this season. This green-field resort will offer a 1-kilometre-long ski slope with a camber of 228 metres, two lifts, the new cable car as well as other amenities and infrastructure.
The Skalka ski resort near Kremnica, a resort known for its rich snow and north-facing slopes, also has a new four-seat cable car.

At Martinské Hole, a six-seat cable car is just being completed in the upper part of the resort. It runs next to the longest ski lift, but ends a few metres below the top of the run; severe winter weather there can occasionally disable the lifts.

Jasná, the biggest ski centre in the Low Tatras (950-2,024m) is still awaiting re-connection of the two ski resorts there – on the southern and northern sides of the mountain range respectively. On the other hand, the ski slope from Dereše to Krúpová has been extended by 50 metres in width, and promises a thrilling experience in the form of a ski run with a camber as great as 1,000 metres.
On the southern side of the slopes at Jasná, near Jelení Grúň, the construction of the biggest snow-board park in Slovakia is planned for this year; and Donovaly will this season open a tobogan run in the Nová Hoľa locality.

Information so far indicates that even though each investment tends to put pressure on the prices of ski-passes, this season they should remain almost unchanged and will only rise in line with inflation.

If the Christmas season, during which prices are highest, is not taken into consideration, after skiers can normally enjoy the slopes in top resorts such as Donovaly, Jasná and Vrátna, for €25-31 per day. For this price they will have at their disposal about 11-15 kilometres of downhill courses.
In Jasná there are even more, with about 30 kilometres of runs when the whole resort is in operation. The price there, of around €30-35 per day, is equal to the cost of ski passes at medium-sized resorts in the Alps.

For information on skiing conditions go to www.spectator.sk or www.lanovky.sk

TWENTY years ago, piles of snow made it difficult to travel into the mountains for skiing. But nowadays, it’s hard to find a place to ski because there’s no snow at all. However, if recent weather is any sign of what’s to come, it seems as though Christmas will be white this year, at least in the mountains.

At the end of November, up to 50 centimetres of snow fell on ski slopes, causing people to begin looking forward to a ‘normal’ winter, but their delight eventually melted away with the snow. A snow layer of between 50 and 100 centimetres can only be found at altitudes above 1,400 metres, so only the Štrbské Pleso, Vrátna-Chleb, Chopok-Juh and Zverovka-Spálená ski resorts are reporting excellent skiing conditions.

Meteorologists aren’t predicting snowfall that would create a real winter atmosphere, but they expect at least frost and some snow. After Christmas, air from Russia will flow to Slovakia, making the weather dry and very cold. These are ideal conditions for snow-making machines. At the beginning, there will be light snowfall as temperatures slowly start to drop below zero. Later, temperatures in the mountains are expected to fall to -5 degrees during the day.

Since it is likely that slopes will be full of skiers, a winter hike along trails may be an option for holidaymakers. There is not a lot of snow, so, in sunny weather, a tour in snow-shoes may be an interesting alternative if your favourite ski resort is not in operation or is overcrowded.