AFTER 33 years Slovaks received another chance to enjoy the art of Comédie-Française. On its tour of new European Union states to mark the French presidency of the European Union, its actors performed in Bratislava on December 14 and 15. 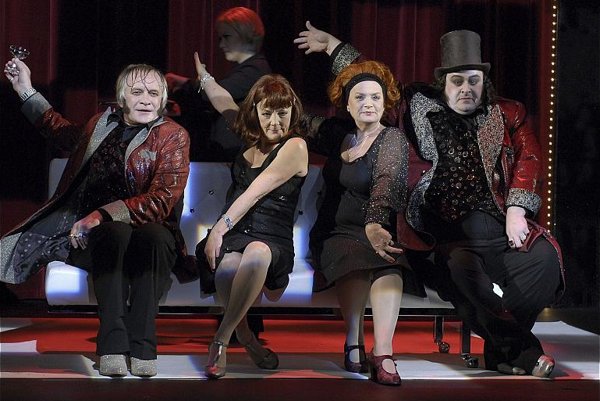 AFTER 33 years Slovaks received another chance to enjoy the art of Comédie-Française. On its tour of new European Union states to mark the French presidency of the European Union, its actors performed in Bratislava on December 14 and 15.

“Muriel Mayette, general administrator of Comédie-Française, picked two pieces for the tour,” Catherine Hiegel, one of the actresses of the prominent troupe, told Slovak journalists. The first was a play by Italian author Spiro Scimone, La Festa, directed by Bulgarian director Galin Stoev. The second was Les Précieuses Ridicules (The Pretentious Young Ladies) by Moliere, also directed by a foreign director, Dan Jemmett from Great Britain.

“You see, during this tour we present French theatre, Italian theatre and we have Bulgarian and British directors, so this a pan-European issue,” said Hiegel. “We have joined these two pieces into one evening because we think that one of them is supremely topical and, even though the second is a historical piece by Moliere, its production is modern and we think that these two plays are able to captivate audiences in Bratislava as well as in the remaining nine countries of Central and Eastern Europe.”

The plays were selected because these pieces show the best qualities of Comédie-Française and demonstrate that it is neither fossilised nor fusty.

“Our theatre is also exploring and searching,” said Andrzej Seweryn, another actor of the prominent troupe, during a meeting with journalists.

“Translation is the language of Europe” by Umberto Eco was quoted on the subtitle panel at the beginning of the evening, but it showed that small misunderstandings can still happen, as when the hosting theatre, the Slovak National Theatre, left the proscenium, the well in front of the stage, open. This separated the audience a bit from the actors and the plays, which are meant for a more chamber-like atmosphere.

But this did not spoil the enjoyment by the audience of the first-rate performances of the French actors displaying differing facets of their art. In the first play, the members of this more than 300-year old troupe performed a piece by a contemporary Italian author. It addresses family relationships and how biting they can be, as seen during a couple's 30th wedding anniversary party. The stage was minimalist and the performances of Catherine Hiegel, Gérard Giroudon and Serge Bagdassarian were superb as the mundane characters they played were closed in their own worlds, drowning in selflessness, powerlessness and attempts to find themselves.

Moliere's Les Précieuses Ridicules showed a different face by the troupe. Director Jemmett pushed the classical comedy about naive village ladies who have come to Paris in search of love, into a cabaret style and into the era of rock-and-roll. The costumes were extravagant and the poses stylised. Moliere wrote this play 349 years ago but it has not lost any of its satiric needles. Comédie-Française successfully transferred its plot to the presentday when poses, mannerism and shallowness can be presented as a “cool style”.

The evening was “la festa” in the true meaning of the word.