From Balkans to cabinet

MIROSLAV Lajčák was appointed Slovakia’s new foreign affairs minister on January 26, replacing Ján Kubiš. Lajčák is currently serving as the High Representative of the International Community in Bosnia and Herzegovina. It is the sixth ministerial personnel change since the government of Robert Fico took office in June 2006. 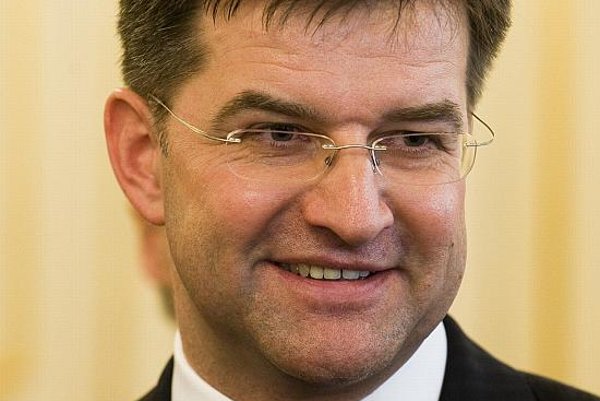 MIROSLAV Lajčák was appointed Slovakia’s new foreign affairs minister on January 26, replacing Ján Kubiš. Lajčák is currently serving as the High Representative of the International Community in Bosnia and Herzegovina. It is the sixth ministerial personnel change since the government of Robert Fico took office in June 2006.

Lajčák, who was proposed by Prime Minister Robert Fico, was appointed to his new post by President Ivan Gašparovič. Political analysts do not expect any change in foreign policy following the replacement.

Fico said he believes the foreign affairs minister will, during the current economic crisis, be concentrating much more on economic topics than has formerly been the case. The EU and other international organisations will be focused mainly on the crisis in the near future, Fico told a press briefing after Lajčák’s appointment.

Fico also said he does not fear differences of opinion will arise with the new minister.

“With Mr. Lajčák, we have checked basic Slovak standpoints, and a simple principle for us is EU and NATO membership,” Fico stressed for The Slovak Spectator. “I welcome Mr. Lajčák on board, but primarily in connection with the financial and economic crisis.”

“Thus, it is good to have a foreign affairs minister who is generally famous, who has personal contacts with his counterparts,” Fico said, explaining his choice to journalists.

“The first priority for all of us, including the foreign affairs minister, is how to cope with the impacts of the crisis,” Lajčák said after being appointed by the president.

The dominance of economic issues in international relations is also referred to in a Foreign Affairs Ministry document on the aims of Slovakia's foreign policy in 2009.

Lajčák’s first foreign trip will be to the Czech Republic, though he did not announce the exact date of the visit. He also plans to meet Hungary’s foreign affairs minister, Kinga Göncz, as soon as possible. They will try to look for ways to improve Slovak-Hungarian relations.

“There is much more that we have in common, and we should not make space to concentrate on what has been dividing us,” Lajčák said.

Slovak-Hungarian relations have suffered since the formation of the present government, which includes the Slovak National Party (SNS), whose leaders have expressed openly nationalist and anti-Hungarian views. However, Lajčák said that he does not object to SNS participation in the governing coalition.

“I am proud to be a member of the government of the Slovak Republic,” he stressed in comments to The Slovak Spectator. “I had a talk with the prime minister, in which we defined our foundations, priorities, his expectations towards me when heading this ministry - and all that led me to accept the offer.”

In the next two months, Lajčák will – in addition to his ministerial post – continue to hold the position of high representative of the international community in Bosnia and Herzegovina. He agreed with Fico that he will remain in Sarajevo until February 6.

Lajčák added that his mission would end with a meeting of the Peace Implementation Council (PIC) planned for March 25 and 26. The name of his successor in Bosnia and Herzegovina is yet to be announced.

Following the successful negotiation of the Dayton Peace Agreement in November 1995, the PIC was established during a conference in London on December 8-9, 1995. It comprises 55 countries and agencies that support the peace process in different ways: by assisting it financially, providing troops for the SFOR military contingent, or by directly running operations in Bosnia and Herzegovina. There are also a fluctuating number of observers.

“I perceive the name of Miroslav Lajčák very positively. He is one of the top Slovak diplomats,” Dzurinda said at a press conference on January 23.

Political scientists also welcomed Lajčák’s appointment. According to Alexander Duleba, head of the Research Centre of the Slovak Foreign Policy Association, Lajčák is a very good choice. Security policy expert Ivo Samson expressed his opinion that the foreign policy of Slovakia would continue developing in the present direction.

“So far, nothing has shown that there will be a break in Slovak foreign policy,” Samson told The Slovak Spectator.

Political analyst Peter Horváth of the University of Saints Cyril and Method in Trnava told a Czech newswire that Lajčák would preserve the global framework of Slovak foreign policy.

“Perhaps he will be more oriented towards the Balkans,” Horváth said.

Lajčák, who is 45, began his career as a diplomat at the Czechoslovak embassy in Moscow. Later, he worked in Japan and the former Yugoslavia. He became the UN and EU high representative in Bosnia and Herzegovina in 2007.

After leaving his post as minister, Ján Kubiš will now become the executive secretary of the UN Economic Commission for Europe (UNECE) in Geneva.

UN Secretary General Ban Ki-moon announced Kubiš’ appointment to the role on December 19 last year. However, the move was delayed when Kubiš agreed to stay on temporarily during the energy crisis which erupted in January after a dispute between Russia and Ukraine over natural gas halted supplies to Slovakia.

The UNECE is one of five UN regional commissions supporting dialogue and co-operation between 56 states in a wide framework of spheres, including economic integration, the energy sector, environment and business.

In 2002-2005 the post of UNECE executive secretary was held by former Slovak finance minister Brigita Schmögnerová.

Before her, the position was held by Danuta Hübner of Poland; Schmögnerová was succeeded by Marek Belka (also from Poland), whom Kubiš replaces.