THE SITUATION in the publicly owned broadcaster Slovak Television (STV) is even more critical now than it was nine months ago, before Štefan Nižňanský was elected the new general director and STV was leaderless. 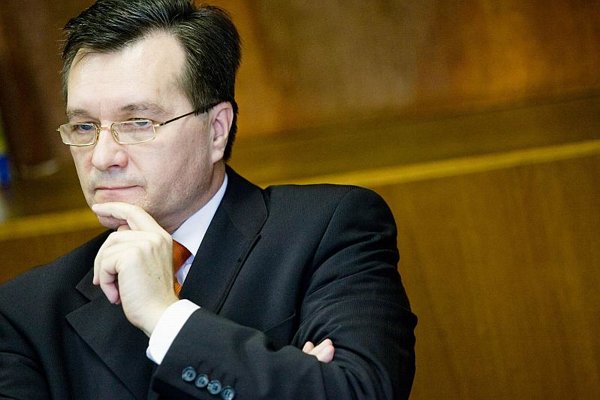 THE SITUATION in the publicly owned broadcaster Slovak Television (STV) is even more critical now than it was nine months ago, before Štefan Nižňanský was elected the new general director and STV was leaderless.

STV is in a critical financial situation, with the budget for this year still to be approved. According to information published on STV’s website, the broadcaster’s debt is €8.73 million (Sk263 million).

Nižňanský came within one vote of being dismissed during a meeting of the STV Council in late January. Nine council members expressed no-confidence in the general director; ten votes out of fifteen were necessary to remove him.

The STV Council is the controlling body of the public television system.

Immediately afterwards, MPs initiated a move to have the Supreme Audit Office (NKÚ) check the financial condition of STV.

On January 23, Nižňanský gave the council two versions of the budget for 2009. The first version was a crisis one, and according to it, STV would fire one-third of its employees, cancel its sports channel Trojka, and terminate its own productions and broadcast mainly re-runs. In the second budget version, Nižňanský counted on a subsidy from the state budget amounting to €20 million (Sk602 million).

This amount would be one-third of the entire current budget, according to the Pravda daily.
None of the council members supported Nižňanský‘s proposals and the council ordered STV management to complete the crisis version of the budget.

Bohumír Bobocký, chairman of the STV Council during the meeting, told journalists afterwards that STV management had first to look for internal reserves.

Marián Tkáč, a member of the council, agreed that Nižňanský, together with STV management, is counting on money from the state.

“But the state will not give the money,” Tkáč emphasised during the meeting. “If I was head of STV, I would resign.”

“Television has been declining in all important parameters,” Kákoš stated. “The number of viewers has been decreasing, it fails to fulfil its legal duties, and its financial condition is on the verge of bankruptcy.”

When council chairman Bobocký later resigned at the meeting, Kákoš was immediately elected as the new chairman.

By not declining to approve either of the budget proposals, the council did not authorise the impending sackings in STV.

After the meeting, Nižňanský told journalists in the STV lobby that he did not intend to resign.
“I will fight and do my best so that STV works,” Nižňanský stressed.

“And I will claim the support of those bodies which bear one part of the responsibility for that.”

Last year, Nižňanský asked for Sk162 million (€5.38 million) from the state budget but was unsuccessful.

Finances to be checked

A few days after the council meeting, on January 27, MPs of the parliamentary Committee for Culture and Media agreed that STV’s financial status needs to be examined by the NKÚ.

The chairman of the committee, Pavol Abrhan, of the opposition Christian-Democratic Movement (KDH) party told journalists that the NKÚ would start inspecting STV’s financial condition as early as February. The basic problem between the STV Council and STV’s management is due to different views on how to use effectively the available finances, Abrhan said.

Members of parliament went to inspect STV twice last year – once on November 11 and once on December 11. However, during the latter visit, MPs did not find out what they wanted to know from STV's supervisory board, the body which oversees STV finances.

Members of STV’s supervisory board, who are supposed to oversee the decision-making of STV management, boycotted the parliamentary inquiry and refused to meet MPs during the visit.

Dušan Jarjabek of the ruling coalition party Smer and vice-chairman of the parliamentary committee expressed his concern about the supervisory board’s members boycotting the parliamentary inquiry and that MPs did not learn anything, for instance, about the advantages or disadvantages of contracts that have been signed between STV and external partners.

But SNS MP Rafael Rafaj disagreed. He said that the results of the parliamentary inquiry did not confirm the rumours about STV mismanagement of the entrusted finances.

“I haven’t got relevant facts, nor any information that would enable me to state that someone in STV acted illegally,” Rafaj said during the parliamentary committee’s session.

Former members of STV management Petronela Kolevská and Elena Šramková have talked about such practices, however. They have criticised what they call disadvantageous and overly expensive contracts.

They said that the contracts were concluded with the slogan in mind that “others’ property does not bleed”. Nižňanský fired both of them last autumn.

These former managers say that the head of the production department, Juraj Dobiš, is to be blamed. Although STV general manager Štefan Nižňanský first refused to put such blame on Dobiš, he was removed from his post on January 27. Dobiš failed to give any reasons for his departure. Nižňanský also refused to explain to The Slovak Spectator why he had sacked Dobiš.

Bobocký told the Aktualne.sk that information provided by the management of STV has not been complete and true.

“They gave information to both the media and to MPs that there was more than €2 million on the account of STV on December 31, 2008,” Bobocký said. “They did not mention, however, that invoices amounting to about double this amount remained unpaid. Investments of about €1.3 million were shifted.”

Vice-chairman of the STV Council Peter Malec voted against Nižňanský's sacking. But he is convinced that the current state of the public television system is desperate.

“Financially, STV is under-funded, and this has nothing to do with whoever leads it at the moment,” Malec told The Slovak Spectator. “It makes no difference who will be in charge let’s say in three or four months as he will face the same problems.”

According to Malec, the Culture Ministry is giving no subsidies from the state budget to STV, as the ministry wants to force the current general manager to resign.

Miroslav Kollár, chairman of the STV Council until January 2007, agrees with Malec that at the moment it makes no difference who heads STV.

“The simple reality is that today, whoever might be head of STV, that person cannot make STV to be as all others wish,” he told The Slovak Spectator.

“STV simply has neither the legislative nor the economic environment for that.”

But Malec said this did not violate any requirement to present a plurality of opinions. According to Malec, STV simply chose this model for an interview with the prime minister.

Kollár stated that Nižňanský has not behaved as a responsible manager should.

The current management's mistake, Kollár said, was to start talking about its financial troubles only after STV’s debts grew to several million euros.