NEW RULES came into force on Slovakia’s roads on February 1 with the primary goal of reducing the country’s high rate of accidents. The speed limit in towns and villages has been lowered to 50 kilometres per hour from its previous limit of 60, headlight use is required year-round and new rules for winter tyres are among the most significant changes. Fines for minor offences have been increased. 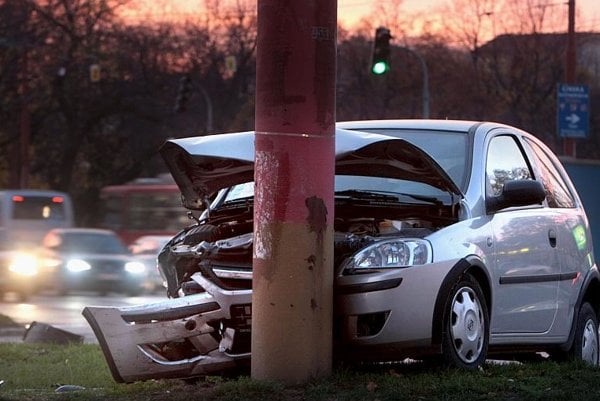 NEW RULES came into force on Slovakia’s roads on February 1 with the primary goal of reducing the country’s high rate of accidents. The speed limit in towns and villages has been lowered to 50 kilometres per hour from its previous limit of 60, headlight use is required year-round and new rules for winter tyres are among the most significant changes. Fines for minor offences have been increased.

Transport analysts and the police view the new Road Traffic Act positively and say they expect fewer traffic accidents as a result, fulfilling a commitment made to the European Union, which asked Slovakia to reduce the number of people killed in road accidents to less than 305 by 2010. Last year, 558 people died in traffic accidents and 1,794 were seriously injured.

Interior Minister Robert Kaliňák told journalists that adopting this act was fundamental and that it would become a weapon against what he called road pirates.

“We don’t want drivers to behave arrogantly only because they feel they can afford it,” Kaliňák told the Sme daily.

Reducing the speed limit in municipalities should protect the lives of pedestrians. Slovakia and Romania were the only two EU countries where the maximum speed in municipalities remained 60 kilometres per hour, Kaliňák said.

According to police statistics 194 pedestrians died on the roads in 2006; a year later this number went up to 207; and last year 184 pedestrians were killed by moving vehicles.

Martin Korch, a police spokesman, told The Slovak Spectator that it is a good law, required by the circumstances and by the times.

“Due to the development of road traffic it is necessary to apply these new rules in practice,” Korch explained to The Slovak Spectator. “The philosophy and essence of the act aims at safer and smoother traffic on one hand and strict punishment for so-called ‘un-teachable’ road pirates on the other hand.”

Korch further remarked that the new act on road traffic was just one part of a broader system of measures aimed at decreasing the fatalities on Slovak roads.

“We must also add to the effectiveness of the police, which basically means increasing the number of transport and highway police officers and equipping them with new technology,” Korch said.

He added that due to the systematic measures of the police last year that the total number of road accidents had decreased.

“Better police enforcement and the new Road Traffic Act offer the likelihood that the alarming number of accidents on our roads will keep decreasing,” Korch said.

Korch rejected criticism that has been levelled at the act. He said it was prepared by experts and has now passed through the legislative process.

Transport analyst Ján Bazovský also thinks that the new act was necessary. He explained to The Slovak Spectator that it was the radically changed situation on Slovakia’s roads that required the new law and that all countries in central and eastern Europe have experienced this.

“Each country’s transportation norms need to react to such changes, so it was really high time for Slovakia to make a new law on road traffic,” Bazovský stressed. “Even legal terms in the old law did not reflect the real conditions of transport on our roads.”

Paradoxically, a few days after the new road law came into effect, a video shot by journalists from the Pravda daily showed the car of Interior Minister Robert Kaliňák clearly violating the speed limit within a municipality. According to the journalists, the car was travelling at more than 100 kilometres per hour.

Kaliňák expressed regret when he was asked by The Slovak Spectator about the car’s excessive speed, while adding that someone else was driving.

“It is true that it makes a bad impression, especially when the new Road Traffic Act was coming into effect.” Kaliňák told The Slovak Spectator. “The driver of the ministry car, in fact a police officer from the Office for Protection of Public Officials, was acting in compliance with the law, however.”

On February 3, the day the story was published in Pravda, the ministry had sent a statement to newswires describing the story as “tendentious” and saying that the paper would be sued.

Cyclists must now wear protective helmets when riding outside municipalities and children under 15 must wear a helmet at all times while cycling, even in towns and villages.

When there is low visibility, both pedestrians and cyclists should wear reflecting items or reflective clothing so that drivers can spot them more easily. If they are not wearing reflective markings, they can be fined up to €60, police spokesman Viktor Plézel told the financial daily Hospodárske Noviny (HN).

The law bans anti-radar devices which warn drivers that police are measuring the speed of cars with radar. The fine for using such a device is €130. If a driver is found with an anti-radar device fitted in their car, the police can confiscate the car’s registration certificate. Anti-radar devices can cause serious car accidents, according to Plézel.

“If a car is going at 160 kilometres per hour and an anti-radar device warns the driver about a police radar and the driver brakes abruptly, the car behind can crash into the vehicle at a high speed,” Plézel told HN.

The new act also introduces a fine of up to €60 for drivers using insulting gestures, for example, knocking on one’s forehead or using a pointed middle-finger while behind the steering wheel. Such gestures can also cause collisions, according to transportation analyst Bazovský.

“Imagine, for example, the aggressive driving of a road pirate, who pushes you out of the road, and then even rolls down the side window and makes a silly gesture,” Bazovský explained. “From this, a dangerous situation can emerge.”

The fine for exceeding the speed limit by more than 70 kilometres per hour will be €650. If a driver refuses to undergo a breath test for alcohol, the fine will be between €300 and €1,300. Fleeing the site of an accident carries a fine of €1,300, according to a list published in the daily Nový Čas.