The ‘rocking chair’ under the construction minister

DISSOLUTION of the ruling coalition is not looming, the three chairmen of the coalition parties emphatically state. But the chair under the Minister of Construction and Regional Development Marian Janušek, a nominee of the Slovak National Party (SNS), is rocking violently and the SNS is not happy about it. 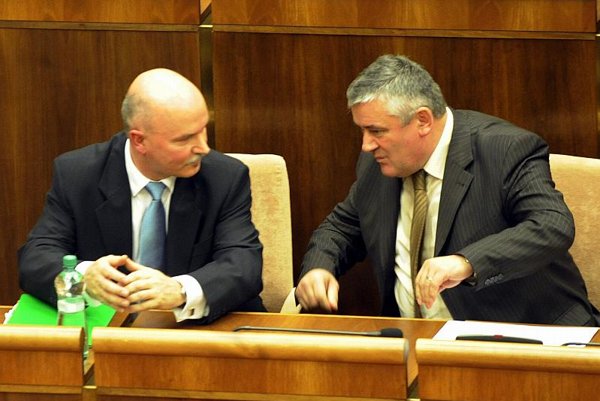 DISSOLUTION of the ruling coalition is not looming, the three chairmen of the coalition parties emphatically state. But the chair under the Minister of Construction and Regional Development Marian Janušek, a nominee of the Slovak National Party (SNS), is rocking violently and the SNS is not happy about it.

Moreover, Vladimír Mečiar, chairman of the Movement for a Democratic Slovakia (HZDS), is claiming that the SNS will finance its future election campaigns from funds taken from the European Union. Together with Smer, SNS and HZDS are members of the ruling coalition.

And an expert says that in Slovakia the drawing down of EU funds is becoming less and less transparent and smacks more and more of blatant cronyism.

Several months ago, the construction ministry announced a public tender worth €119.5 million (Sk3.6 billion) for consulting and legal services, using EU funds – but the tender was posted only on a bulletin board in the ministry’s building; a building to which the general public has no access.
The tender was won by a consortium which includes two companies, Zamedia and Avocat, which are close to Ján Slota, the chairman of the SNS. Slota admitted to journalists several months ago that he did indeed have influence on Zamedia as he confirmed that he had himself organised a change in the legal representative of the company.

“Slota and his minister have made grave mistakes,” Mečiar said, adding that as soon as the EU learns about this, the money could be taken away from Slovakia.

SNS disputed Mečiar’s accusation. Politicians from SNS claim that the financing of their party is transparent.

Mečiar does not agree. According to him, the amount charged by the consortium that won the tender is three to four times more than it should be.

“When I look at what has been financed from this contract – and if these relations are to last until 2015 – then Slota can easily finance his election campaigns in 2010 and 2014 from the money of the European Union,” Mečiar told the public broadcaster Slovak Television (STV) on February 1. “He will have the most of all of us.”

Mečiar stressed that he had factual objections towards the tender, not personal animosity towards minister Janušek. Neither, he said, did he have the intention of setting the coalition members against each other.

“Slota is Slota; I have a coalition partner – I have not chosen him,” Mečiar continued in the STV discussion show.

The day after Mečiar’s statements were broadcast, Prime Minister Robert Fico stated, after a coalition council session, that he would recall Janušek from the cabinet if inspections of the construction ministry confirm that the law was violated, repeating a statement he had made last year.

Mečiar, however, responded to Fico’s statement that the issue was clear to him even without any results from the inspections, because he (Mečiar) had been a lawyer.

“I see a violation of law in the contract and also in the way the money is to be used,” Mečiar told the news briefing after the coalition council session.

Slota did not agree that relations in the coalition had worsened. He criticised journalists for dealing with such “trivial and funny issues” in times of financial crisis.

“I can’t understand why you are concerned so much about the fate of this coalition, and how you would like to break it, split it as quickly as possible,” Slota told journalists, as quoted by the SITA newswire.

According to Fico, the chairmen of all three coalition parties are “sensible enough” not to be tricked by journalists’ “rubbish” and that the coalition will continue to work.

In a recent interview with the Hospodárske Noviny (HN) economic daily, Janušek admitted that he had discussed the tender with chairman Slota.

“In the party, we discuss everything that concerns the ministries for which SNS is responsible,” Janušek explained to HN. “In the case of our ministry, for example, he cares a lot about drawing down the EU funds effectively and well.”

Neither the Supreme Audit Office (NKÚ) nor the Public Procurement Office (ÚVO) has thus far published the results of their inspections of the construction ministry.

The release of results from ÚVO has been delayed due to the fact that the head of the Inspection Department of ÚVO, Mária Vermešová, was removed from her position when she refused to sign the inspection protocol. Vermešová said she refused to sign the document because she did not agree with its conclusion that the Ministry of Construction had violated the law, HN wrote.

Helena Fialová, ÚVO spokesperson, told The Slovak Spectator that the working group which made the inspection was responsible for the report, not the department head.

Asked by The Slovak Spectator whether publishing of the tender only on a bulletin board at the ministry was a violation of law or not, Fialová refused to answer.

“By doing so, I would preempt the official publication of the inspection’s results,” Fialová responded.

According to Fialová, the inspection group was currently analysing the point of view of the former department head. Later, they would provide the inspection protocol to the ministry, which will be able to comment on the findings and conclusions.

“Only after the protocol has been discussed and signed by both the inspected party and the inspectors, will the inspection be officially completed,” Fialová said.
She added that ÚVO is not able to give a date for when this would happen.

Opinion from an expert

Dušan Sloboda of the non- governmental think-tank Konzervatívny Inštitút (the Conservative Institute) told The Slovak Spectator that posting a public tender on a bulletin board was not acceptable. He added that a pre-condition for Slovakia’s accession to the EU was to respect the proper transposition of EU directives into Slovakia’s Act on Public Procurement.

“Thus, the procurement should have been made within this EU framework,” Sloboda added.

The Finance Ministry had warned that it considered similar tender publications placed only on bulletin boards to be a violation of the Act on Public Procurement, he said. The Finance Ministry plays the role of 'certifier' when it comes to expenditure of EU funds, verifying justification for the expenditures.

“In cases like this, when a tender is announced, so to say secretly, in a way that only the closest round of interested entities learn about it, the activities of the tendering office always smells of cronyism,” Sloboda stressed.

“A multi-billion [Slovak crown] order, where only a single entity shows interest, moreover one politically connected to the party of the tendering office, is an example of a tender announced with the intention to giving the contract to a specific ‘client’.”

Sloboda added that Janušek should have resigned long ago.

“This current waiting for the results of the NKÚ and ÚVO inspections is a blatant mockery and a laugh in the public’s face,” Sloboda said.

Sloboda has been saying for some time that even the previous government of PM Mikuláš Dzurinda had not striven too hard for transparency in drawing down EU funds. The trouble is that Slovaks are apathetic towards cronyism, according to Sloboda.

“Corruption and cronyism in the use of EU funds are covered up and permitted by laws which are still too benevolent towards these phenomena; their legal framework does not push the public administration to act transparently enough,” Sloboda said.

The European Commission has, according to Sloboda, certain opportunities to suspend payments from EU funds, as it did, for instance, in the case of Bulgaria last year. Unfortunately, certain cronyism appears in the EU also, Sloboda said.

It is important to launch more transparency in the use of EU funds, Sloboda added. But he said he does not see such an effort at Slovak ministries. Just recalling Janušek alone would not wipe out cronyism from the construction ministry, according to Sloboda.

“Minister Janušek is only a puppet in his chair,” Sloboda opined.

“If there was an interest in establishing at least basic transparency in the use of EU funds, ministries would automatically publish on their websites the results of all tenders, as well as their evaluation procedures when choosing the winner,” Sloboda stressed.

Sloboda considers citizens’ apathy to be the worst aspect of the controversy surrounding the Construction Ministry tender.