Crisis and Hungary top the agenda

SLOVAKIA'S membership of the European Union (EU) and the North Atlantic Treaty Organization (NATO) are the strategic underpinnings of the country’s foreign policy and continuing this orientation and softening the impacts of the global economic crisis are the key priorities, said the new Foreign Affairs Minister of Slovakia, Miroslav Lajčák. He also told his first press conference that he will be discussing mutual problems with Hungary. 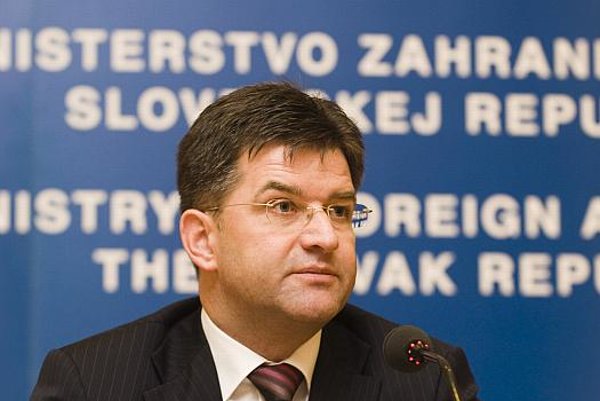 SLOVAKIA'S membership of the European Union (EU) and the North Atlantic Treaty Organization (NATO) are the strategic underpinnings of the country’s foreign policy and continuing this orientation and softening the impacts of the global economic crisis are the key priorities, said the new Foreign Affairs Minister of Slovakia, Miroslav Lajčák. He also told his first press conference that he will be discussing mutual problems with Hungary.

Three aims of the ministry in these times of economic crisis are, according to Lajčák, supporting Slovakia’s exports, keeping Slovakia’s existing international investors, and at the same time attracting additional foreign investments.

“I can assure you that there is no international forum which would not have the international economic crisis as its number one issue. We have made the first steps in this regard,” Lajčák told the journalists.

Many businesses operating in Slovakia have experienced a lower demand for their products from abroad and several have announced significant layoffs and production cuts.

Lajčák said he intends to improve conditions for the export of Slovak goods and to give new stimulus to better communications with Slovakia’s key trading partners.

“I wish him good luck and success, because so far I have considered various statements about the economic dimension of diplomacy and similar things to be rather empty phrases,” Kukan told the public broadcaster Slovak Radio.

Kukan added for that this role was not typical for a foreign affairs ministry.

The former permanent representative of Slovakia to the United Nations Office in Geneva, Kálmán Petőcz, shares this opinion.

“The Economy Ministry has a whole team to deal with this,” Petőcz told The Slovak Spectator.
Lajčák said that Slovakia has not changed its stance on Kosovo, whose independence the country has refused to acknowledge.

Slovakia belongs among those countries in the EU opposed to Kosovo’s independence, and it does not plan to change this position, Lajčák said.

“We do not acknowledge the unilaterally-declared independence of Kosovo,” he said.
Lajčák added that together with its EU partners Slovakia will pursue rational and pragmatic lines of building mutual relations with Russia and Ukraine.

The pillars of EU and NATO membership are the foundation upon which Slovakia will build in the future. But Slovakia will also look toward its very active cooperation with the other three countries of the Visegrad group, Hungary, the Czech Republic and Poland and with Austria, as well, said Lajčák.

Lajčák stated that he wants Slovak-Hungarian relations to be seen as correct, friendly and allied, as they are in fact.

He said that he aimed to discuss issues “with a cool head, and rationally”.

Bilateral relations between Slovakia and Hungary have been complicated and tense since the summer of 2006 when the nationalist Slovak National Party (SNS) became a member of the ruling coalition.
"We consider it incorrect and a mistake to reduce our relations just to tensions or problems that stem from our different interpretation of history,” Lajčák said.

When asked by The Slovak Spectator whether these relations were not complicated by some anti-Hungarian statements made by SNS chairman Ján Slota, Lajčák answered:

“Every action provokes or causes a reaction; and every statement has its consequences and that is what we all must bear in mind.”

“Instead of bombastic statements or some declarations, I think we should return to the letter and spirit of the basic treaty we signed,” Lajčák added.

The basic treaty on good neighbourly relations and cooperation signed in March 1995 is, according to Lajčák, the foundation for good Hungarian-Slovak relations.

“No sensible human being can be interested in disrupting them [good relations].”

He added that Hungarian Foreign Affairs Minister Kinga Göncz has already invited him to Budapest and that they will meet in the near future. Prime Minister Fico will also visit Budapest in the first six months of 2009, Lajčák said.

Lajčák considers the controversial issue of geographic names in textbooks to be resolved. This issue has been a thorn in the side of the Hungarian minority in Slovakia and then with Hungary itself since 2008 when Education Minister Ján Mikolaj (SNS) ordered that geographical names used in Hungarian language textbooks must be in Slovak.

According to Lajčák, MPs sent a strong and positive signal when they twice passed an amendment to the Education Act which stipulates the writing of geographical names in textbooks for minorities first in their mother tongue and then in the official state language.

“Everything else is a matter of administration,” Lajčák told The Slovak Spectator. “The law applies to everyone and everyone has to respect it. So I do not look for pointless dilemmas, where there are none.”

With these words, Lajčák alluded to the reluctance of Education Minister Mikolaj to accept these changes in the law and to order the replacement of the textbooks.

Petőcz also told The Slovak Spectator that Hungarian-Slovak relations should be primarily anchored in the basic treaty.

However – as he pointed out – the question of textbooks used in Hungarian schools should not have made it to bilateral talks at all. It should have been solved within the domestic politics of Slovakia.

The problem persists, Petőcz said, that in Slovakia there is no competent public body that deals with issues of minorities. There is just the Government Council for Ethnic Minorities but it is only an advisory body of the deputy prime minister and it has practically no executive power or authority.

Political analyst László Öllős told The Slovak Spectator that because of the structure and composition of ruling coalition, Lajčák is in situation similar to his predecessors during the term of Vladimír Mečiar’s government with its elements of authoritarian and nationalistic rule.

Öllős remarked that the “radical SNS keeps inventing ever new attacks against the Hungarian minority, and as a member of the ruling coalition it influences the functioning of the Slovak cabinet as a whole”.

“Lajčák has to defend the indefensible,” Öllős said.