DETAILS of a contract worth hundreds of millions of euros, the outcome of the biggest tender in Slovakia’s history, for which only one bid was finally accepted, will not be released to the public.The Transport Ministry and the National Highway Company (NDS) have said the contract is a commercial secret. But non-governmental organisations are sounding the alarm, saying that by not releasing details about the contract, the law on public access to information is being blatantly violated. 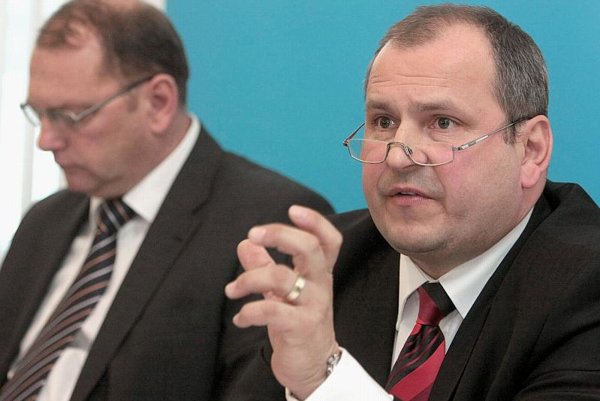 DETAILS of a contract worth hundreds of millions of euros, the outcome of the biggest tender in Slovakia’s history, for which only one bid was finally accepted, will not be released to the public.
The Transport Ministry and the National Highway Company (NDS) have said the contract is a commercial secret. But non-governmental organisations are sounding the alarm, saying that by not releasing details about the contract, the law on public access to information is being blatantly violated.

The controversy involves the tender to build and launch Slovakia’s electronic road toll system, which was won by the SanToll-Ibertax consortium even though its bid, of over €716 million not including VAT, was the highest of the four submitted.

The contract was signed by the NDS and SkyToll, a company set up by the winning consortium, on January 13.

According to the ministry, the contract’s contents are not covered under the law on public access to information and there are limitations written into the contract that make publication of its details impossible.

Transport Minister Ľubomír Vážny told journalists in mid-February that a provision in the Commercial Code concerning business contracts prevents this contract from being published.

“The NDS is a company according to the Commercial Code and it agreed to certain contractual obligations with the winner of the tender about not publishing it,” Vážny told reporters.
“There is nothing veiled there; nothing that could not be published,” he added.

Vážny said that if the toll contract was published, SkyToll could pursue sanctions against the NDS.
Vážny's comments came just a month after he announced, following the signing of the contract, that it would be made public.

“It is publicly available, I repeat it, according to the law on public access to information,” Vážny told journalists on January 14, one day after the contract was signed.

Transport Ministry spokes-man, Ľubomír Karásek, told The Slovak Spectator that the minister had forgotten that his ministry was not the contracting party in this case. But he admitted that the ministry had helped to form a commission to evaluate the tenders and some of its nominees were part of the commission.

The contract includes a clause which has large financial penalties for anyone who discloses facts concerning the contract, Karásek added.

A lawyer from the civic association Citizen and Democracy, which initiated the passage of the Freedom of Information Act more than 8 years ago, Peter Wilfling, disagrees. The NDS is a 100 percent joint-stock company, founded by state, specifically by the Transport Ministry, Wilfling stressed. The state put capital into it when it was created.

“These are evidently public finances,” Wilfling told The Slovak Spectator. “It is nonsense to keep the contract secret.”

The Freedom of Information Act does not permit information on public finances not to be published because of a contractual agreement of silence by the contracting parties, Wilfling says.

He added that courts have repeatedly ruled in similar cases that any agreement on secrecy when handling public finances is not a barrier to the public accessing the information or a contract being published.

“If the contract includes an agreement about not publishing information, but the Freedom of Information Act requires its release, the contractual agreement is void and not binding,” Wilfling explained.

“If we accept that contracting parties can arbitrarily agree on making a contract secret, then any public control over handling public finances would be impossible. This would obviously be unconstitutional.”

Wilfling pointed out that in January 2006, when Vážny was an opposition MP for the Smer party, he had spoken out for and fought for publishing of contracts involving public finances.

“Now, Minister Vážny does exactly what he fought against when he was in opposition,” Wilfling noted.
“And this also implies that the minister is knowingly violating the law, which is grave.”

Karásek, however, called this reasoning - that the electronic toll collection contract is supported by public finances - demagogic.

“This is absolutely not true, because the NDS has generated, since its inception, its own profits,” Karásek told The Slovak Spectator. “It is a profit-making enterprise.”

Wilfling resolutely objected to this line of reasoning and expressed his concern that the ministry, as a central public body, was using such an argument.

“If this argument were to be accepted, then the formal transfer of public property into joint-stock companies would rule out any public control of how the state’s property is handled,” Wilfling said.

“It seems as if people at the ministry are not aware of the basic values of a democratic society, which include public control over handling of public finances.”

Emília Beblavá of the Transparency International Slovakia (TIS) watchdog group is also convinced that the contract details must be released, as it involves public money.

Beblavá told The Slovak Spectator that if the contract is not published in the near future, TIS would petition the courts to review the possibility of ordering its release.

Karásek noted that the ministry has called on both the NDS and the tender’s winner to publish the contract, if possible.

“So far, we have received no reply,” Karásek said.

The SkyToll consortium has referred back to the contract itself, according to the SITA newswire.
“Part of the contract with NDS is a clause about silence, thus we are not authorised to publish any details concerning this contract,” SITA quoted the consortium’s spokesperson, Eva Güttlerová.

The NDS concurred with Güttlerová's statement when asked about the contract by The Slovak Spectator.
Pavol Prokopovič, a former transport minister and currently an MP for the opposition SDKÚ, says that from the start the whole tender has evoked strong doubts about its genuineness and transparency.

“The tender’s winner was agreed upon beforehand and the whole process of the tender was just a cover and ‘theatre’ meant to confirm its eventual winner,” Prokopovič told The Slovak Spectator.

According to Prokopovič, this is demonstrated by the fact that well-known firms from sphere of business, which have had abundant experience in introducing and operating electronic toll systems across Europe, were excluded from the competition.

In addition, neither the transport ministry nor the NDS have until now provided full information on why these companies were excluded from the tender, according to Prokopovič.

It was claimed that the toll-monitoring devices mounted in vehicles by one of the excluded firms would not function properly, Prokopovič said. When representatives of that company responded that hundreds of thousands, maybe even millions, of such devices functioned normally across Europe, the result was a notification from the tender commission announcing that the company was being excluded from the competition, according to Prokopovič.

“And the choice of those persons who assessed the bids was also at least non-standard and baffling for such an important tender,” Prokopovič said.

One of the evaluators had had no previous experience with similar tenders. Another evaluator, an Austrian citizen, had a conflict of interests, as he is the owner of a patent with a company that is part of the winning consortium, said Prokopovič.

In addition, according to Prokopovič, the selected consortium has not had experience with similar tenders to such a large extent.

“The effective owners of Ibertax [part of the winning consortium] are unidentified persons or are residents of Cyprus,” Prokopovič told The Slovak Spectator.

Vážny himself admitted at a press conference on January 20 that he did not know who was behind Ibertax.

“We searched for information on the internet, but we could not achieve a reasonable conclusion,” the transport minister said, according to the Sme daily.

The satellite toll collection system for Slovakia is to be built by SkyToll, a company founded, after the tender by members of the winning consortium, SanToll–Ibertax.

The French highway company Sanef is a backer of SanToll. It is not known who has a controlling interest in Ibertax.

The system is to be operational by January 1, 2010. Tolls will be be collected from vehicles weighing over 3.5 tonnes operating on highways, motorways and some 1st class roads over a total length of more than 2,400 kilometres.

The contract was signed for 14 years with an option to extend it for five additional years.

The SanToll-Ibertax consortium submitted the highest bid - of €716.04 million, not including VAT - to build and operate the toll system. The lowest price tendered was from the Slovak-Italian consortium Slovakpass, at €530.16 million.

A Slovak-Swiss consortium, ToSy, proposed a price of €547.28 million and a consortium led by an Austrian company, Kapsch TrafficCom, bid €629.71 million. But all three consortiums with bids lower than SanToll–Ibertax were excluded from the tender it was completed.

C and courts looking at tender

The conditions for the tender have been under examination by the European Commission (EC) for the several months. One of the excluded consortiums, Slovakpass filed an objection with the EC because it did not accept the reasons for its exclusion from the tender.

It stated that all three consortiums had been illegally excluded from the tender.

The same three consortiums also filed a motion for review of the tender with the Bratislava Regional Court in July 2008, asserting that their exclusion from the tender was not in compliance with the law. The court has said that their motion is being analysed.