IN ONE of the worst traffic accidents in Slovakia’s history a collision between a bus and a train near the village of Polomka in central Slovakia claimed 12 lives. A passenger train with two carriages crashed into a bus which was carrying 37 skiers from Bánovce nad Bebravou to the ski resort Bučník at about 09:00 on Saturday, February 21. 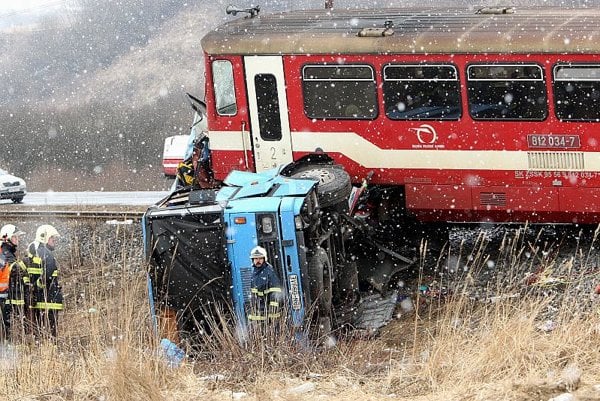 IN ONE of the worst traffic accidents in Slovakia’s history a collision between a bus and a train near the village of Polomka in central Slovakia claimed 12 lives. A passenger train with two carriages crashed into a bus which was carrying 37 skiers from Bánovce nad Bebravou to the ski resort Bučník at about 09:00 on Saturday, February 21.

The bus driver, who is also the owner of the transport company, survived the crash with slight injuries and was released from hospital two days after the accident. It was not a regularly scheduled bus route, but a trip by friends organised by the bus driver.

One of the firemen who pulled survivors and dead bodies from the bus crumpled under the derailed train told the media that nobody seated near the spot where the train made impact with the bus could have survived.

“The bus opened like a tin can,” the fireman was quoted as saying by the ČTK newswire.

The accident happened at a railway crossing which was not fitted with an electronic warning system. The driver apparently failed to spot the nearing train. After the collision, the train pushed the bus along the railway tracks for about twenty metres. Some of the victims remained trapped underneath the wreckage.

Three helicopters and nine ambulances transported the injured. They were taken to hospitals in Banská Bystrica and Brezno, wrote the SITA newswire. Eight passengers in the bus were seriously injured and 13 had lesser injuries. The youngest victim was 34, the oldest 62; the victims included three married couples.

The Czech daily Právo quoted the words of the Slovak passenger transportation company Železničná Spoločnosť Slovensko (ŽSSK) spokesman Miloš Čikovský that neither the train engineer nor passengers on the train were seriously injured; only two of them had minor graze injuries.

“The engineer saw the bus coming, he blew the signal and applied the emergency brake,” Čikovský told the daily Právo. “However, he could not have prevented the collision.”

Trains are allowed to operate at up to 70 kilometres per hour at the site of accident.

The railway crossing is protected neither by automatic gates nor by lights. Martina Pavliková, a spokeswoman for ŽSR, the railway network operator that owns the tracks, told The Slovak Spectator that this is because of good local visibility and the low frequency of trains passing through the crossing.

However, in winter, there are many more tourist buses and cars travelling to the nearby ski resort, the Sme daily wrote.

Fico, Kaliňák, and Vážny said they thought the accident was unambiguously caused by the bus driver. Vážny was quoted by the daily Sme to have said that “this is probability bordering almost on certainty”.

The bus driver could face four to 10 years in prison if found guilty of the crime of public threat due to negligence.

Kaliňák’s also expressed the opinion that the driver of the bus had caused the accident. He simply was not supposed to stand at the crossing, Kaliňák told the news television channel TA3.

Kaliňák also claimed that the bus driver had a good view of the stretch of rails from which the train was coming. He estimated that after arriving at the crossing, the driver could see on the left “continuous rails, straight for 300 metres, and then they disappear behind the bend, so the view is evidently there, and sufficient".

However, Interior Ministry Erik Tomáš told The Slovak Spectator that Kaliňák did not prejudge the result of the investigation and was only describing what he thought the traffic situation was shortly before the crash. The actual cause of the accident will be investigated, Tomáš added.

“The bus had no reason to be on the rails at the time the train was approaching,” Tomáš said. “It should have given way [to the train].”

Tomáš added that a team was assembled to investigate the cause of the crash, but that until it comes to some conclusions, the ministry would not speak further about the course of the investigation. Tomáš told The Slovak Spectator that, in his opinion, the investigation could be concluded within two weeks.

The bus driver had braked at the railway crossing, according to the Sme daily, as the road at the crossing is in a bad technical condition. At the moment when the train was coming, he was shifting gears but the bus failed to clear the tracks, according to Sme.

Slovak daily newspapers reported that five years ago a passenger car collided with a train at the same site, killing two people. The municipality of Polomka has repeatedly asked the railway company in recent years to mark the crossing with at least signal lights but their requests were not acted upon. The mayor of Polomka, Ján Lihan, confirmed this to Sme, as did as former mayor František Ďurčenka.

Pavliková told The Slovak Spectator that this is a standard crossing, of which there are 1249 of this type in Slovakia. Although from the point of view of the railway network operator’s parameters it is not necessary to increase the safety at the crossing in Polomka, the company’s management will now address this issue after the tragedy, Pavliková said.

She added that increasing the safety protection of one crossing by one degree – that is, by installing signal lights or gates – costs €265,000 (Sk8 million). To secure all ‘unprotected’ crossings, the railways would have to invest €331 million (Sk 9.9 billion).

Former Mayor Ďurčenka says that the situation at the railway crossing has been dangerous for a long time. Mayor Lihan again asked Transport Minister Ľubomír Vážny, while he was at the crash site, to at least secure signal lights.

“We can just ask and ask again,” Lihan said.

Vážny reacted by saying that the ministry concurrently evaluated 1,249 unprotected railway crossings. Later, when asked by journalists if he would resign, Vážny responded that he saw no reason to do so because of the accident.

“It is really an unbelievably vain gesture to draw political responsibility for such a tragic event,” Vážny told journalists, according to the daily Sme.

He referred to the fact that his resignation would not return the victims to life.

“I simply cannot bear responsibility for any accidents on the roads, as tragic as they might be,” Vážny added.

“Maybe he was busy with the crossing and the bumpiness of the terrain, which drew his attention away from checking whether a train was coming,” Bazovský said for The Slovak Spectator.

According to Bazovský, the railway is intersected by a specially-built road which is used more frequently during the skiing season, as it leads to a ski slope.

“Reducing the crossing speed of trains operating along this route in winter months could be considered,” Bazovský said.

However, he added that experts who deal with railway transport should analyse whether such a lower speed limit makes sense.

To honour the memory of victims, Prime Minister Robert Fico proclaimed a national day of mourning in Slovakia on February 22.