FROM early September restaurants in Slovakia should take on a different look, as the familiar smoky haze which currently pervades many of them begins to lift – at least partially. Under new rules approved by parliament, any restaurant that wishes to allow diners to smoke must confine them to an area at the back of the establishment separated by a wall from an area devoted to non-smoking customers. 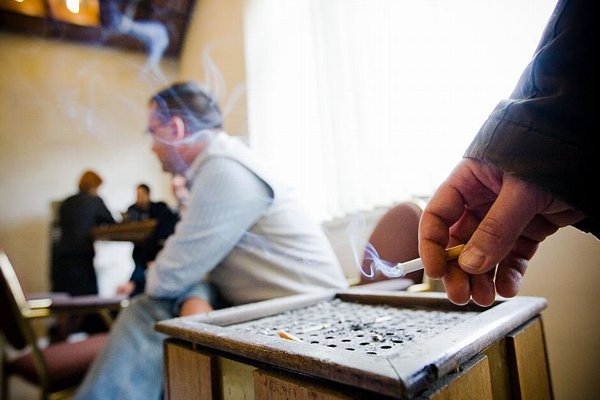 FROM early September restaurants in Slovakia should take on a different look, as the familiar smoky haze which currently pervades many of them begins to lift – at least partially. Under new rules approved by parliament, any restaurant that wishes to allow diners to smoke must confine them to an area at the back of the establishment separated by a wall from an area devoted to non-smoking customers.

Furthermore, the non-smoking area will have to be at least one half of the whole area of the restaurant, and must be located near the entrance. The new rules will apply only to establishments which serve food.

The law setting the new rules was passed by parliament in mid February as an amendment to the Act on the Protection of Non-smokers. Providing it is signed by the president, its will become effective as of April 1, except for the provision requiring the construction of permanent walls to separate smoking and non-smoking areas, which must be completed by September.

MPs from the largest opposition party, the Slovak Democratic and Christian Union (SDKÚ), unsuccessfully pushed for a complete ban on smoking in restaurants, cafés and pubs. An hoteliers association as well as the World Health Organization (WHO) also criticised the amendment, arguing that smoking should be completely forbidden in public spaces.

Health Minister Richard Raši told journalists, as the amendment was being passed, that non-smokers should not be subjected to smoke while eating.

The existing law already requires that smokers and non-smokers in restaurants be separated, but does not specify how. Raši stressed that under the new law, the dividing wall to separate smoking and non-smoking areas must not be provisional, but should prevent smoke from getting from one room into another.

“I will be satisfied when a total ban on smoking is passed,” Raši told the media.

Smoking will be totally prohibited in official buildings, theatres, exhibition halls, department stores, cinemas, museums, and galleries. Up to now, smoking has been banned only in the publicly accessible parts of such buildings.

Under the new law, the entire grounds of hospital and medical complexes will be made non-smoking, not just the buildings’ interiors. The only exceptions will be for reserved rooms or smoking spaces in mental departments since, according to those who drafted the amendment, such departments are often used by smokers.

If people smoke at bus stops or on railway platforms they will be subject to police fines.

Selling tobacco products to people aged under 18 will attract a fine of between €331 and €3,319. The amendment also bans the sale of cigarettes in university cafeterias and snack bars. Cigarette vending machines will also be outlawed.

Smoking will be allowed in cafés, wine bars, pubs and bars where only drinks are served, and separation of smokers and non-smokers will not be required.

Cigarettes will continue to be on sale near check-outs: MPs did not approve a clause which would have confined cigarette sales to a separate counter near the exit of a shop.

The amendment also bans smoking on trains. A spokesman for the ŽSSK state railway company, Miloš Čikovský, told the Pravda daily that smokers’ carriages had in any case been gradually abolished since 2005.

“Since March 2007, all domestic trains have been non-smoking,” Čikovský told Pravda. “If a conductor catches a passenger smoking in the toilet or in the corridor he will fine him or her €50.”
In the parliamentary debate on the amendment, Milan Urbáni, an MP for the Movement for a Democratic Slovakia (HZDS), described as discriminatory the signs on cigarette packets which warn that smoking can be damaging to health. If such warnings are placed on cigarettes they should also appear on foods which are potentially detrimental to health, Urbáni told parliament.

“Let us write them also on bacon – it can kill, too,” Urbáni argued.

Urbáni said that if anti-smoking campaigners were consistent, smoking should be totally banned and everyone should bear the consequences.

He called the law on protection of non-smokers ‘double-dealing’, since Slovakia also pays farmers subsidies to grow tobacco. Urbáni also calculated the possible effect on revenues from a loss of levies on tobacco products.

“If smoking is not allowed, where will we get the €517.82 million (Sk15.6 billion) that won’t be available?” Urbáni was quoted as saying by the TASR newswire. “It will reduce tax income. Those who want to discriminate against smokers in this way – let them tell us where they will find this money.”

“The level of protection for non-smokers is certainly less than we had hoped for,” Rosová told public broadcaster Slovak Television after the amendment had been passed.

Jozef Bendžala, president of the Association of Hotels and Restaurants, told The Slovak Spectator that although the law did not ban smoking in hotels, hotelkeepers backed a total ban on smoking. He said that on this issue, which affects human health, they could not be guided by whether a total ban would hurt sales or not. Moreover, he added, the trend abroad was the same.

Bendžala told the The Slovak Spectator that he himself supported a ban on smoking. Most hotels, he predicted, will not build partition walls in their existing dining rooms.

“I think that the president should not sign such a law,” Bendžala said. He added that it would be wrong to build partition walls in furnished and well-established restaurants.

“And it would not actually help, as the smoke will [still] penetrate through,” he told The Slovak Spectator. Bendžala, who is also the director of the Patria Hotel in High Tatras, said that in his hotel there would be a total ban and smoking would only be allowed outside. In the winter months, one room would be reserved as a smoking area inside the hotel.

Zuzana Čižmáriková, a spokesperson for the Health Ministry, defended the amendment. She told The Slovak Spectator that according to polls, people are most frequently annoyed by tobacco smoke in restaurants.

“This was the reason that we wanted to improve conditions for the protection of health,”

Čižmáriková said. She added that in Slovakia, 62 percent of the adult population does not smoke, but are still subject to the effects of passive smoking in many public places, which causes many illnesses.

About 11,000 people die each year in Slovakia, the most causes of death being respiratory and cardiovascular diseases, and cancer, according to Čižmáriková.

Darina Sedláková, from the WHO in Slovakia, told The Slovak Spectator that the WHO welcomed the new provisions further restricting the availability of tobacco products.

“However, the most keenly awaited change – a total ban on smoking in hospitality industry facilities – was not passed, although a majority of the population in various public surveys have expressed support for such a change,” Sedláková told The Slovak Spectator.

The problem, according to Sedláková, is that the new amendment introduces mandatory separation of ‘facilities serving meals’ by a permanent wall between smoking and non-smoking areas, but leaves ‘facilities serving only drinks’ to decide themselves whether they will be smoking or non-smoking – and does not regulate the smoking and non-smoking areas. This is a step backwards, even when compared to the previous wording of the act, she said.

“Moreover, there is no clear definition what constitutes a ‘meal’, Sedláková said. “Pubs immediately raised the question of whether peanuts or crisps should be considered “meals”, and the answer given was ‘no’.

“So, you may well imagine that especially young people who do not visit restaurants so often, but do visit pubs and bars will be exposed to smoking just as they were before - unless the owners decide to make their business non-smoking. I personally doubt whether too many will.”

Sedláková added that a non-smoker suffers from smoking in a similar way to smokers. Tobacco smoke contains about four thousand chemicals, of which 50 are classified as carcinogens, she explained.
“Inhaling the tobacco smoke – second-hand or passive smoking - damages your body just as it does in the smoker’s case”, said Sedláková. “Of course, much depends on the volume and frequency of exposure. “

Tobacco has not yet been classified as an illegal drug, which is why it cannot be totally prohibited, Sedláková stressed. “There are too many smokers and smoking is still socially tolerated by many people. They may not like smoking, but they are of the opinion that it is everyone’s business.

However, smoking is at the same time classified as a disease – i.e. tobacco addiction – and physicians say that it should be treated accordingly, Sedláková said.