THE CONTRACT recently awarded to supply and operate Slovakia's electronic highway toll system must be published, Prime Minister Robert Fico has said. He made the comment while speaking to public broadcaster Slovak Radio (SRo) a few weeks after several non-governmental organisations, the parliamentary opposition and various media had called for its publication. 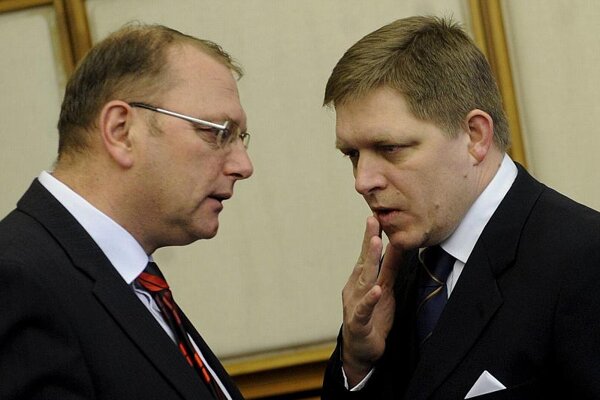 THE CONTRACT recently awarded to supply and operate Slovakia's electronic highway toll system must be published, Prime Minister Robert Fico has said. He made the comment while speaking to public broadcaster Slovak Radio (SRo) a few weeks after several non-governmental organisations, the parliamentary opposition and various media had called for its publication.

The contract is between the National Highway Company (NDS) and SkyToll, a company created and owned by the SanToll-Ibertax consortium, which emerged the winner of a long and troubled tender. The Transport Ministry is the sole owner of the NDS. Both the Transport Ministry and the NDS have said the contract could not be released because it contains a secrecy clause.

The contract has been the casue of controversy partly because SanToll-Ibertax's winning bid, of over €716 million excluding VAT, was the highest of the four submitted.

Fico called on the transport ministry, the NDS, and the winning consortium to remove any legal obstacles preventing publication of the contract.

“They should stop fooling around, to put it frankly, and show the contract normally, as this is a big tender and I don’t see what they are afraid of,” Fico said to SRo. “If they stand firmly behind the contract and behind the tender – the way it was competed – they should show the contract, give it to public. I don’t understand why citizens should not see this contract. I have absolutely nothing against it”.

“About the question of publishing the contract on the toll tender, turn to its winner,” Fico told journalists on February 13.

Ľubomír Karásek, spokesman for the transport ministry, told The Slovak Spectator that the ministry had repeatedly expressed its willingness to publish the contract. The problem, according to him, is that the NDS is not using just public money to construct the highway toll system and therefore the Freedom of Information Act does not apply to publication of the contract.

“The contract’s components include direct descriptions of the technologies and know-how of the winning company,” Karásek said, “and no one dares to publish this information.”

“In spite of the current efforts [to release the contract], the contract includes a clause with quite a high sanction for its publication,” Karásek stressed.

NDS argues that the contract cannot be published due to the trade secrets that are in it.

Marcel Jánošík, the NDS spokesman, told The Slovak Spectator that following Fico’s statement, the NDS will ask SkyToll to agree to publication of the contract. SkyToll was formed by SanToll and Ibertax after their consortium was awarded the tender.

“Currently, the process of approving this matter with SkyToll’s shareholders is underway,” Jánošík said.

Eva Güttlerová, the spokesperson for SkyToll, confirmed to The Slovak Spectator that the NDS has asked for publication of the tender.

“SkyToll is working on all formal steps necessary for the contract to be published,” Güttlerová said.

She added that in the near future SkyToll will very likely give such approval. However this had not happened before The Slovak Spectator went to press.

SkyToll is not considering publishing the tender offer that was made by SanToll and Ibertax.

“The shareholders must express themselves about the tender itself, as this bid was not actually made by SkyToll,” Güttlerová explained. “At that time, SkyToll did not exist.”

Opposition MPs go to the NDS

On March 3, MPs from the parliamentary committee for economic policy went to the NDS to examine and study the documents concerning the tender procurement for the electronic toll collection system.

“Unfortunately, we saw neither the bid of the winning applicant, nor the contract,” Stanislav Janiš, an MP for the opposition Slovak Democratic and Christian Union (SDKÚ), told The Slovak Spectator.

He added that the winning bid was €199.16 million (Sk6 billion) higher than the other proposals. The other companies with lower bids were excluded before the end of the tender but the MPs did not learn why.

“It is sad that the request for the contract to be confidential, or non-public, was not made by the tender winner, but by the NDS,” Janiš said.

Janiš said that the head of the NDS Igor Choma confirmed this fact during the visit.

According to Janiš, contrary to the Freedom of Information Act, the contract was made confidential even though the NDS is a public company.

Janiš further added that in his opinion the NDS could not have permitted the most expensive bid to win in the tender without “the political blessing of Prime Minister Fico.”

“Since the very beginning, both the Prime Minister and the transport minister covered the back of the NDS,” Janiš opined. “So now, it is merely a populist gesture of the prime minister when he says the contract must be published.”

According to Janiš, it is crucial to publish not only the contract but also the bid documents of the victorious consortium so that these two documents can be compared.

“Until they publish both the bid and the contract, the suspicion will persist that the bid is not identical with the contract,” Janiš said.

He added that so far he had no reason not to believe that the winning consortium was favoured in the tender.

It will be interesting to see, if the ministry and the NDS do not honour the prime minister’s request, whether Fico will be able to force a cabinet resolution to order release of the contract, said Peter Wilfling, a lawyer with the NGO Citizen and Democracy. His NGO initiated the legislative campaign to pass the Freedom of Information Act and co-authored it. Wilfling opined that it is clear that the NDS must be treated as a government institution and that it must make the contract available to the public.

“It is strange that Prime Minister Fico took such a long time before expressing his view on the NDS having classified the contract as confidential,” Wilfling added for The Slovak Spectator.