THE SLOVAK government has strengthened the influence of the state in the economy, and at the same time there has been a rise in corruption and party cronyism, according to the annual Global Report on the State of Society published by the non-governmental think-tank the Institute for Public Affairs (IVO). Its most recent edition was published this month. 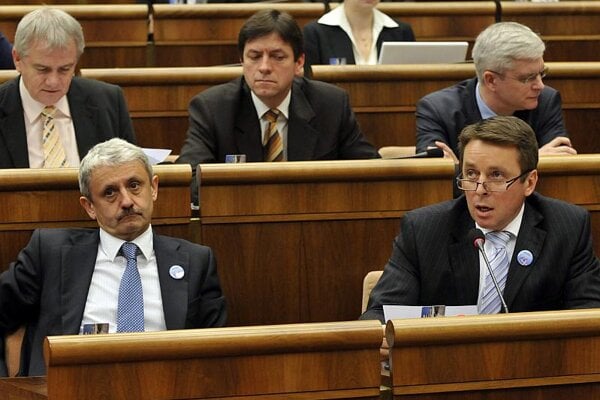 THE SLOVAK government has strengthened the influence of the state in the economy, and at the same time there has been a rise in corruption and party cronyism, according to the annual Global Report on the State of Society published by the non-governmental think-tank the Institute for Public Affairs (IVO). Its most recent edition was published this month.

Although voters said, when asked in opinion polls carried out for the report, that they considered the rise in corruption to be among the four biggest problems facing Slovakia, and although they say they are well aware of it, this has not been reflected in the popularity of the ruling coalition, IVO’s president, Grigorij Mesežnikov, told The Slovak Spectator.

The current government, led by Prime Minister Robert Fico, has not put last year’s economic growth to sufficient use in terms of national development, the IVO report states. Instead, it frequently used the increased public revenues to gain popularity among the electorate.

However, Mesežnikov said the biggest problem concerns the weakening of democracy in Slovakia.
“The dominant government forces rule in a way that is incompatible with the principle of modern liberal democracy,” Mesežnikov told The Slovak Spectator.

Fico has not reacted to the findings of the Global Report.

“I will not comment on Mr. Mesežnikov, [who is an] advisor, friend of the opposition,” Fico told the media.

Fico’s spokesperson, Silvia Glendová, in comments to the Sme daily, dismissed the IVO report as “absurd allegations which stem solely from the individual feelings of the fan-club of [former prime minister] Mikuláš Dzurinda and [former finance minister] Ivan Mikloš.”

Mesežnikov described statements claiming he is an advisor, personal friend or representative of the opposition as ‘lies’. He said the Global Report was based on hard data which could not be denied.

“The statements by Fico and Glendová show that when it comes to reasoned argument, they are in a deficit situation,” Mesežnikov explained. “They don’t have enough arguments to factually oppose the findings.”

The tyranny of the majority

Mesežnikov said that parliament was openly subjected to the tyranny of the majority. According to the report, for instance, parliament approved 143 laws and amendments last year.

But as many as 69 bills and bill amendments were rejected; these were mainly measures proposed by opposition MPs.

“The rejected measures were practical legislative norms, which had no political connotations,” Mesežnikov said. “But they were rejected because they were proposed by opposition MPs.”

Mesežnikov also referred to attempts to involve parliament in disputes over the membership of the Constitutional Court.

“Proposals were passed which concerned the composition of the Constitutional Court – which is not within the authority of parliament,” Mesežnikov said.

Slota and the double standard

According to Mesežnikov, double standards were applied when prosecution and investigative bodies handled different groups of citizens. He mentioned Ján Slota, chairman of the Slovak National Party (SNS), who was not prosecuted for statements he made during the past year.

“And yet, there was reasonable suspicion that he committed the crime of spreading racial hatred,” Mesežnikov said.

In eastern Slovakia on October 5 last year, Slota said that Slovaks would not bow before “this huge pressure exerted upon us by our neighbours from Budapest, where there is the lady with dishevelled hair, the poor woman.”

By the ‘poor woman’, Slota was referring to Hungarian Foreign Minister Kinga Göncz.

Slota then spoke about Hungarians in the mediaeval period, calling them ‘Mongolians’.

“We have been here for ages, and the Mongolians came far, far later, after us. They erect these turuls, these Hungarian parrots.”

Turuls are a mythical bird sometimes used as a Hungarian national symbol. In Slota’s case, according to Mesežnikov, the prosecutor’s office did not proceed the way it would in the case of common citizens.

“This all proves that the ruling coalition has a problem with the spirit of modern liberalism, and with the principles of liberal democracy,” Mesežnikov stressed.

The confrontation not just with the opposition, but also with the media has deepened, according to Mesežnikov.

On the other hand, representatives of the ruling coalition managed, according to the report, to maintain the image of ruling socially and carefully. People had a positive perception of the cancellation of fees for visiting doctors, Christmas pension bonuses and benefits for children.
Almost 48 percent of people polled for the report said they trusted the government, while 50 percent said they did not.

Last year, the ruling coalition benefited from the growth of the Slovak economy, despite the growth not being the result of its actions or policies, according to Oľga Gyárfášová, a co-author of the Summary Report.

“It has strengthened this favourable factor by not thinking about the future, but spending money in a populist way here and now on very deliberate and clearly visible benefits for specifically targeted groups,” Gyárfášová told The Slovak Spectator.

For example, it introduced the so-called thirteenth pension payment instead of making structural changes or investing in long-standing priorities - for instance, education or infrastructure - Gyárfášová added.

Gyárfášová said it was notable that as late as the end of last year the Slovak public did not even mention the economic crisis when polled.

It could have been connected, according to Gyárfášová, to the poor economic education of Slovaks, but also to the fact that people blindly believe everything politicians tell them, especially Prime Minister Fico.

Another finding of the Summary Report was that there is a shockingly wide gap in opinions between Slovaks and Hungarians.

“When it comes to opinions, there is much tension between the Slovak majority and the Hungarian minority,” Gyárfášová said, adding: “In both environments, the image of an enemy has been created, and responsibility for the situation has been placed on the ‘other side’.”

Mesežnikov also pointed out that the Summary Report had found that the Slovak judicial system has been weakened by corruption. Corruption has spread to other spheres too. Emília Beblavá, a co-author of the Summary Report and president of Transparency International Slovakia, a watchdog organisation which focuses on the level of corruption in Slovakia, told The Slovak Spectator that nepotism and party cronyism existed.

“The government has basically not presented its idea of a fight against corruption yet,” Beblavá said. “There is no official document binding the ruling coalition, to which we could hold them responsible.”

According to Beblavá, no reforms have yet been made that would curb corruption by the ruling coalition.

As one example of party cronyism she pointed to subsidies allotted by the central government explicitly to local governments which are led by representatives of the ruling coalition parties.

“It is merely a political question, whether Fico will fight this vulgarity and show citizens that he is honest and true,” Beblavá added. “But I don’t see it as being realistic given the present composition of the ruling coalition.”

However, if Fico began structural changes to limit the space for corrupt practice, the present ruling coalition could still do much to fight corruption before the end of its present term, Beblavá stressed.