Re-enactment of WWII battle for the Dargov Pass

ON THE weekend of May 8-10 when Europe celebrated the victory over fascism in WWII, members of the Cassovia Corp and Retro Air civic associations from Košice organised a re-enactment of the battle to free Dargov Pass in eastern Slovakia from the German army. 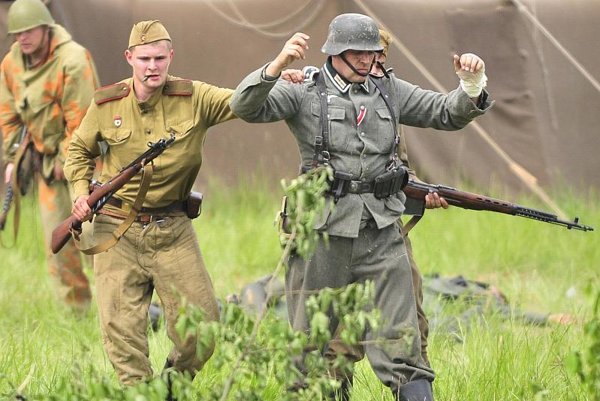 ON THE weekend of May 8-10 when Europe celebrated the victory over fascism in WWII, members of the Cassovia Corp and Retro Air civic associations from Košice organised a re-enactment of the battle to free Dargov Pass in eastern Slovakia from the German army.

“The fight for the Dargov Pass took place at the end of 1944 and in January 1945. We have now prepared this re-enactment twice for the anniversary of the end of WWII so that as many people as possible can see it,” Miroslav Virág of the Cassovia Corp told the TASR newswire. The audience could witness what the lives of the Russian and German soldiers were like in the historically-accurate encampments and they could see the military equipment and armaments used by both sides during the battle.

“We demonstrated the battle tactics, especially the defensive tactics of the German army which by the end of 1944 consisted of a strategy of retreat on all fronts. Spectators could see how this defence could be bypassed,” Virág explained. Virág said it has been very difficult to unearth precise information about this battle. “This part of history is quite poorly researched. For example, you can’t find out from historical documents exactly how many people died in this battle but from available sources we estimate 20,000 to 25,000 fatalities, including civilians,” said Virág.

Organisers of the event used military equipment from private collections as well as from the Slovak Military Historical Institute.

About 160 people participated in the re-enactment with 28 people operating the vehicles. A Yak-52 aeroplane, camouflaged in the colours of the Russian air force, was also used.

"Last year, we re-enacted the first part under the feet of the Slanské hills, near the village of Bačkov. This year’s event was the second part and for next January we are preparing the re-enactment of the direct battle for control of the Dargov Pass – which took part in January 1945.
"The last part, the capture of the German troops near Klečenovo, will be re-enacted in 2011,” Virág told the SITA newswire.

Military history clubs from the Czech Republic, Poland, Hungary and Slovakia took part in the event and an honorary guest was Nikolai Nikolaievich Kozlovsky, a member of the Russian army during the war. The WWII Carpathians-Dukla campaign opened Slovakia for the entry of the Red Army and the defeat of the German army at Dargov Pass, where they had defended a second battle line, opened the way for the Red Army to advance towards Košice.