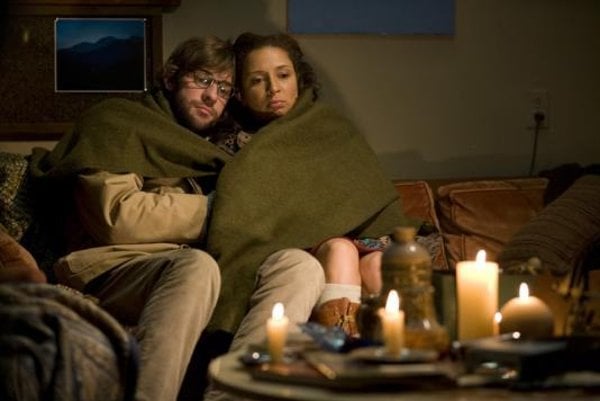 TO PARAPHRASE Chekhov’s adage of storytelling: a gun introduced in the first act must be fired by the end of the third. A similar rule seems to apply in the land of cinematic whimsy, where a baby conceived during the narrative must be brought squawking to life by the time the credits roll. This basic premise of American indie – favoured by Knocked Up, Juno, Waitress, among others – permits some heaving, sweating close-ups of the leading lady in labour and a bucket-load of maternity-ward japery from the dad. But most importantly, a birth is also a convenient bookend: the delivery of a new life is as emphatic a signal of journey’s conclusion as the fatal shooting of that gun.

The lack of a birth scene in Away We Go, directed by Sam Mendes from a script by the husband/wife team of Dave Eggers and Vendela Vida, is only one way in which this modest ditty upends our expectations. The film’s opening scene shows Burt (John Krasinski) determining that his partner Verona (Maya Rudolph) is pregnant, and the film’s timeline runs almost completely through her cycle. But we never do get to see the infant. The narrative halts short of the dash to the hospital, and thus a cliché is swerved.

This is doubly remarkable because Away We Go is also a road movie, wending gently towards such a natural, if breathless, end. But from the outset, the film is less concerned with the battle to bring the child into the world than with the parents’ belated quest to understand the type of place it is entering. They seek to test their values and preoccupations as well as overcome some hang-ups and modest anxieties. The film follows Burt and Verona’s search for reassurance that their unaffected common sense should not feel as uncommon as it does.

“We’re 34 … and we don’t even have this basic stuff figured out,” says Verona, adding by way of evidence: “We have a cardboard window.” But their free-spirited approach also has a recognisable brighter side: “We’re completely untethered, Burt. This is a dream scenario.”

After learning that Burt’s parents (read: potential babysitters) intend to emigrate to Belgium and miss the first two years of their grandchild’s life, Burt and Verona leave their ramshackle base in Colorado and head out on an episodic tour of friends and relatives across North America to decide where next to call home. (Burt is some kind of insurance salesman, and can continue to work on the road.)

Their associates are a disparate bunch of 30 to 50-somethings and we veer, sometimes uneasily, from the fringes of credibility to the very middle of Middle America. On one trip, we visit caricature New Age hippies railing against the evils of push-chairs, but then we are charmed by sensitive foster parents unable to deliver a child of their own.

Burt and Verona might be touched and moved by all the right prompts, but they are also not averse to issuing judgment on others’ failings. Some audiences will adore their simple honesty, but others will find them insufferably smug. “No one is as in love as us,” they tentatively agree, seeming surprised. But the assertion is at least as much in self-satisfaction as it is in self-doubt.

These are rare leads around which to build a feature film, and there are characters more deserving of our attention and sympathy on every street in the world. Their “problems” include the fact that they have none, and they even fear the baby’s pulse may be too mellow because of the lack of conflict in its parents.

But although we may not instantly love our heroes in Away We Go, as perhaps we are meant to, we do believe in their love for one another, which is a grand thing to observe. It is also a feat of Eggers’ and Vida’s naturalistic writing and Mendes’ unobtrusive direction. Krasinski and Rudolph achieve a kind of modernist, bohemian chemistry, founded on comfort rather than sparking with lust.

We could have done without the winsome soundtrack to make such an obvious virtue of this understatement. But ditching that too might have been a diversion too far from a well-trodden norm.