BACK in 1998 the centre-right parties created a five-member coalition to put an end to the rule of Prime Minister Vladimír Mečiar who, according to critics, was bringing Slovakia to the verge of international isolation and posing serious threats to the development of the country’s emerging democracy. After more than a decade, and two terms governing the country, the centre-right parties - now in opposition - met again to discuss possible cooperation for the 2010 elections in order to unseat the ruling coalition led by Prime Minister Robert Fico and his Smer party. 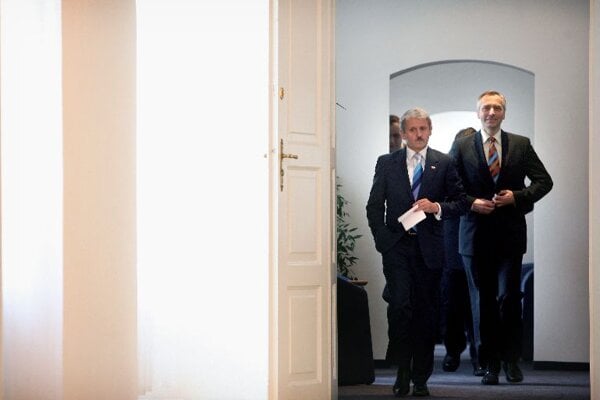 The leaders of the two largest opposition parties, Mikuláš Dzurinda of the SDKÚ (left) and Ján Figeľ of the KDH, arriving at the meeting. (Source: SITA)
Font size:A-|A+  Comments disabled

BACK in 1998 the centre-right parties created a five-member coalition to put an end to the rule of Prime Minister Vladimír Mečiar who, according to critics, was bringing Slovakia to the verge of international isolation and posing serious threats to the development of the country’s emerging democracy. After more than a decade, and two terms governing the country, the centre-right parties - now in opposition - met again to discuss possible cooperation for the 2010 elections in order to unseat the ruling coalition led by Prime Minister Robert Fico and his Smer party.

Mikuláš Dzurinda, the head of the largest parliamentary opposition party, the Slovak Democratic and Christian Union (SDKÚ), invited the leaders of five other parliamentary and non-parliamentary parties to a meeting on December 16. The primary purpose of the meeting was to extend appreciation to those parties for helping their joint candidate, the SDKÚ's Pavol Frešo, in his successful election as president of the Bratislava Region. Five of the invited parties had endorsed Frešo and it was the only region in Slovakia where a centre-right candidate was elected.

Apart from the SDKÚ, representatives of the Christian Democratic Movement (KDH), the Hungarian Coalition Party (SMK), Most-Híd, Freedom and Solidarity (SaS) and the Civic Conservative Party (OKS) attended the meeting. Despite the fact that several of these parties have well-known bilateral conflicts, they all agreed that they would start cooperating more closely in January 2010.

Recent polls show that some form of cooperation will be needed if the opposition is to have any chance of defeating Smer in the national elections. According to a December 2009 poll by the Focus agency, Smer would claim almost 38 percent of the votes, while the SDKÚ would have the support of only 11.5 percent of the voters, followed by the KDH with 11 percent. Most-Híd and the SMK would both garner between 5.5 and 6 percent of the vote and SaS would just make it into parliament with slightly more than 5 percent, the threshold necessary to send deputies to parliament.

The common aim of the opposition parties is to offer an alternative to the current ruling coalition for the June 2010 national elections.

“Where there is a will, there is a way,” the SITA newswire quoted Dzurinda as saying, repeating his motto from the 2002 election campaign while he added that there is no room and time for personal conflicts or partisan egoism. He said cooperation between the parties should lie in three main spheres.

“We need to unify our party programmes, clearly distinguish ourselves from the government, and give thought to arranging our relations in such a manner that the votes of democratically-minded people [in the 2010 parliamentary election] are not wasted,” the TASR newswire quoted Dzurinda as saying.

Political analyst Miroslav Kusý did not view the meeting as a big success since the rightist political leaders only agreed that they will seek to have an agreement in the future.

“So it’s more than nothing, but less than some functional cooperation that could serve as an alternative to the current government,” Kusý told The Slovak Spectator. According to Kusý, the purpose of the meeting was primarily for Dzurinda to see whether he is acceptable as a joint opposition leader for the other parties, and it turned out that he is not.

While Kusý does not believe that cooperation between the centre-right parties can significantly influence the result of the parliamentary elections, as he believes that it is too late for the parties to now wake up and try to put together the pieces that fell apart after they descended into opposition after the 2006 elections, political analyst Grigorij Mesežnikov is more optimistic. According to him, the preferences for the individual parties are not high, but if they are added together they can pose a serious challenge for Prime Minister Fico’s governing coalition.

The December 16 meeting did not bring any real details about future cooperation among the Slovak centre-right parties and, according to observers as well as some party leaders, any possibility that a big centre-right bloc would be created by the parties ahead of the 2010 elections can be ruled out.

A similar grouping of parties, the Slovak Democratic Coalition (SDK) emerged in 1997 in an attempt to defeat Mečiar’s Movement for a Democratic Slovakia (HZDS), but in response the HZDS-led government changed the election law so that such a temporary coalition could not be on the ballot for the election. To comply with the changed rules, the SDK was registered as a political party with exclusive membership of only the 150 people who appeared on the list of candidates. But Dzurinda, originally from KDH, did not fulfil his promise that the candidates would return to their original parties and remained as the leader of SDK, along with several other influential politicians. At that time, the KDH saw it as a betrayal. The SDKÚ was then founded in 2000 by political leaders, led by Dzurinda, who had not returned to their original parties.

Today, the KDH does not count on a similar option of allying its forces with the SDKÚ – and neither does the SMK, according to its deputy chairman, Gyula Bárdos, who attended the meeting instead of party chair Pál Csáky, who was visiting Budapest on December 16.

“There is the opinion within the KDH, shaped by experience, that with our own forces we are able to create and bring more potential to negotiations than through a merger,” the TASR newswire quoted KDH chairman Ján Figeľ as saying.

“I’m sure that nobody is afraid of me exerting some political pressure or playing political games that might lead to the formation of something resembling the SDK... all I care about is responsibility,” said Dzurinda, as quoted by TASR.

While the KDH and SMK keep saying they prefer to go into the elections on their own, the three other parties would have no problem signing a pre-election written commitment, the SITA newswire reported.

Mesežnikov said he was not surprised by the stance of the KDH and SMK since these parties have not been threatened by falling preferences. In the November 2009 survey the KDH still had over 10 percent. On the other hand, for the smaller parties, cooperation with stronger centre-right parties is a way to make it to parliament. According to Mesežnikov, the SDK was created in completely different conditions in 1997.

“It’s not about renewal of the SDK now, but I can imagine the cooperation of the SDKÚ and Most-Híd or with Most-Híd and SaS – it doesn’t necessarily have to be a pre-election coalition, but it can be, for instance, a joint candidate list under the heading of one of the parties,” he told The Slovak Spectator. “But it’s unrealistic to expect that a wide right-centre bloc could be established and I think that this is not even the question.”

According to Mesežnikov defining the position of the parties after the elections is important before the elections, especially defining with whom they will not join to form a government, as this can considerably influence voters.

While Dzurinda claims he is willing to do everything in his power to create a good alternative to the current government, Prime Minister Fico says that the right does not offer any alternative at the moment – in contrast to the left, which he described as 'consolidated' and proposing a clear programme.

He said he missed having the opportunity for an elementary duel between left and right in Slovakia.

“It’s only empty talk, nothing else,” he said in reaction to the meeting of the opposition leaders, as quoted by TASR.

In this respect Kusý agreed with Fico, saying that the right is rather inactive.

“So far it hasn’t found the way to fight with Fico and with what his ruling coalition represents,” he said. “They are still searching for how to deal with Fico, but they don’t know how to do so.”

Contrary to Kusý, Mesežnikov believes that there is a programme alternative which so far does not represent a real power alternative, as it has not gained enough support from the voters.

“[Fico] keeps criticising the alternative on a daily basis; he is defining himself against the politics that were here before he came to power, and that proves that there is an alternative,” Mesežnikov said.

“I think that the PM is not very sincere when he says that he is missing some unified right,” Mesežnikov added. “On the contrary, he is content with the current situation and he is probably afraid of any closer cooperation or regrouping on the right side of the political spectrum.”