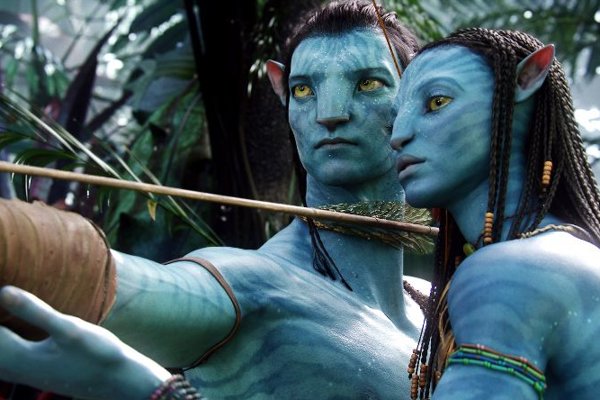 IT'S ONLY been a couple of weeks since the Christmas festivities and you might still be steering clear of overindulgence. If so, James Cameron’s Avatar – 10 years in the making, a running time of nearly three hours and a $280 million budget splashed on bountiful, opulent computer-generated imagery (CGI) – is probably best avoided on health grounds.

Avatar is an outrageous assault on abstinence. Set on the faraway moon of Pandora, a population of 10-foot tall, feline-featured humanoids (and a cast of other fantastical fauna) flit through a jungle of bright turquoise, purple and orange, where verdant mountains also float in the sky. The moon is sustained by a wondrous “soul tree”, all willowy tendrils and translucent energies, into which the population – the Na’vi – can plug their bodies, both to recharge and to connect as part of a pantheistic nirvana.

This is as visually ambitious a film as has ever been produced and the only way to experience it is to visit: we are invited to don Aviator-style shades through which to have our minds boggled in 3D. With the going so good, it’s a drag to have to worry about a plot, especially one penned by Cameron. But all delights come at a cost, and the lustrous mastery of Avatar merely comforts us for a sermon to follow.

The year is 2154 and we enter this world alongside a unit of environmental scientists, including Sigourney Weaver’s Dr. Grace Augustine and a paraplegic former marine named Jake Sulley (Sam Worthington). After a six-year journey, the explorers arrive to find a thriving moon community, but all is not quite ideal in the idyll.

The human species has once again loused up its own planet and is now having a crack at Pandora. Grace’s crew are intent on study rather than slaughter, but there is also an army led by the slithering Parker Selfridge (Giovanni Ribisi) and his henchman Colonel Miles Quaritch (Stephen Lang). Those two are hell bent on extracting a “super mineral” from Pandora known as “unobtanium” (really) and worth $20 million per kilo. Force will be utilised if necessary.

Both factions intend also to employ a rather neat progression in computer game technology. The scientists have developed avatars of the Na’vi – functioning replicas “driven” by transposed human consciousnesses. Jake’s avatar is embedded among the Na’vi with a dual mission: to learn their ways but also to persuade them to ship out and yield their natural gifts. Unsurprisingly, the indigenes are none too keen, and neither is Jake once he has fallen in love both with the ravishing princess Neytiri (Zoe Saldana) and with the hippie lifestyle. His military resolve soon dissolves, like a futuristic gap year student, last seen strumming a guitar in a youth hostel in Goa.

There’s certainly some fun to be had on Pandora – riding winged beasts among hovering waterfalls seems like a blast. But otherwise Jake is signing up for a humourless life. The Na’vi are never so content as when earnestly and superciliously bonding with nature and their default position when threatened is to strut and rant and draw back their bows to fight. This macho jostling, jealousy, and grand rhetoric is not so different from their human adversaries’. Back at base, there is snarling avariciousness and impatience among the humans, where it is also interesting to note what prosaic trappings Cameron expects will endure 150 years into the future. Although mining will be plotted on hologramatic screens and carried out by mighty space marines, their commanders still putt golf balls into mugs along the floor of their offices. Smugness stands the test of time, along with wanton aggression, and soon battle lines are drawn with the obdurate Na’vi.

What we have after that is a remorseless and idiot-driven invading force, stomping blindly and bloodily into hostile foreign territory, seeking to plunder vast natural reserves for purely commercial benefit. Did someone say metaphor? Cameron’s CGI stretches to epic battle scenes, which continue to dazzle, but if this is a vision of the future of cinema, then in terms of character, plot and motivation, we should expect something drearily similar to what we already have.