E-toll now in full force - but at what cost

ALMOST four months after the wobbly launch of an electronic system to collect highway tolls for vehicles weighing over 3.5 tonnes, the situation on Slovakia’s roads appears to have settled down. The European Commission is still awaiting answers to its questions about how the gigantic tender to develop the nationwide system ended up being awarded to the most expensive bidder, whose €850-million offer was almost one-third more expensive than its cheapest rival’s. But truck drivers have at least stopped blocking main transport arteries to get the new system cancelled, as they had been doing earlier in the year. 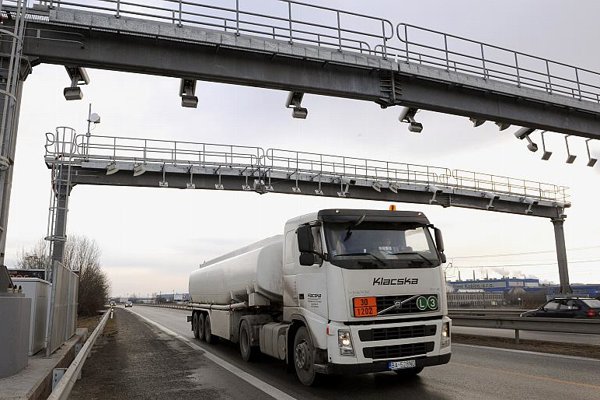 ALMOST four months after the wobbly launch of an electronic system to collect highway tolls for vehicles weighing over 3.5 tonnes, the situation on Slovakia’s roads appears to have settled down. The European Commission is still awaiting answers to its questions about how the gigantic tender to develop the nationwide system ended up being awarded to the most expensive bidder, whose €850-million offer was almost one-third more expensive than its cheapest rival’s. But truck drivers have at least stopped blocking main transport arteries to get the new system cancelled, as they had been doing earlier in the year.

The impact of the new system on the transportation market is still not clear but transport experts say they have not noticed any big changes in companies’ operations. This is even though the new system increases road carriers’ costs, something which the Transport Ministry had hoped would shift some goods off the roads and onto the railways. Under the new system, which began on January 1, motor carriers must pay to use highways on the basis of kilometres driven, in contrast to the previous sticker-based system. For most, this has meant a significant rise in costs.

“Nothing indicates that the introduction of the e-toll will change the ratios on the transport market,” František Kocúr, divisional director of the research and development department at the Transport Research Institute told The Slovak Spectator. “Road transport, which is flexible, fast and reliable, dominates from the viewpoint of performance, and other kinds of transport can compete with it … only with difficulty.”

Nor does Slovakia’s Association of Road Transport Operators (Česmad) expect the e-toll system to change road transport’s share of the market.

However, road transport firms complain that the new system has increased their costs significantly and say that some of them may even be forced out of business.

“It will depend on how they are able to incorporate the enormously high costs into their transport prices,” Reich said, adding that firms that are unable to incorporate the toll costs may have to close. “On the route from Bratislava to Žilina a 40-tonne truck previously paid €907 without VAT for an annual highway sticker,” Česmad president Peter Halabrín said in early January, as quoted by SITA. “When paying the e-toll, it will pay €14,000-€16,000 annually. This is an incredible increase.”

One of the goals in launching the electronic-toll system, according to the Ministry of Transport, Posts and Telecommunications was to make the system of fees in railway and road transport fairer.

Transport Minister Ľubomír Vážny has said he hopes freight transport will move onto the railways because Slovak highways, as judged by their traffic intensity, now sometimes operate at 80- to 100-percent capacity. By contrast, only 25-40 percent of rail freight capacity is currently being used.

“Certainly it is not my goal to liquidate any motor carrier, either small or large,” said Minister Vážny in late December 2009, as cited by SITA, adding that the public and users of road infrastructure would always perceive the toll system negatively because they had previously been accustomed to using roads at low cost.

It is too early to assess the effects of the e-toll system on railway transport. Its launch was accompanied by a reduction in the excise tax on diesel and a postponement of toll collection on first-category roads, which has complicated evaluation of the impact the new system has had on railway transport.

“For the time being we can say that in internal transport of wood for the first three months of 2010 we registered an increase of 165 percent compared with the same period last year,” Margaréta Grecová, spokesperson for railway cargo company Železničná Spoločnost Cargo Slovakia (ZSSK Cargo), told The Slovak Spectator. “Compared with the ‘pre-crisis’ year of 2008 this represents a 22-percent increase. It is not technically possible to calculate the share of the toll system in this increase. We perceive it as a summary of various influences, either our trade policy, the toll, customers themselves, etc.”

With regards to equalising conditions for individual kinds of transport, ZSSK Cargo sees the introduction of the e-toll scheme as only a partial step.

“While railway transport bears the actual costs, in the full extent, for the usage of infrastructure on all routes, road carriers cover only part of the costs for the road infrastructure,” said Grecová. “Introduction of the e-toll is only a partial step in making the terms for doing business for individual kinds of transport equal and it has simultaneously brought, from our point of view, counter-productive measures.”

According to Grecová, reduction of the excise tax on diesel diminishes one of the original intentions of the e-toll: to move some freight transport from road to rail.

“This reduces the operating costs of all road carriers regardless of the extent of usage of tolled roads,” said Grecová, adding that this measure puts road transport firms at an advantage to railway transporters, especially if they use mainly non-tolled roads.

ZSSK Cargo believes that if conditions for doing business for all kinds of transport are not harmonised, the road infrastructure will be used up to its limits while the railway network would still have free capacity.

Some hope is being pinned on intermodal freight transport, which involves the transportation of freight in an intermodal container or vehicle, using multiple modes of transportation, without any handling of the freight itself when changing modes.

In order to move flows of goods from road transport to intermodal transport it is necessary to carry out measures in the technical, technological, promotional as well as economic fields. Kocúr, of the Transport Research Institute, said he expects an increase in freight transport volumes in future years. But he sees a large problem in the missing connection between logistics parks and the railway infrastructure and the existing parks’ primary orientation towards road transport.

The launch of the e-toll system, on January 1, 2010, was accompanied by huge protests by road transport operators, who complained about incorrect calculations for the road sections driven and bad organisation of registration.

Dissatisfied truckers created a new organisation, the Slovak Union of Motor Carriers (UNAS), and organised protest actions including blocking traffic to force the government to change the rules covering the electronic toll- collection system and its fees, and to postpone its launch.

The cabinet retreated in some areas, for instance by reducing the excise tax on diesel and dividing some road sections used to calculate the tolls into smaller sections.

But UNAS has not yet given up its fight. In mid April the disgruntled firms said that foreign transporters had decided to solve their e-toll-related problems via their embassies.

“Our toll system prevents them from carrying out their business activities,” UNAS informed the SITA newswire, adding that the union plans to provide information on April 27 about serious flaws in the system that it says are harming transport firms.


The money flows in

During the first three months of 2010, the system’s operator, SkyToll, collected almost €25.79 million in tolls on behalf of the state. Out of this sum, foreign truck operators paid over 40 percent. So far, almost 160,000 vehicles have been registered to use the new system.

“The amount of collected tolls is growing,” said SkyToll CEO Matej Okáli, as quoted by the SITA newswire. “The fees collected in March, which are two times bigger than in the previous two months, prove this.”

However, the rise was in part because from March 1 first-category roads, temporarily exempted from tolls after protests by truckers, were again included in the network of roads subject to payment.

As of March 1, trucks and buses are again obliged to pay e-tolls on 1,442 kilometres of first-category roads, along with 397 kilometres of highways and 170 kilometres of dual carriageways, according to the e-toll website operated by SkyToll.

Of the measures adopted earlier this year in response to criticism from road transport firms, the Transport Ministry extended the validity of the so-called transit ticketing system until the end of June.

Under this scheme, which was criticised by the European Commission, foreign carriers need not register with the electronic system or install the associated on-board unit to calculate the payable toll. Instead, they can choose from 18 transit routes across Slovakia and just pay in advance a fee for the route they choose.