THE SLOVAK National Party (SNS) is once again revealing its true colours: the party is waging its parliamentary election campaign with a billboard featuring a bare-chested Roma man whose photo was digitally altered by adding tattoos and a thick golden chain. The SNS billboard slogan: “So that we do not feed those who do not want to work”. 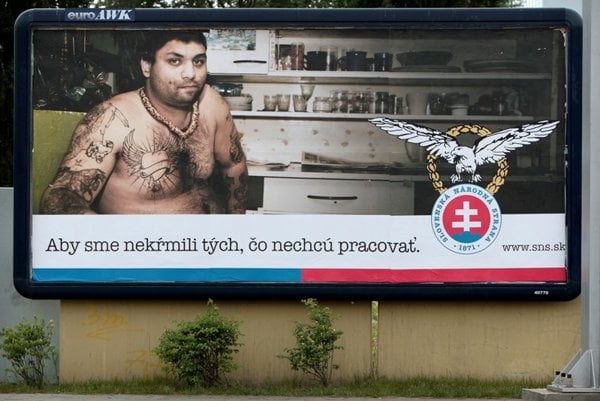 The SNS billboard poster (above), and a photograph (below) taken later of Lukáč Bart, the Roma man featured in the poster. (Source: Sme - Tomáš Benedikovič)
Font size:A-|A+

THE SLOVAK National Party (SNS) is once again revealing its true colours: the party is waging its parliamentary election campaign with a billboard featuring a bare-chested Roma man whose photo was digitally altered by adding tattoos and a thick golden chain. The SNS billboard slogan: “So that we do not feed those who do not want to work”.

Political observers had earlier suggested that various extremist groupings might season the run-up to the June elections with racial attacks to incite frustrated Slovaks. But this image and slogan is being laid out by a political party which is currently part of Slovakia’s ruling coalition and which claims to be in the mainstream.

One human right activist has already taken legal action against SNS, charging that the billboard incites racial hate while another activist has asked citizens to cover the head of the Roma man on the billboard with a photo of SNS leader Jan Slota and alter the text to read: “So that we do not elect those who do not want to work”.

Various NGOs and Roma civil rights organizations called the billboard photo and its message outrageous while several Slovak politicians also condemned it. The billboard company, euroAWK, has expressed regret that a racist image appeared on its advertising spaces and said on May 5 that it would replace the image with different billboards.

The SNS billboard campaign did not surprise Laco Oravec, programme director of the Milan Simecka Foundation.

“What else could we have expected from SNS,” Oravec told The Slovak Spectator. “We have all known. They have never said it so openly before, but it indeed is a party which minimally over the past six months, but also historically over more years, has continuously spread xenophobic and racist opinions. This is not the first [SNS] message falling within the anti-Roma category.”

The human rights organisation People Against Racism said that the SNS campaign is an effort to manipulate and exploit stereotypes of Roma.

“Such a depiction in the context of a billboard slogan supports the popular cliché that Roma are the ones who do not want to work and who are decorated with gold while living at the expense of the majority,” said Irena Bihariová, a lawyer with People Against Racism. “The SNS is obviously not aware that Roma society consists of stratified social groups, many of whom do not rely on state support.”

The deputy chairwoman of SNS, Anna Belousovova, said that the billboard campaign is neither racist nor anti-Roma. She suggested that it is all about statistics.

“The largest percentage of those who do not want to work and who siphon the most from the social system are the Gypsies,” Belousovova said in an interview with Sme daily.

The daily also noted that Marian Kotleba, the former leader of the Pospolitost extremist movement, had distributed a similar leaflet. A criminal complaint was filed against Kotleba because of that leaflet.

“These documentary materials reflect part of the reality which is necessary to change,” said Dusan Strauss of the SNS press department.

There are serious moral and legal questions about the image being plastered on billboards across Slovakia. The photograph of the man in the billboard, Lukac Bart, had been digitally altered because Bart does not have tattoos on his chest, nor does he wear a thick golden chain around his neck. Sme reported that when the photograph was taken, Bart did not know that his image was to be used by SNS for its election campaign. Bart and his brother were paid €150 for photographs that were taken in a neighbour’s kitchen. Bart told Sme that he tries to make a living by collecting scrap iron and that he does want to work.

The SNS, and especially its leader Slota, have been known for making anti-Roma statements in the past. But Oravec of the Simecka Foundation says what is new is that SNS has now chosen to use anti-Roma sentiments as a tool in its political campaigning.

Oravec suggests that the billboard politically legitimizes racist and xenophobic opinions and shows that part of the political elite of Slovakia identifies with this attitude, which in the end can fortify this attitude within the public.

“Of course it damages the image of Roma, but on the other side it also healthily polarizes society,” Oravec told The Slovak Spectator, adding that “in a racist society we have to get divided into those who are rejecting such things and those who are supporting them and the fact that there is this billboard will allow drawing a clear line between such people in Slovakia.”

Oravec has also tracked the tendency to exploit Roma issues in the policies and actions of other political parties in Slovakia and suggests that the country’s political scene is getting radicalized.

According to Oravec, similar extremist attitudes appear in other developed countries in which xenophobic anti-minority opinions are used to effectively agitate among people who share racist attitudes. “Tougher is better – that is what works for them”, Oravec said, adding that at the same time this attitude might repel some wavering voters who might like some aspects of the nationalist party platform but reject extreme racist attitudes.

Human rights activist Ondrej Dostal has filed a criminal complaint with Slovakia’s General Prosecutor’s office claiming that the SNS campaign incites racial hate. Dostal also contacted the country’s advertising watchdog, asking it to investigate whether there has been a violation of ethical principles. Slovak law stipulates that racial hate crimes can be penalized by up to three years in prison.

Roma NGOs have vigorously protested against the billboard campaign.

“We condemn the SNS campaign and view it as an unjustifiable and inexcusable attack against Roma,” Frantisek Tanko of the Union of Roma in Slovakia told Sme.

The campaign has also been condemned by the Council of Roma Non-Governmental Organizations and the Party of Roma Coalition, which according to Sme, will be the only Roma political party with candidates running in the June parliamentary elections.

People Against Racism’s Bihariová told The Slovak Spectator that her organisation will take legal action against SNS because its billboard campaign has the potential to evoke even stronger, hateful emotions towards the Roma community.