Fico fails in lawsuit against publisher

FORMER Prime Minister Robert Fico was unsuccessful in his lawsuit against Petit Press, the publisher of the Sme daily as well as The Slovak Spectator, for printing a cartoon by Martin ‘Shooty’ Šútovec which depicted the prime minister as lacking a spine. 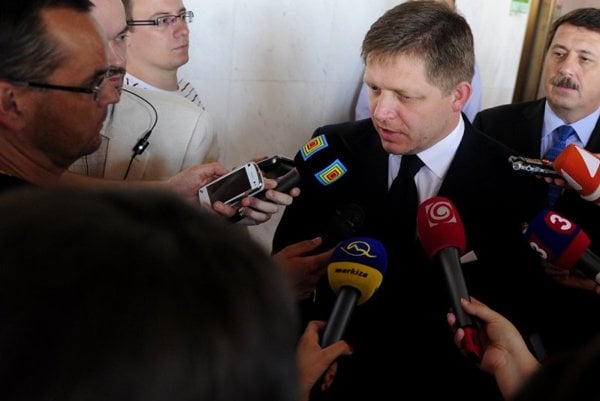 Relations between Robert Fico and the Slovak media had been tense during his term as a PM. (Source: TASR)
Font size:A-|A+

FORMER Prime Minister Robert Fico was unsuccessful in his lawsuit against Petit Press, the publisher of the Sme daily as well as The Slovak Spectator, for printing a cartoon by Martin ‘Shooty’ Šútovec which depicted the prime minister as lacking a spine.

The cartoon was published in early July 2009 when Fico had cancelled several official meetings on his schedule due reportedly to acute pain in his back. The cartoon featured an obviously nervous man wearing a red tie who is told by his physician after review of his x-ray that the problem could only be “phantom pains” because the patient had no spine.

“The depicting of the plaintiff without a cervical spine expressed a satirical and ridiculing picture of the features of the plaintiff as a politician, thus the cartoon was related to his public position and did not ridicule his then-health status,” the judge wrote in the decision rejecting the suit, adding that at the time the cartoon was published Fico was a publicly-known person serving as prime minister and the chairman of the strongest political party and for that reason he was “obliged to bear a greater amount of criticism”, Sme reported.

Fico had asked for €33,000 in damages from Sme in the lawsuit, arguing that the cartoon made fun of his serious health condition while at the same time ridiculing him as a person.

Tomáš Kamenec, the lawyer representing Petit Press, said the ruling is important to support freedom of speech in Slovakia.

“It’s important for Slovakia to show that it belongs among democratic countries that value freedom of speech more than the feelings of a politician,” Kamenec said, as quoted by Sme.

The libel action against the publisher stirred interest in international circles as it followed a series of other lawsuits which resulted in the country’s courts awarding over €300,000 in damages to public officials in civil cases brought against publishers and other media during 2009.

Media observers placed Fico’s legal action in the context of the propensity of Slovak public officials to sue publishers for hefty damages but they also stated that a libel suit challenging a cartoon with satirical qualities represented a particularly heavy-handed reaction by a politician in a society that values a free press as a fundamental principle. Media legal experts said being subject to public scrutiny – and sometimes ridicule – comes with the territory for elected officials and politicians who are seeking office.

Fico has had a somewhat uneasy relationship with the media and several times described the press as a “new opposition force” that was biased and harmed national and state interests. Fico also said that the press failed to “stand behind the common people”.

International organisations and members of the diplomatic community have voiced concerns about the independence of the judiciary when adjudicating these kinds of libel cases. Several diplomats also expressed concern that despite the availability of multiple remedies under Slovakia’s Press Code enacted last year, many public figures have chosen to file libel suits demanding high financial compensation.

When Fico filed the cartoon lawsuit against Sme, the International Press Institute (IPI) commented to The Slovak Spectator that when persons run for public office they should be fully aware that they are subjecting themselves to a closer level of public scrutiny, criticism, and, at times, ridicule. IPI stated that these are part and parcel of the job of a politician and that politicians are lampooned in cartoons all around the world every single day – and even if this seems irreverent it should not be a matter for the courts.

After the lawsuit was filed, Šútovec chose to participate in the election campaign by using his cartoons to encourage people to vote against the three ruling parties, led by Fico’s Smer.

The theme of Šútovec‘s multi-media campaign was a cartoon featuring caricatures of Smer head Robert Fico, Movement for a Democratic Slovakia (HZDS) leader Vladimír Mečiar and Slovak National Party (SNS) chair Ján Slota depicting them as bandits lugging away loot over the caption “What is yours is ours; what is ours is none of your business”. That image, along with another cartoon ridiculing the election billboards of Robert Fico, appeared on about 200 billboards and eight big-boards all around Slovakia. Other parts of the campaign included distribution of about 200,000 stickers and 100,000 postcards and cash registers printing receipts with slogans.

The costs of Šútovec‘s campaign were covered from over €60,000 in donations made by more than 2,000 citizens. Šútovec’s original idea was to rent just a couple of billboards to display his caricatures and he intended to pay the estimated €5,000 for the billboards out of his own pocket. But when he posted an appeal for help on the internet the response exceeded all his expectations.