DIVÉ MAKY, or Wild Poppies, a project which seeks out and nurtures talented Roma children culminated on Saturday, August 14, with a Cigánsky Bašavel, or Gipsy Feast, at Červený Kameň Castle not far from Bratislava. The Divé Maky project includes a year-round system of tutors who oversee participants’ school results, training and lessons, but also involves intensive workshops several times a year. 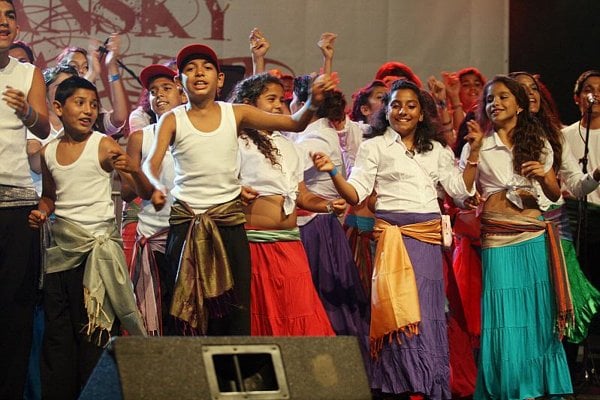 DIVÉ MAKY, or Wild Poppies, a project which seeks out and nurtures talented Roma children culminated on Saturday, August 14, with a Cigánsky Bašavel, or Gipsy Feast, at Červený Kameň Castle not far from Bratislava. The Divé Maky project includes a year-round system of tutors who oversee participants’ school results, training and lessons, but also involves intensive workshops several times a year.

The August 14 event comprised, apart from the children’s musical and dance performances, a short play about how Roma came to exist and why they have forgotten where they came from, an auction of the best paintings by children from the project, Roma handicrafts, an athletics performance, a dance and artistic workshop, and concerts by other, professional Roma bands and musicians like Gipsy.cz, playing hip-hop; Czech group Terne Čhave, playing world music; Imer Traja Birzani, a Slovenian group playing jazz and Balkan Roma music; Fláre Beás, a Hungarian group playing traditional Hungarian-Roma music; the Merci dance group from the Czech Republic; and dance “battles” between the groups Spin, Credance, Partia and, of course, Divé Maky.

To satisfy all the senses, there was a typical Gipsy pub where cooks prepared traditional meals in front of visitors, a picture-taking corner where people could contribute their faces to unusual portraits, a tea-room, and the Divé Maky presentation tent showcasing the results of the project’s five-year history.

On a nearby meadow, bright red umbrellas revealed the individual profiles of the children participating in the Divé Maky programme. About 2,500 visitors came to support the sometimes shy and stage-struck children, to buy one of their pictures, to enjoy all kinds of Roma music or to taste typical meals. The weather might also have contributed to the event’s success – last year, which was the so-called “zero” year of the Bašavel, 1,000 people found their way to Červený Kameň. The organisers rented a car, a vintage Soviet Zhiguli car which they painted with a “Cigánsky Bašavel” sign and equipped with a blaring recording, to lure the residents of the surrounding villages to join the feast – in a funny way that could be either admired or hated but definitely not ignored. The evening programme gripped the audience and the young performers got the public clapping, dancing and singing.

The Divé Maky project has two branches that have now been connected. One of them finds talented youngsters from throughout Slovakia that need financial (and sometimes also moral) support to fully develop; currently, there are 75 children involved in this side of the project.

The other branch, a pilot project in Jarovnice, the biggest Roma settlement in Central Europe, is co-organised by the Pro Donum civic association and tries to support 100 specially selected local children by promoting their artistic, dramatic, musical, dance, athletic or academic talents. This project has been almost the first to address about 2,500 Jarovnice youngsters who often lack any positive role models, any idea about how to use their talents, and any support or supervision from their families. The children picked for the project must also maintain their performance at school (for the 'study' talents the criteria can be very strict) and follow the instructions of their tutors. The system chooses one Roma tutor for every child who, apart from guiding the child through the project, also liaises with their family. These two project’s branches meet at workshops which take place several times a year (an autumn meeting will take place soon), at auctions of artworks, and at the Bašavel, which represents, in addition to a CD released a year ago and some public performances, the main forum to display the results achieved.

If you missed the opportunity to discover these attractive sides of Roma culture, to taste and watch and listen, you can look forward to next year’s event (the feast will hopefully become a regular August tradition), buy the Divé Maky CD, visit www.sanca-pre-talenty.prodonum.sk or search for ‘Cigansky Basavel’ on YouTube. Or maybe you can financially support the project, as there are always some children waiting to be included.