TTEOKGUK, naengmyeon, bibimbap: for some, they are terrible tongue-twisters; for Koreans, they mean home. But lately, these traditional Korean dishes have started to find their way into Slovakia – to the apparent delight of expats and locals alike. 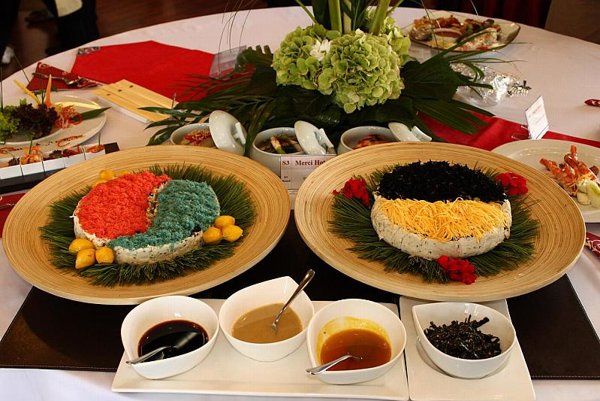 A wide selection of tasty morsels were prepared for the Korean Food Contest. (Source: Courtesy of the Korean Embassy)
Font size:A-|A+0

TTEOKGUK, naengmyeon, bibimbap: for some, they are terrible tongue-twisters; for Koreans, they mean home. But lately, these traditional Korean dishes have started to find their way into Slovakia – to the apparent delight of expats and locals alike.

According to an estimate by the Korean embassy, the number of the Republic of Korea's expatriates residing in the country has increased from a few dozen to 2,000, following the advent in Bratislava, Trnava, Žilina and Nitra Regions of a string of firms such as Samsung, LG and Kia Motors.

And it seems the Korean giants have boosted not only Slovakia’s industry, but also its service sector, as the growth of the Korean community was followed by the establishment of smaller Korean businesses that quickly seized this new opportunity to help Korean expats overcome homesickness by providing them with original Korean products.

Among these, the vast majority are restaurants, canteens and grocery stores.

“Koreans are very much concerned about what they eat and cannot survive long without Korean food,” explained Yooni Suh, a Korean with British citizenship who moved to Bratislava from the UK three years ago to open Seoul Plaza, a supermarket selling Asian food.

Although his original idea was to supply the expatriate South Korean community, Suh reckons that today between 60 and 70 percent of his customers are Slovak.

Encouraged by the success of his business, the retailer is now planning to venture into new projects, but he remains tight-lipped about them.

“We are considering launching a franchise business as well as expanding our retail business, plus some exciting things I can’t talk about right now,” he said.

Bumil Park, second secretary and consul at the Korean embassy, confirmed that Koreans love Korean food. He said he believes that the success of the Korean-oriented dining industry in Slovakia can be explained by the fact that Korean people are particularly attached to their cuisine, and want to eat Korean food wherever they are.

On the other hand, he added that food, apart from making expats feel less homesick, can also serve as a tool for bridging cultures.

“Food plays a very significant role in every single society and it is therefore a good point of departure for getting to know a nation and its lifestyle,” he told The Slovak Spectator.

It was out of this conviction that, as part of its effort to promote Korean culture among Slovaks, the embassy last year decided to start a new tradition: it held the first edition of its Korean Food Contest, a cookery competition open to both professional chefs and amateur cooks.

“The purpose of the event is to popularise Korean cuisine in Slovakia,” said the consul. “I hope it will encourage local restaurants and canteens to start offering Korean dishes in their menus, and I also hope to see courses in Korean cuisine included in the curricula of hospitality management schools."

Around 35 participants, divided into twelve teams including both Koreans and Slovaks, competed in the contest, which took place in Chorvátsky Grob near Bratislava in September 2010.

Each team was required to prepare two different Korean dishes. These were then marked by a jury chaired by H.E. Nicolaos D. Kanellos, Greece’s ambassador to Slovakia. A typical team was composed of a Korean chef, a Korean housewife, a teacher at a Bratislava hospitality management school and even a few children from expatriate Korean families.

One of the main awards went to Hum Jae Park, who runs a hotel with restaurant just outside Galanta, as well as a canteen in the town for Koreans working in the Samsung Electronics plant there.

For the first course, she prepared a surprising combination of bulgogi, a traditional Korean dish made from marinated beef, and mozzarella. The second course was light bean curd with vegetables.

“The prize still fills me with enormous pride,” said the chef, who graduated from the prestigious Institute of Korean Royal Cuisine. “Not only because it was a flattering appreciation of my culinary skills, but also because I was able to make Slovaks taste a bit of Korea.”

Peter Janík, manager at Hum Jae Park’s Merci Hotel, said tasting Korean food can indeed be a very special experience for a Slovak. “When I first went to a Korean restaurant, I was very surprised by both the character of the food and the way it is served,” he told The Slovak Spectator. “What surprised me the most was the fact that Koreans eat rice, soup and kimchi [a traditional Korean dish made of seasoned vegetables] at almost every meal, including breakfast.”

Another difference between Slovak and Korean dining habits Janík mentioned is the use of chopsticks – a sticking point for many – and the attitude to rice.

While Slovaks usually think there are at most two or three varieties of rice, Koreans are able to discriminate between a huge number of rice varieties, he said, adding that rice seems to be as important for Koreans as bread is for Slovaks.

In spite of these dissimilarities, Korean cuisine is obviously becoming increasingly popular in Slovakia.

“Both our Korean and Slovak customers have been suggesting we should extend our business to the capital,” Janík stated. “We have therefore decided to open a new restaurant in Bratislava in May 2011.”

The new eatery will thus join Bratislava’s two existing Korean restaurants, Seoul Garden and Maehwa, and several other places that serve Korean food as part of their Asian fusion menus.