Starting at the rootlets

A PROVERB has it that it is better to teach those in need how to fish than to just give them fish. The first approach helps them forever while the second approach lasts for just a short while. It is likewise true that it is best to start every project at its rootlets, its smallest part.The Divé maky (Wild Poppies) idea was born from these tenets six years ago to help young Roma children from ostracised or socially handicapped families to further develop their talents. The project recently expanded to a tough Roma settlement called Jarovnice - one of the biggest Roma settlements in central Europe - where young people, determined to learn new things, were chosen, trained and prepared to join their peers from across Slovakia. 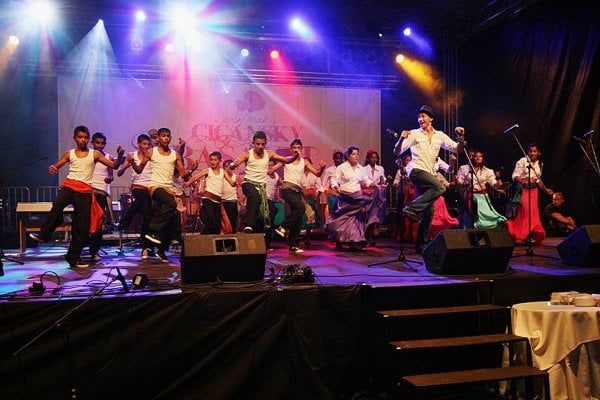 A PROVERB has it that it is better to teach those in need how to fish than to just give them fish. The first approach helps them forever while the second approach lasts for just a short while. It is likewise true that it is best to start every project at its rootlets, its smallest part.
The Divé maky (Wild Poppies) idea was born from these tenets six years ago to help young Roma children from ostracised or socially handicapped families to further develop their talents. The project recently expanded to a tough Roma settlement called Jarovnice - one of the biggest Roma settlements in central Europe - where young people, determined to learn new things, were chosen, trained and prepared to join their peers from across Slovakia.

The first results from the Divé maky project were individual concerts and auctions of children’s artworks - first public concert was in 2008 in cooperation with Ida Kellarová - but a year later, the project has grown into the very successful summer performance programme called Cigánsky Bašavel (Gypsy Feast) and a winter mini-Bašavel in Jarovnice.

The Slovak Spectator spoke to Lucia Dohnalová, the programme manager of Divé maky about its history and current activities.

The Slovak Spectator (TSS): How did this project begin?
Lucia Dohnalová (LD): The Divé maky project was founded in 2005 by Vladislava Dolníková, who had been working with Roma communities and in volunteering long before then. She invited Barbora Kohútiková to join in, and I came later, only in 2007. Mrs. Dolníková, we call her Vlaďka, felt she was not able – and probably also not meant – to ‘solve’ the Roma issue but she wanted to help at least to some extent, and logically, as every issue has its roots which should be first addressed, she saw the beginning of the solution in helping Roma children; helping them with education, as education is the first and the last solution for many human and global problems. So the idea for a scholarship project to educate young Roma was born and as many Roma are talented in many areas the idea focused on further developing their talents. Vlaďka was so persistent and she was so enthusiastic and convincing that she managed to overcome the initial troubles and the mistrust and reluctance in both Roma and non-Roma communities and made people believe in her idea. Currently, we have 69 children included in the programme and altogether we have helped more than 100 young people. Of course, we have had some dropouts, as the rules are quite strict and apart from continuously developing their talents, the children must also reach certain results at school. We support young musicians, singers, dancers, actors, athletes, artists and also some academic talents who really achieve good grades and who plan to study at higher levels, and thus to implement their talent.

TSS: How does the system work and who are the donors?
LD: We have individual donors for the children, mainly individuals who pick one student and follow him or her through the programme until he/she finishes the study. We also have companies and agencies which mostly help us to finance various events and the administrative operations – which is not a very thankful task that probably would not be attractive for individuals. But someone has to do this part, as well.

TSS: The Cigánsky Bašavel now takes place each August and in addition to the traditional Roma feast it gives the children a chance to show off what they have learned. How did it come to happen?
LD: After each Summer Academy in which the children are brought together in one place in Slovakia and trained by renowned professionals in the talent areas of the students, there was an auction of the children’s works of art and a concert. When one of our general partners saw the joy in our participants and their joint performance, it helped us organise a bigger event for the wider public where the achievements of the Academy could be shown. We called our first attempt the ‘Zero Year’ of the Bašavel but after we saw the interest of the audience, the next year became the really first Gypsy Bašavel. That year, in addition to the children and their performances and artworks, we had bands like Cigánski diabli and Gypsy.cz, typical Roma meals, auctions of paintings, a crafts market and the overall atmosphere of a merry Roma get-together. The Bašavel’s second year in 2010 brought even more people and for 2011 we are planning a daylong event with families with children coming for the early afternoon and young people coming for the evening concert.

TSS: And what about the mini-Bašavel in Jarovnice?
LD: In 2009, we launched a pilot project, a supra-structure of a wider Divé maky project, called Divé maky – šance pre rómske talenty z celého Slovenska (Wild Poppies – Chances for Roma Talents from the Whole of Slovakia). Out of thousands of young people who applied, we chose 100 of the most-talented ones who were then professionally trained and prepared to offer their talents at the December mini-Bašavel. Twenty of these young people will, hopefully, now continue with other participants within Divé maky. We would have been happy to include all 100 of them but we would probably not have found donors for so many of them so we had to be realistic.

TSS: How do you find professional artists to help? Please tell us about the project’s tutors.
LD: The first professionals we asked to work with us were painters Erik Binder and Peter Krajniak, who is now abroad, and dancer Laco Cmorej who chose the first participants at talent tests. Other artists, including actors, directors and dancers, not to forget Petra Polnišová who has become closely identified with our project, were recruited through personal contacts and recommendations. We find tutors in the same way – the first ones were picked through an ad in a specialised Roma newspaper and later others volunteered when they heard about Divé maky and its successes. Tutors are either Roma or individuals who have long experience with the Roma community who have their trust. They supervise the children throughout the school year; they also work with families who sometimes discourage their children more than supporting them, especially if the young children are moved to a boarding school. Our tutors also check school results and strive to motivate the children. If children study away from home, they usually have one tutor at home and one at the school location who helps them primarily to adapt to the new environment, new social tasks and contacts and to master their study workload.

TSS: What are some of your specific results?
LD: We have several talented participants now attending secondary schools and we have two secondary school graduates, Norbert in Bratislava and Janko in Košice, both musicians. We have another Janko who is an academic talent who is working hard to become a doctor. Martin has graduated from secondary school as well and while still competing successfully in sport, he is already making his own living and financing his sport activities. And this is maybe the final aim of our effort: for the children to be self-supporting, to find a job and learn how to make a good living. A university education or a post-secondary school course is nice, but may be a too-ambitious vision for many young Roma. Some participants have trouble studying further because, for example, their specialisation in cymbalo music is too specific and not taught at art academies. So our main satisfaction comes from seeing the children graduating from secondary school, finding a good job, and in some cases also continuing their studies. We want them to see the talents they have and how to use them for the good of all, and what they prefer to do with it is then up to them. We are glad to have had the chance to show them a different lifestyle, to give them positive examples and life-models, and to try to develop their skills.