THE HEALTH Ministry’s biggest project – the transformation of state-run hospitals into joint-stock companies, something which the government says will improve their financial management – will not happen as Slovakia's president intervened to block it. Even though this seems to meet one of the main demand of protesting doctors, it has not made them back down from their resolve to leave their jobs in December. 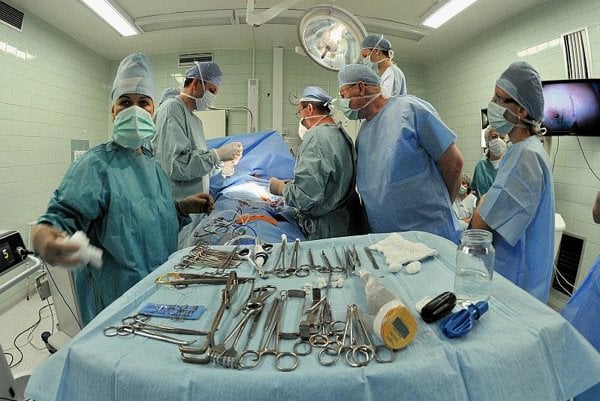 THE HEALTH Ministry’s biggest project – the transformation of state-run hospitals into joint-stock companies, something which the government says will improve their financial management – will not happen as Slovakia's president intervened to block it. Even though this seems to meet one of the main demand of protesting doctors, it has not made them back down from their resolve to leave their jobs in December.

President Ivan Gašparovič used his newly-acquired powers – which stem from the recent amendment to the constitution that allows him to prevent the caretaker government from taking decisions on important matters – to not approve the plans to transform 31 hospitals into joint-stock companies, one of the flagship measures of Health Minister Ivan Uhliarik.

A halt to the transformation is one of the demands of the Medical Trade Unions Association (LOZ) in its protest action launched in late September. But even after Gašparovič’s intervention the doctors have refused to withdraw their notices of resignation and said they were still ready to quit their jobs, potentially leaving some state-run hospitals in crisis.

“We insist on our resignations because we’ve got four demands,” LOZ leader Marian Kollár told The Slovak Spectator, adding that what he called the crisis in the Slovak health-care system could only be resolved if all four demands were met. Apart from halting the transformations, the doctors are demanding that hospitals observe the Labour Code on hours of work and other working conditions, that the government increase funding for health-care facilities, and that the salaries of doctors be gradually increased.

The transformation of the hospitals was to have been carried out on the basis of an amendment to the law on health insurance companies that took effect in April 2011 requiring hospitals that are operated directly by government ministries to be turned into joint-stock companies. The law mandates this to happen by the end of 2011 but allows the deadline to be postponed by six months.

While the cabinet said it was ready to pursue the first option, the main opposition party, Smer, initially lobbied for the latter, and to stop the transformations they initiated an extraordinary session in parliament scheduled for November 11 to deal exclusively with a law that would accomplish this aim. However, after the president’s intervention, Smer leader Robert Fico declared that the session was no longer necessary and that the problem has been resolved for now.

“We are realists and we are happy with the result that has been achieved,” Fico said, as quoted by the TASR newswire. If Smer is a part of the post-March 2012 government, it will halt the transformations for good, Fico pledged.

As part of the process, parliament earlier approved €350 million to help settle the debts of the 31 hospitals that are to be transformed and the hospitals were forgiven additional debts of €130 million that they had accrued in the form of a loan from the 2006-10 Fico-led government. After the president announced a halt to the transformations, it was initially reported that the cabinet would continue with its original plan to clear the debts of the hospitals, which are currently estimated to be around €500 million.

But later, Finance Minister Ivan Mikloš announced a halt to the debt-settling process too, arguing that the money was to help “the financial stabilisation of transformed hospitals”, meaning that it was directly tied to the transformation process, the Sme daily reported.

Some €310 million of the whole package has already been distributed to hospitals to cover their debts but the ministry is now refusing to hand over the remaining €40 million, and ministry spokesperson Martin Jaroš, in an interview with Sme, would not rule out a move to recover some of the money that had already been transferred.

But it does not appear that the government is united on the issue.

“No minister is above parliament and parliament approved €350 million for settling the debts,” Uhliarik said, as quoted by Sme, adding that “things could change tomorrow”.

Even though stopping the the transformation of the hospitals has regularly been presented by the hospital doctors as the most pressing demand in their ongoing protest action, which involves over 2,000 of them – out of a total of 6,500 doctors – resigning from their jobs at over 30 hospitals, the announced halt has not persuaded them to withdraw their notices.

“As soon as the four demands, which we consider all very important, are fulfilled, we are ready to withdraw our notices,” Kollár said.

“Transformation, the main requirement, has been stopped,” Uhliarik told a press conference on November 8, adding that the strike had thus become “only about salaries”. He called on the doctors’ unions not to “use patients as hostages”.

“That is a Greek path and I refuse to embark on it,” he said.

Kollár stated that only days earlier the health minister was ready to agree to the three other demands as long as the doctors dropped their opposition to the hospital transformations.

“Now that [the transformation] is solved, suddenly he accuses LOZ of having one sole problem, salaries,” Kollár said. “I really don’t know what sort of game he is playing right now and whether he has still got things under control. Because a minister cannot give differing statements every day.”

LOZ representatives met Prime Minister Iveta Radičová on November 8 and she agreed with the doctors that she would approach experts to try to find a solution for the hospitals that would secure rational and effective use of public finances and admitted that this need not necessarily be a joint-stock company, the SITA newswire reported.

Radičová also said that the money that the state expects to save thanks to a newly-passed law on drugs could be used for doctors' salaries, according to SITA.

Kollár said LOZ and Radičová will meet again soon, in about a week.

“We will try to solve everything in a way that the government, the doctors and also the patients are left satisfied,” Kollár told The Slovak Spectator. “We’ll do everything so that the doctors do not to have to stay at home after December 1.”

The threatened exodus of doctors could result in a potentially serious situation. Hospitals which do not have enough doctors will probably need to combine some wards, for instance trauma and orthopaedic wards, but in that event it is also very likely that hospitals will need to lay off other staff, including nurses, the health minister stated after meeting with directors of health-care facilities on October 26.