THE SO-CALLED Javorová cesta (Amber Route) on the Buková hora (Beech Tree) ski slope in Tatranská Lomnica was full of oddly-clad skiers on March 3 when winter sports enthusiasts tried retro skiing on wooden boards without modern amenities and worst of all – without ski lifts. 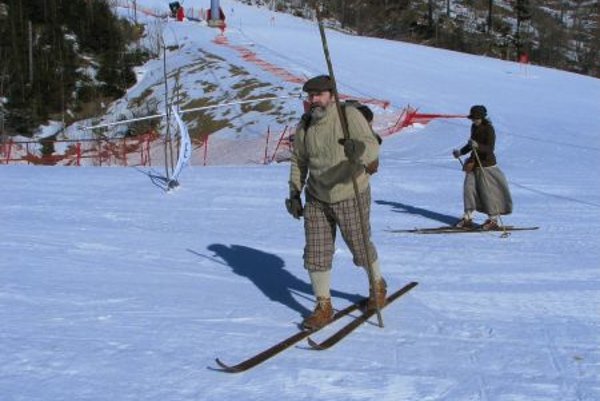 THE SO-CALLED Javorová cesta (Amber Route) on the Buková hora (Beech Tree) ski slope in Tatranská Lomnica was full of oddly-clad skiers on March 3 when winter sports enthusiasts tried retro skiing on wooden boards without modern amenities and worst of all – without ski lifts.

The 10th year of a retro ski competition known as Majstrovský prebor v lyžovaní sjazdovom (Champions Race in Downhill Skiing) attracted many of spectators as well as the daredevils who were willing to compete in a strong wind with antique equipment.

“The atmosphere is great. Although the wind was strong in the morning, it was blowing more mildly later and the sun was shining. I think that those who were just watching had more fun but the contestants had good spirits too, even though there have been some falls and scratches,” said Alena Varadyová of the sponsoring organisation to the TASR newswire. She noted that competitors used old-style wooden skis with strap bindings and leather ski boots. The ski outfits were historical as well as most women skied in skirts.

“The ladies did have the best time, probably thanks to the clothing. When the wind blows into a wide skirt they could achieve enormous speed; so we will consider a special category – hang-glider ski,” said Varadyová, somewhat jokingly. The youngest participant that day was just eight, while the oldest was over 70.

Varadyová told the SITA newswire that interest in what she called “period skiing” has been growing every year. “This is a commemoration of older times when skiing was only beginning in the Tatras; and it is also a chance for people to come together, relax and have fun, forgetting their demanding work or duties,” she added. Because of the strong wind the ski lift could not be operated but Varadyová said the competitors did not really mind as 100 years ago there were no ski lifts and they were closer to the reality of that period when everyone carried their skis to the top of the hill.

Adam Žampa, one of the Alpine skiing racers, said the old-style skiing could not be compared with current techniques and equipment. “I would recommend that all those who keep complaining about contemporary equipment and outfits should try this – and everything will seem flawless to them,” Žampa told TASR.

Vladimír Hubač, another participant, is a fan of both history and skiing and has been building a skiing museum in Tatranská Lomnica since last year that he expects to open in June or in the autumn of 2012. The museum will offer a history of skiing in the High Tatras as well as display historical ski equipment such as bindings and boots. The museum will also commemorate some early proponents of skiing in the Tatras such as Mikuláš Szontág and Michal Guhr, who participated in the Winter Olympics from Czechoslovakia and built ski jumps in Tatranská Polianka with his own money, Hubač told SITA.