ITALIAN conductor Nello Santi, aged 80, who worked with Giuseppe di Stefano and Renata Tebaldi, conducted two performances of Giuseppe Verdi’s Requiem in Bratislava in early April. The maestro, who celebrated 60 years of conducting last December, offered an outstanding performance at the invitation of Peter Dvorský, the head of the Opera of the Slovak National Theatre (SND) who had sung with the maestro years ago as an opera tenor. 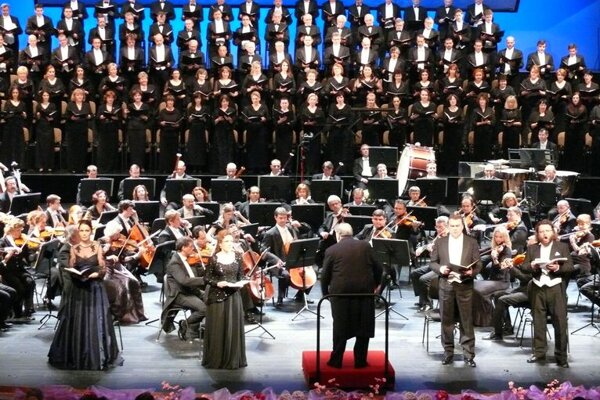 ITALIAN conductor Nello Santi, aged 80, who worked with Giuseppe di Stefano and Renata Tebaldi, conducted two performances of Giuseppe Verdi’s Requiem in Bratislava in early April. The maestro, who celebrated 60 years of conducting last December, offered an outstanding performance at the invitation of Peter Dvorský, the head of the Opera of the Slovak National Theatre (SND) who had sung with the maestro years ago as an opera tenor.

“My secret desire was to bring to our theatre – apart from outstanding operatic singers – also a personality from behind the conductor’s stand, something which is not very common,” Dvorský stated at a press conference.

“I must say that my contact and collaboration with the orchestra and choir of the SND have been excellent. They say that the spark between a conductor and orchestra comes only after ten minutes; here, it took only eight minutes, so two minutes better than the average,” Santi said with a smile.

The requiem composed by Verdi, although perceived as a sacral piece, is traditionally performed outside of liturgical services. “I think there is hardly a more apt work for the Easter festivities than Verdi’s Requiem, this spiritual mass and kind of confession. Many might have left for the holidays but those who stayed – and those who even came to Bratislava for Easter – could enjoy this phenomenal work,” Dvorský said. The performances were held on April 6 and April 7 and in addition to the SND orchestra and choir, the Spevácky zbor mesta Bratislavy (Bratislava City Choir) sang along with soloists Adriana Marfisi (soprano), Terézia Kružliaková (mezzo-soprano), Miroslav Dvorský (tenor) and Jozef Benci (bass).

Santi, who has worked for opera houses like La Scala in Milan, the Royal Opera House in London, the Paris Opera, Teatro Colón in Buenos Aires, the Vienna State Opera and the Metropolitan Opera in New York, hailed old “masters of the baton” and especially the late Arturo Toscanini, who he called not only the best conductor but literally the “only conductor”, stating that there had been no better conductor before and it is doubtful anyone better will come.

“He was particularly the best to convey the legacy of opera and teach successors. When compared to current conductors, he had much less coverage in the media, less publicity, but he still managed to persuade and be celebrated. We now have a host of young heads of orchestras; we call them ‘baby conductors’ who give interviews for various media, promoting themselves. Though Toscanini did not have such opportunities he still remains, even after his death, their biggest competitor due to his greatness. Toscanini had the soul of a conductor and he conducted in a way so that others could learn from him. That is why he remains a personality to draw experience from,” Santi said

When asked about the direction and perception of opera in the 21st century, the maestro said there was “promising material to work with” but added that in the mid-20th century the opera had incomparably better singing talents. The conductor, whose experience spans several generations, expressed his disappointment with some developments in the operatic world, adding that if stress is put on directors, opera would be a disaster.

“Directors are ‘terrorists’ of the opera world. Opera is drama and music in which music translates everything that happens and every single character, including those killed and those unborn. It is not necessary to add anything [to the music]. Directors sometimes claim they want to create something new; but if they really want to create something new they should write their own operas and not distort Verdi. Otherwise they should better go hunting or fishing,” Santi opined.

“A good conductor does not have to be a dictator obeyed by all; rather, together the musicians, soloists, choir singers and conductor should interpret the music. They should all serve the composer, who is the boss and who composed the music. If they do not identify with this perception, they should stop performing,” commented Santi.

He also hailed conductor Dimitri Mitropoulos, calling him a genius but adding that in general it is hard to learn from a genius and that is why Toscanini was better in terms of teaching others.

When asked if he knew that he physically resembled film director Alfred Hitchcock the witty conductor said he was aware of the likeness but that this was just his current form. In his thinner years, he said he was told he resembled the famed French comic Fernandel.

Dvorský hinted that if everything goes right and Santi is still in good form, the SND will prepare a programme for next year to bring the maestro back to Slovakia.