THERE were no shockwaves in the Slovak political arena when former prime minister Iveta Radičová delivered her letter of resignation to the central office of her party, the Slovak Democratic and Christian Union (SDKÚ) on May 3. Radičová had announced her intention to quit politics shortly after the fall of her centre-right government last October. 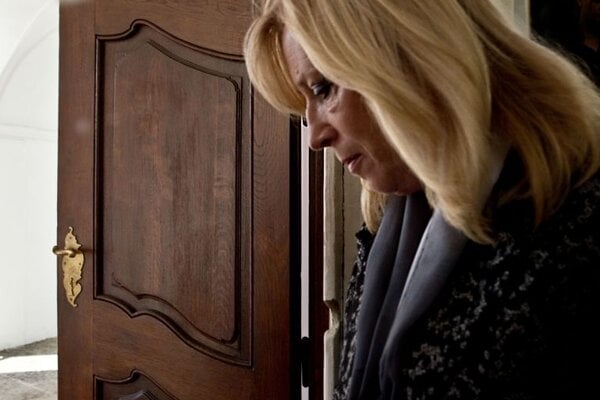 THERE were no shockwaves in the Slovak political arena when former prime minister Iveta Radičová delivered her letter of resignation to the central office of her party, the Slovak Democratic and Christian Union (SDKÚ) on May 3. Radičová had announced her intention to quit politics shortly after the fall of her centre-right government last October.

“I announced after the fall of the government that I am done with politics and this statement is valid,” Radičová, who is now returning to academia, told the Sme.sk website.

Perhaps the only unexpected aspect of her move was its timing: Radičová, one of the most popular personalities in the SDKÚ, resigned two weeks before the party’s major congress at which her official departure had been expected. Delegates to the congress, scheduled for May 19, will elect a new party leader. Former justice minister Lucia Žitňanská, Pavol Frešo, president of the Bratislava Self-Governing Region, and MP Viliam Novotný, who has the backing of the party’s Košice branch, are the three candidates. Radičová has not endorsed any of the candidates.

While Radičová says she is quitting politics for good, speculation about her making a bid for the country’s presidency in 2014 have been flying around.

But political scientist Grigorij Mesežnikov, the president of the Institute for Public Affairs (IVO) think tank, says he does not think that the nation will see her re-enter party politics.

Last October, Radičová commented that “I think I no longer have the right to compete for the trust of citizens in elections”.

“For now it seems that this is a definite decision, but we will see how it will be over the next couple of years,” Mesežnikov told The Slovak Spectator, adding that her move was not unexpected at all, but rather a logical outcome of events over the past two years such as the failure to maintain the ruling coalition in power, the collapse of her government, as well as the internal situation within the SDKÚ.

Yet Juraj Marušiak of the Institute of Political Sciences at the Slovak Academy of Sciences (SAV) notes that this is not the “first definite departure of Radičová” from politics and he suggested no conclusions should be drawn yet about the finality of her move.

Radičová’s former party colleagues expressed regret over her decision: “We felt sorry and we, as well as me personally, are sorry but it is her free decision,” commented Žitňanská, as quoted by Sme.sk. Frešo spoke in a similar vein, suggesting that Radičová had thoroughly considered her decision and that he did not think she could have been persuaded otherwise.

“She was a benefit to the SDKÚ but their ways parted and now the party has to make it on its own,” Frešo commented, as quoted by Sme.sk.

Mesežnikov does not think that Radičová’s departure at this point will significantly affect the SDKÚ, as the major effect was felt after she chose not to run in the parliamentary elections. He nevertheless believes that Radičová will still influence public discourse, and in fact sees scope for her to have a deeper impact.

“She has the preconditions to influence the public discourse more significantly than many other politicians due to her qualifications,” said Mesežnikov, noting that she is an academic, an expert, and a sort of public intellectual. But he predicted that her influence would not be exerted at a party level.

Unlike Mesežnikov, Marušiak does not rule out Radičová’s return to politics, either within a party or as a candidate for the presidency, suggesting that “after all, even if she is denying the first possibility, she has not yet excluded or rejected the second”.

As for the effect that Radičová’s departure will have on the SDKÚ, Marušiak said that the party is losing a charismatic leader to whom a large number of supporters were attached. He said it was precisely those people that voted for the SDKÚ in 2010 because of Radičová who in 2012 did not vote for the party.

Marušiak believes that Radičová will have the opportunity to influence politics while adding that “she will not necessarily remain in the position of an observer” and that another possibility for her to make an impact is in the non-governmental sector, which could later create a runway for her return to politics, for example via the presidential election.

“However, it is questionable how many departures and returns voters are willing to accept,” Marušiak said.

When talking about her contribution to Slovak society, Marušiak said that Radičová “at least for a brief time returned to people their ideals and the hope that politics can be done in an honest way. At a verbal level at least, she expressed an effort to resist the partocratic system and pressures within her own party”.

As for the qualities that Radičová brought to politics, Mesežnikov noted her efforts to achieve greater transparency, and said she is a person with a high level of internal integrity and “is beyond any suspicions about linking her personal, economic or other interests with the position she held”.

According to Marušiak, her greatest success was to require all state institutions to publish contracts online. Marušiak said that she failed “as a manager of the government and an organiser” and that “if she herself wanted to operate as politician of consensus, then she was not even able to create sufficient consensus to keep her own government together and secure a majority in parliament”.

Mesežnikov noted that Radičová’s personal aversion to party politics also affected her relationships with her own party. Mesežnikov added that Radičová should not have linked the vote over the bailout mechanism with a vote of confidence in the government, though he added that other factors influenced the course of those events.