EVEN though David did not beat Goliath, the Slovak underdog was the unexpected surprise of the whole IIHF Ice Hockey World Championship, which took place in Finland and Sweden between May 4 and 20. Although Slovakia’s national team was not favoured at the beginning, it greatly surpassed the expectations of both fans and experts when it played for the gold. 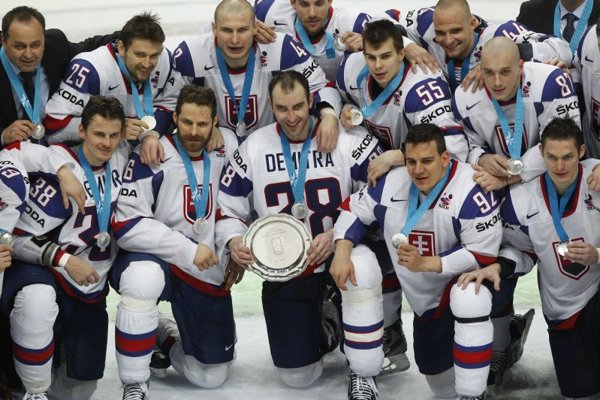 EVEN though David did not beat Goliath, the Slovak underdog was the unexpected surprise of the whole IIHF Ice Hockey World Championship, which took place in Finland and Sweden between May 4 and 20. Although Slovakia’s national team was not favoured at the beginning, it greatly surpassed the expectations of both fans and experts when it played for the gold.

“If someone told me after seven losses in the final pre-tournament phase that we will bring the medal from Helsinki, I would proclaim him a lunatic,” said Vladimír Vůjtek, the Slovak team coach, as quoted by the Sme daily.

Despite the absence of several ice-hockey stars who had played for the national team in previous years, Slovakia succeeded in winning the medal for the first time since its bronze medal win, also in Helsinki, in 2003. The team’s relatively young players disproved doubts about the future of Slovak ice hockey by beating much stronger and more seasoned opponents.

“It’s a big day for Slovak hockey, and we can be proud,” said forward Mário Blizňák, as quoted by IIHF official report. “Without big stars we showed heart, so the future looks good.”

Yet, the beginning of the championship did not look promising for Slovakia when it was defeated by Canada and Finland during the tournaments of the preliminary round. Slovaks returned to the game after they defeated their other rivals in the H Group: the US, Kazakhstan, Belarus, Switzerland and France.

Slovakia overcame expectations when it defeated then leader of the championship’s rankings, Canada, in the quarterfinals and the Czech team in the semi-finals.

Slovakia’s winning line was cut in the final match with Russia, who defeated Slovakia 6-2. While the first period started positively for Slovakia when it took the lead early in the game, Russia levelled the score midway through the period.

During the second period Slovaks were unable to withstand their opponents’ offensive pressure and conceded three goals within a span of nine minutes.

Early in the third period, Russia scored its fifth goal, which effectively put an end to hope of a comeback.

“We were disappointed to lose the game, but not in how we finished the tournament,” said the captain of Slovakia’s team, Zdeno Chára, as quoted by the IIHF official website. “It is a privilege to play in the final and I tried to tell the guys to enjoy the moment. You never know when you get a chance to do that again.”

During the silver medal presentation, Chára donned a special jersey that bore the name Demitra and the number 38, worn by Pavol Demitra, the great Slovak forward who captained the national team in 2011 in Bratislava, and who passed away last September in the tragic Lokomotiv Yaroslavl plane crash.

Slovakia’s team entered the championship with two goals, which they accomplished with their victory over France: to reach the quarterfinals and win a berth at the 2014 Winter Olympic Games held in Sochi, Russia.

In addition to this, Slovakia achieved several other small victories during the tournament. Ján Laco was awarded the best goalkeeper of the championship in save percentage with 93.55 percent prior to the gold medal game, coming in close behind Russia’s Semyon Varlamov, who gained 93.99 percent, while Zdeno Chára became the top defenceman.

Both men also joined the All-Star Team selected by media vote, along with Yevgeni Malkin from Russia, Patrick Thoresen from Norway and Henrik Zetterberg from Sweden as forwarders, and Ilya Nikulin from Russia as second defender, the official website of IIHF Ice Hockey World Championship reported.

Moreover, forward Miroslav Šatan, a member of Bratislava’s Slovan team, became the first Slovak player to win four IIHF World Championship medals: gold from 2002, silver from 2000 and 2012, and bronze from 2003.

Fans at the Hartwall Arena in Helsinki, as well as thousands of people in streets and pubs, supported Slovakia’s national team during the championship. In Bratislava, large screens were set up in Hviezdoslavovo Square and on the grounds of Eurovea shopping centre so that fans could gather for open-air viewings of the match against Russia. An estimated 10,000 people attended the screenings, the TASR newswire reported.

Similar large-scale public viewings of the game were organised in Košice and Banská Bystrica.

On Monday, May 21 crowds were allowed to greet the players as they arrived at Bratislava’s airport at 13:30. The silver-medal winners then paraded through the city before arriving at SNP Square at 15:45, TASR wrote.