The First Slovak Literary Gymnasium in Revúca, which continues the tradition of the first Slovak gymnasium (secondary grammar school) in the municipality then called Veľká Revúca, celebrated its 150th anniversary in mid-September, the SITA newswire wrote. 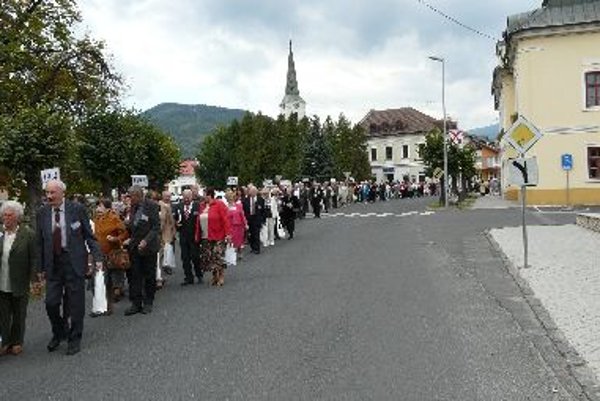 The First Slovak Literary Gymnasium in Revúca, which continues the tradition of the first Slovak gymnasium (secondary grammar school) in the municipality then called Veľká Revúca, celebrated its 150th anniversary in mid-September, the SITA newswire wrote.

It was established during the period of national revival on September 16, 1862, as the Slovak Evangelical [of the Augsburg confession] Patronal Gymnasium. The school was the outcome of a meeting betweem Gemer and Malohont regions’ national revivalists at a mourning feast honouring the late Pavol Jozef Šafárik, poet, historian, ethnographer, university professor, and founder of Slavic studies. The school could only operate thanks to donors. It was managed by a patronal committee led by a series of Slovak activists: Štefan Marko Daxner, then Ján Francisci, then Daxner again. The school administrators were August Horislav Škultéty, Rudolf Homola, Samuel Ormis and Karol Viest. At first, lessons took place in Latinák’s rented house, which the gymnasium later bought.

But, as the school developed, it needed more space and so the construction of a new building began in 1871. It was opened in 1873 but not for long: in 1874, Hungarian authorities closed the school, along with the two other purely Slovak gymnasiums – the Evangelical one in Martin and the Catholic one in Kláštor pod Znievom. In the first twelve years of the Revúca gymnasium’s existence, more than 560 students graduated from it, including the famous writer Matej Bencúr aka Martin Kukučín. It was reopened only much later.

At the September 14 celebration, students from all classes since the first final exams in 1950 gathered, including the first 8 post-World War II graduates who left the school in 1949. The oldest graduates were not able to walk in the ceremonial march through the town of Revúca, current headmaster Igor Baran told the TASR newswire, but they called their class teacher who is still alive. “Maybe the strongest reactions were stirred in the procession by the class which graduated in 1962 and which thus celebrates the 50th anniversary since their secondary-school studies,” Baran said.

The school, which currently bears the name Gymnasiun of Martin Kukučín, was restored as a secondary grammar school specialising in literature, arts, and humanistic sciences and is currently the only school with such specialisation in the whole of Slovakia. Thus, Education Minister Dušan Čaplovič, who attended the celebrations, said, as quoted by SITA, that the school should be considered a national treasure and preserved for future generations, regardless of its quota and number of students – which are the main criteria used for the ministry’s decision-making.