IT TOOK more than 15 years for the show of preserved corpses to make it to Slovakia after having provoked much controversy around the world. The exhibition arrived in Bratislava this year for the first time, and has stirred the same discussion that has emerged elsewhere: human rights activists question the provenance of the bodies, while the Roman Catholic Church calls it an attack on human dignity. 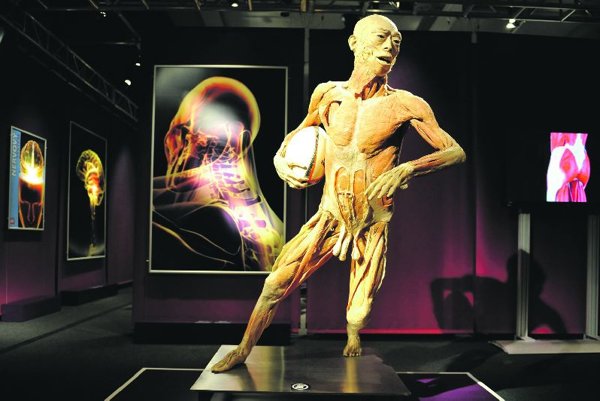 IT TOOK more than 15 years for the show of preserved corpses to make it to Slovakia after having provoked much controversy around the world. The exhibition arrived in Bratislava this year for the first time, and has stirred the same discussion that has emerged elsewhere: human rights activists question the provenance of the bodies, while the Roman Catholic Church calls it an attack on human dignity.

The show, on display in Bratislava’s Incheba since late August and scheduled to last until mid-December (after the organisers extended it due to high interest among the Slovak audience), features corpses preserved using plastination, a method invented by German anatomist Gunther von Hagens. Plastination is a unique technique of tissue preservation developed by von Hagens in Heidelberg, Germany in 1978. According to the International Society for Plastination, it is a process in which “water and lipids in biological tissues are replaced by curable polymers (silicone, epoxy, polyester) which are subsequently hardened, resulting in dry, odourless and durable specimens”.

The origin of the bodies on display has provoked controversy at similar shows elsewhere, and some Slovak human rights activists have expressed concerns about this too.

On October 9, 2012 (more than a month after the exhibition began), a group of activists, including Marek Tatarko from the Slovak Association of Falun Gong, officially called on the organisers of the show to declare the provenance of the bodies on display in Incheba and prove that the donors’ approved of their bodies being used in this way.

“We want to ensure that basic ethical principles and human rights, which are at the core of our free and democratic society, are observed,” the activists wrote, arguing that there are “serious doubts about the provenance of the bodies”.

“The displayed bodies might belong to vulnerable groups in China – dissidents, political prisoners, and Falun Gong practitioners,” the activists wrote, basing their claims on reports from France, Israel, and the US, where similar exhibitions also faced controversy.

The website of The Human Body claims that all exhibits were legally donated through an organised governmental process.

The activists are requesting that the organisers publish the details about this organised governmental process.

While the identity and the age of the displayed bodies are unknown, all of them died naturally. Once the exhibitions are over (in three years’ time) all the exhibits will be cremated and buried properly, according to Štěpán Janeček, the business director of JVS Group, the organiser of the exhibition.

“We are ready to cooperate with all official bodies that the exhibition concerns,” Janeček told The Slovak Spectator. “We are able to prove the legality of the exhibition and I confirm that we are not violating any law or measure that should result in cancellation of the exhibition.”

The show’s organisers, however, have not responded to the demands of the human rights activists, according to one of the signatories of the call, Ondrej Dostál from the M. R. Štefánik Conservative Institute.

“They had promised to document the origin of the bodies to the media, but so far haven’t done so,” Dostál told The Slovak Spectator.

Similar exhibitions have been cancelled previously elsewhere. In September 2010 France became the first country to ban the ‘Our Body: The Universe Within’ exhibition with the ruling of the highest court after two human rights organisations said they suspected the bodies “probably belonged to former Chinese death row inmates, around 6,000 of whom are killed each year”, the France24 news website reported, adding that the local French organiser of the exhibition was unable to prove that the bodies had not been procured from prisons.

The first major exhibition of human bodies by von Hagens, entitled Body Worlds, went on display in Tokyo in 1995. Von Hagens claimed all the displayed bodies in his exhibitions came from “fully informed European and American donors who gave permission in writing for their bodies to be displayed”, America’s National Public Radio (NPR) reported in 2006. Its main competitor, BODIES…. The Exhibition, opened in Tampa, Florida, in 2005. Its organisers said their cadavers were all unclaimed bodies from China, according to NPR.

Organisers of The Human Body in Slovakia, however, rejected comparisons with von Hagens’ Body Worlds, which Janeček said “rather than educating, aims to shock [audiences]”.

“Yes, it’s also about bodies preserved with the method of plastination, but that’s the only thing they have in common,” he told The Slovak Spectator, explaining that The Human Body is primarily educational, which is proven by the thematic structure of the exhibit, which is grouped according to each system of the human body.

In any case, representatives of the Roman Catholic Church are trying to discourage its members from visiting the exhibition, even if the purpose is strictly educational, and warns mainly of allowing minors to view the exhibits.

The Human Body Exhibition is a “defamation of dead human bodies exhibited with the aim of profit, and in a way disparages human dignity”, the head of the subcommission for bioethics of the Conference of Bishops of Slovakia (KBS), Štefan Sečka, wrote in a statement on the exhibition dated October 8 which he said had been drafted “due to the numerous questions and doubts of believers” provoked by the exhibition.

The exhibition seriously violates the basic moral principles and values of a free, democratic society, according to the bishop. In his statement he called on the respective state and local bodies to use their powers and cancel the visit immediately. In the meantime, he asked Christians not to visit the exhibition and to discourage children and young people from visiting it.

The exhibition’s organisers have responded to this criticism by maintaining that the exhibition is neither disrespectful nor unethical.

“On the contrary, the exhibition is strictly educational and provides knowledge,” Janeček told The Slovak Spectator.

Janeček said that the representatives of the Roman-Catholic Church have criticised the exhibition without having visited it or without having contacted the organisers. He alleged that the critical stance of the bishops was influenced by an activist movement, “or rather a sect that […] has created a myth about the exhibition that is not true”. However, he refused to name the movement.

Meanwhile, a lawyer acting for the KBS has been in touch with local and state bodies concerned with the exhibition, including the Regional Public Health Office in Bratislava, requesting that they investigate whether the exhibition violates the law on burial, which requires human remains to be handled with respect and in such way as to not threaten public health or public order, the Sme daily reported.