MANY COUNTRIES have taken heed of the lessons learned when, in March 2011, Japan’s Fukushima nuclear power plant experienced multiple meltdowns in the aftermath of an earthquake and tsunami, and Slovakia is no exception. After carrying out stress tests on nuclear power plants that are in operation as well as under construction, Slovakia produced the National Action Plan regarding steps taken to comply with the conclusions of the stress tests. Slovakia’s Nuclear Regulatory Authority (ÚJD) sent the plan to the European Nuclear Safety Regulators’ Group (ENSREG) in early January. 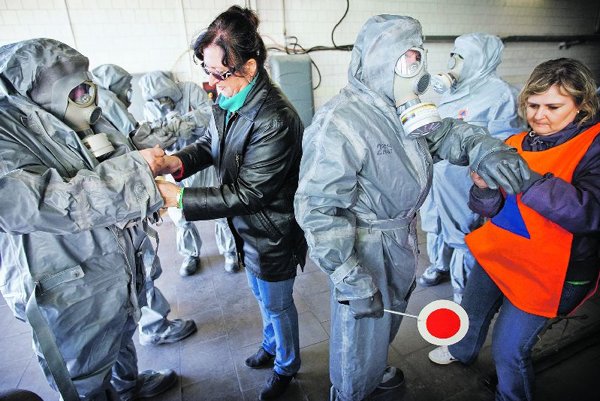 The Havran drill took place in and around Jaslovské Bohunice on October 17 and 18. (Source: SME)
Font size:A-|A+

MANY COUNTRIES have taken heed of the lessons learned when, in March 2011, Japan’s Fukushima nuclear power plant experienced multiple meltdowns in the aftermath of an earthquake and tsunami, and Slovakia is no exception. After carrying out stress tests on nuclear power plants that are in operation as well as under construction, Slovakia produced the National Action Plan regarding steps taken to comply with the conclusions of the stress tests. Slovakia’s Nuclear Regulatory Authority (ÚJD) sent the plan to the European Nuclear Safety Regulators’ Group (ENSREG) in early January.

“The stress tests were carried out on a volunteer basis, so if we do not meet any obligations [i.e. submitting the action plan], we are not threatened by disciplinary action,” Marta Žiaková, chair of the ÚJD, told The Slovak Spectator on January 8, adding that by submitting the action plan Slovakia has proven its commitment to nuclear safety. “We want to demonstrate that we are fulfilling our nuclear safety commitments. ... This involves cooperation between the operator [of the nuclear power stations], the regulatory authority, international organisations as well as individual countries, because it has been shown that a nuclear accident knows no borders.”

The national action plan contains proposed measures and improvements based on what occurred at Fukushima and recommendations resulting from stress tests and subsequent peer reviews, which will be carried out at both the Jaslovsk￩ Bohunice and Mochovce sites, i.e. the nuclear power stations that are in operation as well as under construction.

The stress tests were described as a targeted review of the safety margins of nuclear power plants relating to extreme natural disasters that would threaten the safety of the plants. According to the ￚJD, the results were positive for the nuclear power stations in the event of a complete loss of electrical power and loss of ultimate heat sink caused especially by earthquakes or floods. Despite this, measures will be carried out to further increase the level of nuclear safety.

Slovakia currently operates two nuclear power stations with a total of four reactors in operation: the V2 in Jaslovsk￩ Bohunice (two blocks) and the nuclear power station in Mochovce, of which two reactors are in operation and another two blocks are under construction. Its operator, Slovensk￩ Elektr￡rne, attributes the delay in their completion and rising bills to stress tests and additional improvements.

She believes that realisation of the measures would not require any so-far unplanned interruption in the operation of the nuclear power stations and that they will be carried out either during operation of the plants, or during their planned overhauls and refuelling procedures.

Some recommendations by ENSREG, the main coordinator of the stress tests, consisting of representatives of 27 EU member countries, link up to the already ongoing implementation of the severe accident management project ordered by the ￚJD for Slovensk￩ Elektr￡rne. This is based on periodic security checks which took place in 2008, before the Fukushima disaster, at the V2 nuclear power station in Jaslovsk￩ Bohunice, and in 2011 for the first two blocks of the Mochovce nuclear power station.

"The project solves key problems like the installation of hydrogen recombiners, the external cooling of the reactor's pressure vessel and the installation of an emergency source of coolant," said ﾎiakov￡, adding that after the stress tests the project was extended to improve severe accident management also in the case of an event that would affect all the units in the locality concurrently.

Other recommendations were related to securing the nuclear power stations against extreme external risks, like external floods and earthquakes, which could result in the inability of safety systems to perform their safety functions.

The seismic resistance of the V2 nuclear power plant in Bohunice was upgraded as part of a complex modernisation project completed in 2008.

Peter Uhrík,, the general director of the department of safety evaluation and inspection at ￚJD, explained that at the V2 in Bohunice, the initial design basis value of horizontal acceleration at ground level (PGA) 0.025g was increased to the current value of PGA of 0.34g, adding that he does not know of any other nuclear power station in Europe with a higher degree of seismic resistance.

The value of upgrading the seismic resistance is adapted to the specific site and for Mochovce the new value of seismic hazard PGA was calculated at 0.15g. In the case of the first two blocks at Mochovce, the seismic resistance will be gradually upgraded with a deadline set for the end of December 2018, while in case of the second set of blocks at Mochovce, which are currently under construction, this upgrade is already part of the project of their completion.

Uhrík, specified that increasing the seismic resistance of buildings, structures and equipment involves the installation of metal support structures, absorbers and securing all items in rooms containing diesel generators, as during an earthquake loose or shifting items could potentially cause damage. This means, for example, securing tables to the floor and securing computers to tables.

With regards to extreme external threats like an aeroplane crashing into the plants, ﾎiakov￡ specified that based on the recommendations of the European Commission regarding the Mochovce site, the plant should be able to withstand a crash from a small aeroplane, and that it already meets this criteria.

"With regards to a big aeroplane, the emphasis is on preventing such an event," said ﾎiakov￡.