AFTER a long break, the Japanese dance form butoh has again returned to Bratislava – this time in the form of a one-woman-show by Sumako Koseki, a Japanese dancer living in France. She performed ‘Gold and Powder’ at the elledanse theatre on February 10. 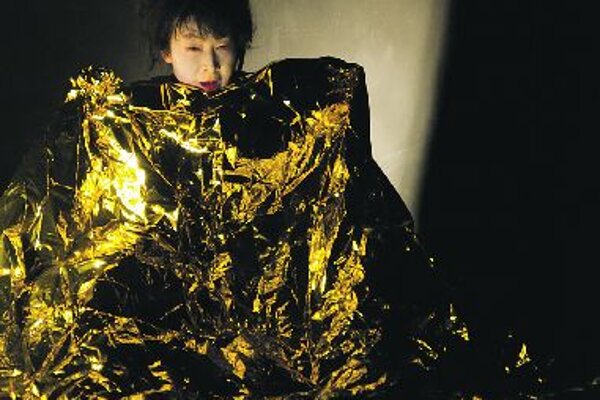 AFTER a long break, the Japanese dance form butoh has again returned to Bratislava – this time in the form of a one-woman-show by Sumako Koseki, a Japanese dancer living in France. She performed ‘Gold and Powder’ at the elledanse theatre on February 10.

“As far as butoh is concerned, there has been a lot of misunderstanding – butoh is often thought of as a dance of ghosts, something terrifying,” Koseki said, as quoted in a press release. “But butoh is about the search for light in the darkness; the point is you can see light more clearly in the darkness. And this is the reason for the creation of the performance Gold and Powder.”

Ko Murobushi, hailed as the inheritor of butoh’s founder’s original perception of the dance, said – during a stay in Slovakia in 2011 – that this style of dance can be taken as physical theatre or as a way of expressing oneself, rather than as classical dance. It is even hard to define butoh and pinpoint what it is and is not, so much is the style about freedom and expression from within towards the outside world.

Describing the roots of butoh, Koseki told The Slovak Spectator: “In Japan, there was a very specific situation. Artists were against classical theatre, because it was completely privatised by several families. But Hijikata, the founder, was still inspired by the traditional ‘kabuki’ theatre – by kabuki as the real essence of the Japanese people, as the ritual of the village. So there are two types of tradition – the formal one (kabuki) and the ‘real’ one, butoh. I mostly draw inspiration from bungaku which is marionette theatre. For me it is very connected with butoh, as we perceive the marionette’s body as the ideal body,” she concluded.

The current piece by Koseki is a combination of opposites, of European and Japanese classical music, of old Samurai style and modern dance, of vanity as expressed by the ‘gold’ and futility as represented by the ‘dust’ that is used very profoundly onstage.

“When I was young, I was doing theatre in Japan with Suzuki Tadashi, who is a very well-known theatre personality, who made physical theatre,” Koseki said about her professional origins. “I began with him, and later I grew more and more interested in physical work.”

Asked about the reactions of European audiences to her unique style, Koseki praised the fact that they do not have a classical Japanese background – and explained that she does not actually want them to have any reference point, just to receive her dance like children do, spontaneously. Asked about Japanese audiences and local feedback, she said: “Sometimes it’s good, and sometimes it’s very strange – because Japanese people are not looking [at] Japan [like] me. Living abroad, I miss Japan very much, but Japanese who live there are rather admiring of America or Europe. This is the point of the founders and early proponents of butoh: Japan is losing Japan. That is also the point of butoh. Butoh tries to look for the Japan that doesn’t exist any more,” Koseki concluded.