Protests against uranium mining go on

OVER the past few years the eyes of foreign companies have been focused on the mineral wealth of Slovakia. As well as deposits of precious metals, there are several sites rich in ores used by industry, including the energy sector. A recent finding by European Uranium Resources, a Canadian company, indicates that Slovakia may be sitting on one of the most important uranium deposits in the world. 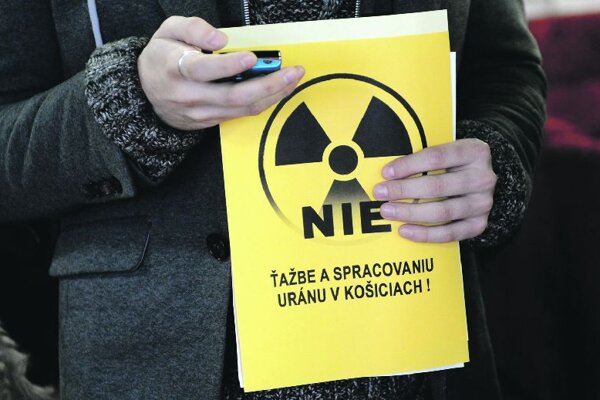 OVER the past few years the eyes of foreign companies have been focused on the mineral wealth of Slovakia. As well as deposits of precious metals, there are several sites rich in ores used by industry, including the energy sector. A recent finding by European Uranium Resources, a Canadian company, indicates that Slovakia may be sitting on one of the most important uranium deposits in the world.

According to representatives of the firm, the Kurišková area near Košice, in eastern Slovakia, contains about 5.5 million tonnes of an ore which is rich in uranium and molybdenum. This amount would help the country, which is the world’s third largest per-capita user of uranium-fuelled nuclear energy, to secure its own supplies of nuclear fuel for 30 years, the Canadian firm states on its website.

But while the company talks about the chance of increasing the energy security of Slovakia and creating new jobs in the eastern part of the country, environmentalists are warning of the risks that mining uranium might bring.

The Slovak Economy Ministry under Minister Tomáš Malatinský signed a memorandum of understanding with representatives of European Uranium Resources in mid December last year. According to the website of the Canadian company, the document, among other things, defines the parameters by which both sides will cooperate in advancing the Kurišková uranium deposit, for which the company holds the exploration licence, through ongoing feasibility and environmental studies.

Economy Ministry spokesperson Stanislav Jurikovič said that the memorandum was signed in order to gain control of a “strategic deposit of uranium ore”.

“The memorandum of understanding is a form of guarantee that important decisions regarding the future of the deposit of uranium ore will not be made without fully informing and regularly communicating with the Economy Ministry,” Jurikovič told The Slovak Spectator.

He added that thanks to the memorandum Slovakia will receive detailed information about every phase of the Kurišková project. Moreover, Jurikovič said, if the project proved economically and ecologically realisable, Slovakia would not only receive taxes and fees from the mining, but also derive other benefits relating to the project.

“The current legislation does not give the state enough possibilities to directly influence such type of projects,” Jurikovič added.

Dorian L. Nicol, president and CEO of European Uranium Resources, called the signing of the memorandum with the ministry “a significant milestone in our advancement of the Kurišková project”.

“We are confident that our ongoing feasibility study and environmental impact assessment will demonstrate that the project can be permitted and developed in a sustainable way for the benefit of Slovakia’s energy security and the economy of the Košice Region in eastern Slovakia,” Nicol said, as quoted in the press release, adding that the company would continue “to advance the project in a way that aligns the interests of the company’s shareholders with those of the Slovak Republic and of eastern Slovakia”.
But not everybody has welcomed the memorandum, not least because the Economy Ministry did not publish the document’s text on its website. Juraj Rizman, head of Greenpeace Slovensko, believes that if the results of a feasibility study (which is currently under way) or an independent study of the impacts of the proposed mining on the environment are not published, then state institutions should not express their support for the projects being discussed. He also criticised the ministry’s claim that it wanted better control over the project, as well as to secure benefits for the state.

“We regard the whole memorandum as part of the PR for the project and the company which wants to realise it,” Rizman told The Slovak Spectator.

In addition to this, Rizman stressed that Greenpeace Slovensko is convinced that the risks accompanying uranium mining and the effects on people, the environment, as well as on the public finances, will significantly exceed the benefits for the state.

“We are also convinced that we should not risk people’s health, the quality of sources of drinking water, agricultural land or the richness of Slovak nature for the probable gain of foreign investors,” Rizman said.

When it comes to the potential risks that uranium mining might bring, Rizman pointed to what he said was possible damage to the system of groundwater as well as possible contamination of other water in the area. He explained that the potential mining site is located near three important regional water sources: the Čermeľ Stream, and the Bukovec and Ružín reservoirs.

“The possible threat to these water reservoirs in the area of eastern Slovakia, which also today has serious problems with water, is […] one of the most substantial environmental questions which the authorising authorities will have to consider,” Rizman added.

Ladislav Rovinský, from the Association to Support the Beautification of Košice, said that one of the risks that would accompany mining is contamination of water and soil.

“None of the mines, even with the latest technology, is ecological,” Rovinský told The Slovak Spectator.

Rovinský explained that every mine has to have a drainage tunnel, a ventilation shaft and escape tunnels, all of them leading to the surface, which represent routes for possible contamination. Moreover, he warned against the high amounts of radioactive radon gas in the area, which might endanger not only residences within the municipalities that neighbour the Kuríšková site, but also near

Maroš Stano, spokesperson for the Environment Ministry, told The Slovak Spectator that it would strictly evaluate the influence of the whole Kuríšková project on the environment, including the effect on the water reservoirs and bird territories.

“If the project seriously harms the environment, the ministry will not agree to the project and will not recommend it,” Stano said.

About 50 people showed their disagreement with the planned uranium mining at a protest held on February 11 in front of Košice’s town hall. The event took place on the same day as the first official session of the city council.

Rovinský, who was one of the organisers of the protest, along with other activists, handed out leaflets appealing to local councillors to address the situation. They also pointed to the fact that the Economy Ministry and the mining company had signed their memorandum of understanding “without even discussing the issue in government, and without informing the local authorities about the mining [project], despite the fact that Košice’s local council had rejected mining [before]”, the TASR newswire wrote.

Rovinský told TASR that the people of Košice disagree with uranium mining.

“The investor will always declare that the risks are minimal, but experience from around the world tells a different story,” he stressed.

Though councillors included a discussion about the possible mining in their session, none of the activists stayed to tell them about their objections, city spokesperson Martina Viktorínová told The Slovak Spectator.

Viktorínová added that at the moment the town is not part of the official negotiations about launching mining in the area. However, if representatives of Košice are invited to join the discussion they will “take the will of citizens into account”, she said.

She also stressed that at the moment the town respects the resolution which the city council accepted a few years ago after several people and activists signed a petition against mining in the area.

“We respect [the fact] that the resolution, with which the inhabitants of Košice expressed their disagreement with uranium mining in Jahodná [a recreational area near Kurišková], is still valid,” Viktorínová added.

The discussion over launching uranium mining near Košice is not the first to have occurred in Slovakia. In the past few years several companies, mostly from Canada and Australia, have come to Slovakia to conduct feasibility studies in various regions, including Nové Mesto nad Váhom district, Detva district and Košice.

In September 2009 representatives of four environmental NGOs, Greenpeace Slovensko, Priatelia Zeme – SPZ, OZ Sosna and OZ Brečtan, submitted a petition signed by 113,488 people to parliament. They wanted MPs to discuss mining projects in Slovakia and their impact. Moreover, they proposed several legislative changes to protect the interests of municipalities that might be affected by mining, including extending the opportunity for people to get information about geological surveys, according to a Greenpeace press release from September 2009.

The petition led to significant changes to the law on geological surveys and mining and, as a result, the public, municipalities as well as self-governing regions now play a crucial role in the process of decision-making over launching uranium mining, Rizman told The Slovak Spectator.

He also stressed that the petition was, and still is, “the biggest environmentally focused petition in the history of Slovakia”.

“It was also the first successful case when Slovak environmental organisations, through the petition, managed to push through an issue regarding protection of the environment to parliamentary discussion and subsequently achieve a specific change of legislation in favour of environmental protection,” Rizman added.