ONE MIGHT not expect electric guitars and rock and roll drums to pair well with the Tuareg language of Tamasheq, and its traditional rhythms and sounds, but on February 13 at the KC Dunaj in Bratislava, visitors were able to witness Mali’s Tamikrest deliver a seamless fusion of their traditional Tuareg music and language with modern instruments and influences. 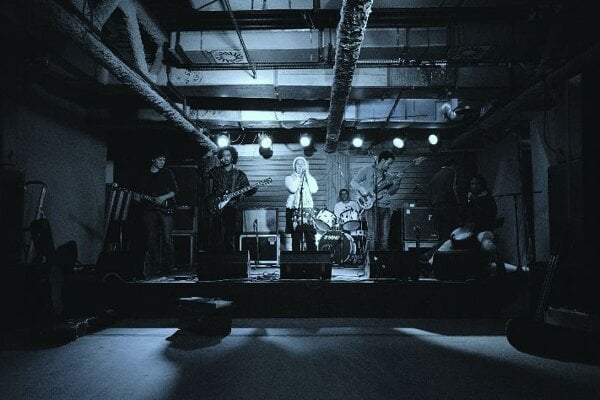 ONE MIGHT not expect electric guitars and rock and roll drums to pair well with the Tuareg language of Tamasheq, and its traditional rhythms and sounds, but on February 13 at the KC Dunaj in Bratislava, visitors were able to witness Mali’s Tamikrest deliver a seamless fusion of their traditional Tuareg music and language with modern instruments and influences.

When asked by The Slovak Spectator whether their cause – the fight for independence for the Tuareg people and support for their heritage and culture – might be spread more easily if sung in French or English, the band leader Ousmane Ag Mossa answered: “Perhaps you are right, but we want to sing in our mother tongue, because it’s a way to keep our language, Tamasheq, alive.” The Tuareg are a nomadic people who have inhabited the Sahara for millennia, but in the post-colonial era found themselves and their traditional homeland scattered among several African countries. They are seeking to create their own state, to be called Azawad, in the north of Mali, the Sme daily reported.

The members of Tamikrest attended the Les Enfants de l’Adrar school in Tinzawaten, which was started by various European foundations. It was there that they received their musical training, and in 2004-5, Mossa founded the band with his friend Cheick Ag Tiglia.

When asked how they managed to break out of Mali’s borders, Mossa explained, “The beginnings were difficult because we managed the band ourselves. We didn’t get any help from outside - no government help for youth projects or a cultural orchestra, although we were number one among the younger generation of musicians in the region, speaking in the name of the youth.”

“We used to play at festivals around Kidal; and in 2008, we performed at the biggest festival in the desert, the Festival Au Désert,” he said, discussing the band’s rise to international fame. “We met the [Australian/ American] band Dirtmusic there, and we started a friendship with them. We played with them on the festival’s main stage. In 2009, Dirtmusic invited us to do a German tour with them and later to play on their new album. Chris Eckman of Dirtmusic proposed [that he] become our manager,” Mossa concluded.

In 2010, Eckman produced the first Tamikrest album, Adagh, and in 2011 their second album, Toumastin. In 2010, both bands toured Europe together, playing at numerous festivals, like Sziget in Budapest and Orange Blossom Special in Germany.

As for their future plans, Mossa said that after the current tour – comprising several European stops, including Finland and Greece – they will go into the studio to record their next album, and after two summer tours, they plan to return to Europe for a November/December tour accompanying the release of their third album.

The next question concerned the switch between touring – which seems to comprise most of their time – and their life back in Mali. Mossa said that it was a little difficult to remain constantly on the move, but he added that this was what the life of an artist was about – not only for them, but for all artists. “And don’t forget that moving is the life of the Tamasheq [that is what the Tuareg people call themselves], because we are nomads.”

He continued to explain that they also play back home in Kidal, Tamanrasset and other places, but that the state considers their music “revolutionary”. He added that when they play for their own people in the desert, the reactions are quite the same as in Europe. The only difference is that locals understand the Tamasheq-sung lyrics.

When Tuareg attend their concerts, they do not convey their nationalist sentiments in a strong or violent way, but rather more diplomatically. “We don’t pretend to be happy about the situation in Mali and about the fact that our land is part of Mali; but we take care about how to explain that. And when onstage, we are there essentially for the music. We want to deliver the message, but through the music,” Mossa said. “When I express myself through the music, I can also say something strong, but the response is not aggressive.”

During their Bratislava concert, Tamikrest’s attempts to make contact with the audience were limited by the formidable language barrier, but in the end they proved that music is perhaps the best way to convey their message; their performance garnered much applause, and they were called back onstage for several encores.

Their music is difficult to describe, but they say it is equally inspired by pioneering Tuareg musicians, as well as by western artists like Jimi Hendrix, Bob Marley, Pink Floyd and Mark Knopfler. Maybe it is best to simply listen to the music and try to understand the message, conveyed in a language so removed from English – and Slovak, for that matter – on an emotional level. The band appears to be growing in popularity and continually finds new fans among world music admirers.