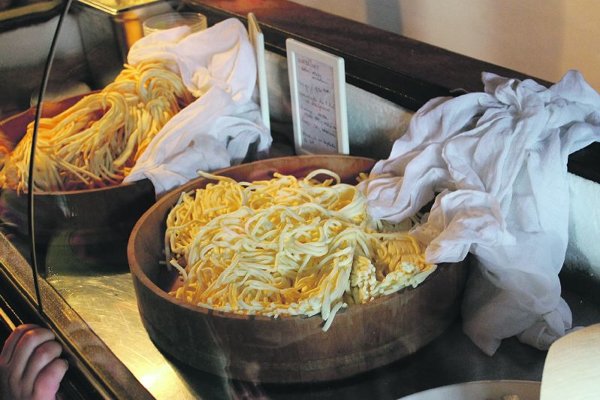 ORGANISATIONS representing the interests of farmers and food producers in Slovakia warn that the proportion of Slovak-made food products in Slovakia’s stores is rather low. When asked about the state of Slovakia’s agricultural and food industries, another organisation, the Food Chamber of Slovakia (PKS), also sees what it calls a long-term negative trend in the Slovak food industry.

It is estimated that 45-50 percent of the food products in Slovakia’s retail shops are of Slovak origin, said Stanislav Nemec, the spokesperson for the Slovak Agriculture and Food Chamber (SPPK) in reference to different surveys, adding that two decades ago, at the beginning of the transformation of the country’s agriculture, that share stood at around 80 percent. The chamber also cited other data to support its claims: in 2010 only 32.4 percent of the food products sold at retail shops in Slovakia were actually produced there.

Agriculture Minister Ľubomír Jahnátek has introduced the idea of a fund into which Slovak food producers would pay a special fee, which would then be used for the promotion of Slovak food products. Yet, critics worry that it might only represent the interest of a narrow group of producers.

“Slovak consumers, who despite declaring their interest in purchasing Slovak-made food products, significantly contribute to the drop in domestic production by shopping in retail chains with minimal representation of domestic products, and thus support the economies and employment of other countries of the union,” Daniel Poturnay, president of the PKS, said.

As for changes in the behaviour of Slovak food consumers, Nemec said that some time ago it seemed that a group of consumers had emerged in Slovakia for whom price was not the key factor when buying food, but rather its origin and quality. However, under the pressure of the economic crisis, this group has vanished, while things have returned to the ‘old ways’ when price was the key factor influencing consumer behaviour, Nemec told The Slovak Spectator.

The PKS has also suggested that for Slovak consumers the price, and not the quality of what they consume, seems to be important, suggesting that health factors should become the guiding principle for consumers. According to the PKS, Slovaks do not consume enough food from food groups that are important for maintaining a balanced diet.

Statistical data indicate that consumption of meat, potatoes, vegetables, fruit, legumes and cereals, as well as products made from them, is relatively low, according to a PKS press release published September 25, 2012. In the case of meat, Slovakia falls significantly behind other European Union countries, with its consumption having averaged 65 kilograms per inhabitant in 2009, while Germany’s inhabitants consumed 88 kilograms and Hungarians 80 kilograms, according to the Statistics Office of the Slovak Republic (ŠÚ).

However, market observers do not expect any sharp change in these trends since they assume high unemployment rates as well as stagnation or even a drop in the purchasing power of Slovakia’s population are major factors, Nemec suggested.

A brief guide to the country’s culinary traditions

Despite a decline in the amount of meat currently consumed by Slovaks, traditional Slovak cuisine relies heavily on different types of meat, which is often combined with sheep-based cheese products and potatoes, and consists of flavours found in both Hungary and Austria.

If asked to name the most typical Slovak dish, every Slovak would respond first with bryndzové halušky. The gnocchi-like dumplings made of potato dough served with bryndza, a traditional strong-flavoured Slovak sheep’s cheese, originated in the mountainous regions of northern and central Slovakia. Served in practically every restaurant that offers local cuisine, the dish is usually seasoned with fried bits of bacon or fried onions. An alternative, which is better known in several varieties as a Polish traditional dish, is bryndzové pirohy, a ravioli-like pasta with a filling made of bryndza and potatoes.

Western Slovakia, however, has its own regional speciality: roasted goose accompanied with red cabbage and lokše, a kind of dry potato pancake (resembling tortillas), smeared with goose fat (which is believed by locals to be very healthy). Lokše can also be served as a savoury main dish, filled with soft goose liver, or sweet, filled with poppyseed and jam. Goose as a regional speciality is a tradition Slovakia shares with its southern neighbour, Hungary, as is that of goulash, or guláš. Typically eaten with knedľa, a kind of sliced, boiled or steamed dumpling, guláš takes several forms: traditional, spicy maďarský (Hungarian, with beef); segedínsky (creamy, with sour cabbage and pork); or poľovnícky (with deer meat). In addition to these, there is also kotlíkový guláš, which is more like goulash soup, served with bread.

Soups – polievky – as a rule, are almost never absent from a Slovak table. The most frequently served soups are chicken bouillon (slepačí vývar), tomato (paradajková), vegetable (zeleninová) and various cream soups. Faithful to the Austrian tradition, Slovaks are very keen on fried Wiener schnitzel (vyprážaný rezeň), which is served by many as a regular Sunday or festive lunch. It usually comes with either a side of potato salad or with boiled potatoes and pickles. Grilled pork knuckle, or grilované koleno, served with bread, pickled hot peppers known as baraní roh in Slovak, horseradish and mustard, has recently become a very popular dish in Slovak restaurants and grill bars.

Vegetarians will likely find it rather difficult to enjoy Slovakia’s meat-heavy cuisine, and may find themselves opting for vyprážaný syr, or fried cheese, a typical central European dish served with French fries and tartar sauce. For pescatarians, another specialty not typically found elsewhere in the world is treska, a mayonnaise-based fish salad, available in salad bars and supermarkets.

Central European countries take pride in their tradition of sweet dishes, which are often served not only as dessert but also as main courses. Such is the case with slivkové gule, dumplings filled with plums seasoned with poppy seeds or minced walnuts, but also
crêpes or palacinky. Apart from those, Slovaks and Czechs share the tradition of buchty (buns) – both baked and steamed, and závin (similar to either a strudel or a turnover), both of which are often filled with poppy seed paste. Traditional desserts also include Austrian strudel (štrúdľa), but Bratislava is home to the regional specialty bratislavské rožky, a crescent-shaped pastry with a poppy seed or walnut filling and a glazed surface, which has received recognition under the EU’s protected geographical status scheme. Central European cities, from Vienna through Bratislava to Warsaw, are the places to go for those who enjoy creamy cakes and cookies, served to accompany afternoon coffee.

THERE are three European Union categories of geographical indication and traditional speciality known as protected designation of origin (PDO), protected geographical indication (PGI), and traditional speciality guaranteed (TSG). The aim of registering is to promote and protect the names of quality agricultural products and foodstuffs. Slovakia has so far registered products only in the TSG and PGI categories.

Skalický trdelník – a sweet pastry product originating from the town of Skalica; Slovenská parenica – a steamed, lightly smoked cheese wound into two rolls connected in an ‘S’ shape; Slovenská bryndza – a natural, white, mature, spreadable cheese, manufactured by milling a lump of matured sheep’s cheese or by milling a mixture of lump sheep’s cheese and lump cow’s cheese; Slovenský oštiepok – a half-fat, semi-hard cheese which may be steamed or unsteamed, and smoked or unsmoked; Ovčí salašnícky údený syr – this cheese is produced from fresh sheep’s milk, processed in shepherd’s huts, smoked and often formed into specific shapes; Ovčí hrudkový syr - salašnícky – this is produced from fresh sheep’s milk and derives its characteristic taste from the traditional technology used during its fermentation, and from being shaped by hand into a lump; Tekovský salámový syr – a natural semi-hard, ripened, full-fat cheese, smoked or unsmoked, formed into a cylindrical shape; Zázrivský korbáčik – a steamed cheese product, smoked or unsmoked, in the shape of a small whip (korbáčik in Slovak), originating from Zázrivá, a village in the Orava region; Oravský korbáčik – a steamed cheese product, smoked or unsmoked, in the shape of a little whip, originating from the Orava region; Liptovská saláma / Liptovský salám – a meat product with a delicate taste and an aroma imparted by the spices used and the smoking process; Lovecký salám / Lovecká saláma – a fermented meat product; Spišské párky – a wurst-like product, typically pinkish-red in colour owing to its paprika seasoning, which gives it a slightly piquant taste; Špekáčky / Špekačky – a plump wurst-like heat-processed meat product, golden-brown in colour; Bratislavský rožok / Pressburger Kipfel / Pozsonyi kifli – a sweet, crescent-shaped pastry with a poppyseed or walnut filling and a glazed surface.