ONE NEGATIVE phenomenon that has accompanied the financial crisis is that of late payment of invoices. This endangers firms, especially small and medium-sized ones, and frequently leads to their secondary insolvency or bankruptcy. Slovakia is not the only country in Europe suffering from this plight: the European Commission (EC) last October launched an information campaign to encourage speedy incorporation of the Late Payment Directive into national law. 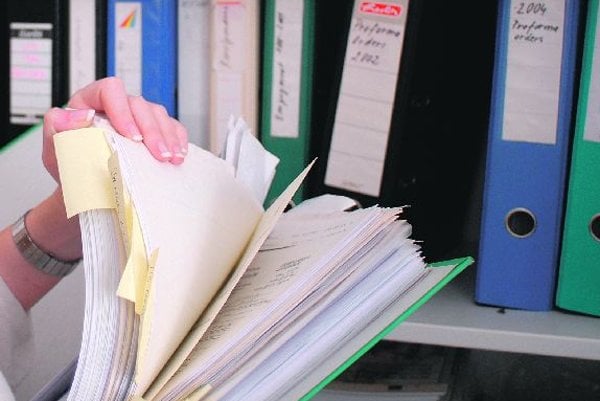 ONE NEGATIVE phenomenon that has accompanied the financial crisis is that of late payment of invoices. This endangers firms, especially small and medium-sized ones, and frequently leads to their secondary insolvency or bankruptcy. Slovakia is not the only country in Europe suffering from this plight: the European Commission (EC) last October launched an information campaign to encourage speedy incorporation of the Late Payment Directive into national law.

“Every year, thousands of small and medium-sized enterprises (SMEs) go bankrupt waiting for their invoices to be paid,” European Commission Vice President Antonio Tajani, the commissioner for industry and entrepreneurship, said on October 5, as quoted in an EC press release. “We are committed to ending the damaging culture of late payment in Europe, which has long been an issue of concern in the business world.”

Based on EC data, each year insolvencies lead to the loss of 450,000 jobs in the EU and outstanding debts of €23.6 billion. As much as 57 percent of businesses in Europe claim to have problems with liquidity due to late payments, an increase of 10 percent since 2011. Every day across Europe, dozens of SMEs go bankrupt because their invoices have not been paid. Tajani believes that implementation of the directive would provide crucial support for SMEs in the current economic crisis, during which access to credit has become difficult.

Slovakia transposed the directive into law via a revision to the Commercial Code which became valid on February 1. Based on this, enterprises should pay invoices within 60 days unless they expressly agree otherwise and it is not “grossly unfair” to the creditor. Public authorities must pay for goods and services within 30 days or, under very exceptional circumstances, within 60 days.

“The Slovak Association of Small Businesses welcomes each change leading to an improvement in payment discipline,” Vladimír Sirotka, the head of the association, told The Slovak Spectator.

According to Sirotka, the experience of accountants with members of the Slovak Association of Small Businesses (SAMP) indicates that large companies in particular are often late in settling invoices from small companies for supplies, work performed and services.

“Small businesses and micro-companies sometimes in this way end up in secondary insolvency,” said Sirotka.

“State companies and local and regional governments have their own share [of responsibility for] this too,” said Sirotka. “But it is also necessary to curb administration and make it more flexible when drawing funds from the EU.”

The SAMP does not have specific statistics about late settlement of invoices, but according to Sirotka the general increase in the financial burden on small business as a consequence of the latest government measures could also be playing a role. However, the impact can only be assessed later this year, he said.

“In effect, those who do not pay get a cheap loan and those who are waiting for their money get into problems, sometimes even existential ones,” Kičina told a discussion programme on TV news channel TA3.

Bart Waterloos, partner at accountancy, audit and tax firm VGD - AVOS in Bratislava, regards the amendment to the Commercial Code as only a first step in the right direction and says it will take time before real results can be measured.

“The revision of the Commercial Code has a double aim: shortening payment delays and introducing a better framework for late-payment interest,” Waterloos told The Slovak Spectator. “However, these will be valid only in new commercial relationships and therefore it will take a while before we can see some results from this. Furthermore, there is still the possibility to agree on a longer payment term than 60 days, as long as there is no gross disproportion in the rights between the two parties.”

Waterloos also warns that without a proper system of legal enforcement even the new rules will not help.

“Because where should entrepreneurs turn to if their contractual parties are not adhering to these new deadlines? Under the current legal system it would take years,” he said. “Furthermore, a more active fight against fraudulent bankruptcies and restructurings is also required. In this respect a substance-over-form approach should be applied, so that claims or receivables are not rejected because of some mere administrative mistakes.”

The law firm TaylorWessing e/n/w/c Advokáti also doubts whether implementation of the directive will lead to any visible improvement in payment discipline or a revitalisation of commercial relations.

“In Slovakia the basic problem is not terms of payments longer than 60 days, but that even when agreeing to a shorter term of payment the main supplier refuses to settle the invoice due to the subcontractor,” partner Radovan Pala explained to The Slovak Spectator, adding that such a supplier counts on a lengthy lawsuit and problems which the long wait for money will cause to the subcontractor, who as a consequence is often glad to receive payment before he sinks into insolvency.

Pala believes that only systematic changes to improve the enforceability of the law can improve the current situation.

According to Waterloos, other measures that would improve payment discipline in Slovakia are better and easier access to financing, such as bank overdrafts. Also, the tax office could work on returning claims faster. He says that he witnesses many VAT audits that drag on merely in order to avoid the obligation to return money to the taxable person.

“Overall a mind-shift should be realised: timely payments will make sure that my supplier has sufficient funds to pay his suppliers, employees, ... and can invest in his further development,” said Waterloos.