WHEN contemplating the most oft-uttered words in Slovakia, pothole might easily top the list these days. The winter weather has left Slovak roads pockmarked with thousands of potholes, causing damage to cars as well as municipal budgets. The Slovak government, in response to the critical situation, has allocated €16 million to patch up the potholes. 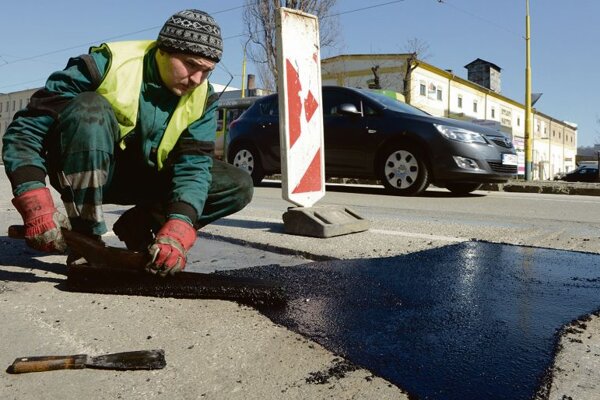 WHEN contemplating the most oft-uttered words in Slovakia, pothole might easily top the list these days. The winter weather has left Slovak roads pockmarked with thousands of potholes, causing damage to cars as well as municipal budgets. The Slovak government, in response to the critical situation, has allocated €16 million to patch up the potholes.

“We had to conclude at the cabinet session that we do not remember [a time] when winter had such a negative impact on the roads in Slovakia and when it caused such huge damage,” Prime Minister Robert Fico said at the cabinet session on March 13. “Because the situation is really unbearable and requires relatively high funds, the cabinet decided to demonstrate solidarity towards higher self-governing regions and towns and villages.”

Municipalities have acknowledged the allocation, but do not regard the sum as sufficient.
This winter has been characterised by large amounts of snow and temperatures that frequently fluctuate below and above freezing, causing water in cracks and joints to repeatedly freeze and thaw, thus creating potholes. The neglect towards road maintenance is also taking its toll. The significant increase in the number of potholes prompted municipalities to establish e-mail addresses where people can report them. Bratislava City Council receives more than 20 reports about potholes from citizens daily. By early March it had fixed over 1,000, the SITA newswire wrote.

On March 14 Bratislava City Council changed its budget and allocated an additional €1 million to repair potholes this winter.

“This problem does not occur only because of this winter,” Bratislava Mayor Milan Ftáčnik said, as quoted by the TASR newswire, adding that long-term investments in road maintenance fall below what is actually needed. The amount of money spent on maintenance in the last 10 years enables the city to repair a road once every 350 years, while a road should normally be repaired at least every 25 years.

Žilina Region has reported that 85 kilometres of its roads are in critical condition and Banská Bystrica Region re-allocated €30,000 from a feasibility study for a project to build an open-air pool with sea water, a beach and a modular roof. But other self-governing regions and municipalities have to look for additional funds to fix potholes, too.

In Slovakia administration and maintenance of roads is divided among different levels of the state, which through the National Highway Company (NDS) maintains highways, dual carriageways and first-category roads. Self-governing regions and municipalities take care of the second- and third-category roads.

Drivers whose cars were damaged by potholes can turn to road administrators for financial compensation.

The NDS, along with municipalities, confirmed the increase in potholes this winter season.

From November 2012 to the end of February 2013, the NDS repaired potholes on highways and dual carriageways covering a total of 4,122 square metres, which cost €156,642, the NDS reported on its website. Compared with the same period of the previous season, the aggregate size of potholes as well as costs to repair them has doubled. The NDS attributes the higher occurrence of potholes this winter to climatic conditions, the lifespan of the highways and dual carriageways and the strain of heavy load-bearing international transport vehicles.

NDS specified for the TA3 news channel that the average lifespan of a highway surface is 12 years. Many kilometres of highways are in operation for a longer period of time and are in need of overhauls, not just pothole repairs. Štefan Török from the NDS estimates that they would need to repair 100 kilometres of highways annually. This would cost about €9.5 million annually, a sum which is unrealistic under current budgetary restraints.

The NDS regards the current winter season as the most demanding of the last five to seven years, as by the end of February €8.5 million was spent on winter road maintenance, and the season will last until the end of March. By contrast, last season’s total maintenance costs came to €7 million, the NDS informed at a press conference on March 13.