New project for the unemployed

WITH the country’s jobless rate sneaking close to 15 percent, Slovakia’s Labour Ministry has announced yet another project to boost employment. After launching two schemes worth €70 million to help the jobless youth in November 2012, the ministry now plans to spend €15 million on finding jobs for 4,000-5,000 disadvantaged unemployed. 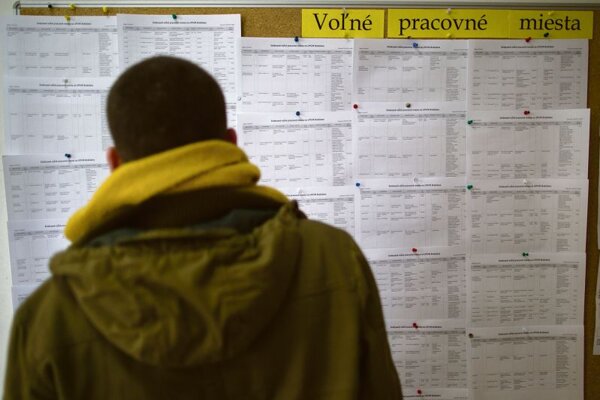 WITH the country’s jobless rate sneaking close to 15 percent, Slovakia’s Labour Ministry has announced yet another project to boost employment. After launching two schemes worth €70 million to help the jobless youth in November 2012, the ministry now plans to spend €15 million on finding jobs for 4,000-5,000 disadvantaged unemployed.

“We want to bring people who have been listed at a job centre for two years or longer back into the labour process,” said Labour Minister Ján Richter, as quoted by the TASR newswire. “It is about time for these people to return to the world of work and acquire certain work habits.”

However, analysts warned that the success of the schemes will depend on whether applicants are able to keep their jobs even after the state subsidies expire.

The number of jobless in February stood at 397,070, or 14.71 percent, which is 0.09 percentage points lower than in January. In annual terms the number of unemployed rose by 0.95 percentage points, according to the data presented by the Central Office of Labour, Social Affairs and Family (ÚPSVaR).

The highest registered unemployment rates were in Prešov Region (20.75 percent), Banská Bystrica Region (20.37 percent) and Košice Region (18.99 percent). The lowest jobless rates were in Bratislava Region (6.07 percent) and Trnava Region (10.02 percent). As for individual districts, Rimavská Sobota (34.49 percent) had the highest level of unemployment, while the Bratislava I borough had the lowest, with 4.72 percent, according to ÚPSVaR.

Of these people, 214,211 fall into the category of long-term unemployed, i.e. those who have been unable to find a job for more than 12 months. Compared to January their numbers dropped by 1,634 people, or 0.76 percent.

The project, funded via European Union structural funds within the Operational Programme Employment and Social Inclusion, will be aimed at people who have been without work for 12 months or more, jobless people aged over 50, the young unemployed and people made redundant due to restructuring. According to the Labour Ministry press release, employment agencies and non-governmental organisations will participate in the project, helping disadvantaged candidates find new jobs. The ministry will launch a public procurement process aimed at selecting an agency to run the project, the press release reads.

The Labour Ministry plans to motivate agencies with special bonuses for finding jobs for the disadvantaged. They would receive €200 for submitting a labour contract mediated for such a candidate, and another €1,500 if the employee stays in the post for four months. If the employee still holds the job after a year, the agency will receive an extra bonus, the amount of which will depend on the category from which the applicant comes. While the lowest sum will be paid for graduates and people made redundant due to restructuring, the highest sum will be paid for employees registered with the labour office for more than 12 months, the press release states.

Július Brocka from the opposition Christian Democratic Movement (KDH) considers the price that the EU will pay for one new job to be very high. According to him, it would be more effective to “create favourable conditions to establish purposeful jobs, mostly in the private sphere, and not to create an army of quasi-state employees”, the SITA newswire wrote.

Luboš Sirota from the McRoy Group recruitment agency told the Sme daily that if the disadvantaged applicants are successfully retrained it is possible that they could keep their jobs even after the state subsidies are paid out. He added, however, that this scheme, which is similar to one implemented in Great Britain, may not be successful in Slovakia, since Great Britain has a lower number of long-term unemployed. Moreover, Slovaks are worse off in education as well as work experience, Sirota told Sme.

Ivana Molnárová from the Profesia company said that even though she welcomes such initiatives, the ministry has passed changes to the Labour Code which have complicated the creation of new jobs. She was also sceptical about the “assurances” of the ministry, explaining that if an unemployed person receives a work agreement for an indefinite period of time, it does not mean he or she will not be fired later, Sme wrote.

Projects for the young unemployed not very successful

In August 2012, the Labour Ministry presented a plan intended to curb unemployment by creating a total of 14,460 new jobs via EU-funded projects designed to boost employment of youths and people over 50 years of age. Based on an agreement between Slovakia and the European Commission, the government was to spend €70 million on two big projects: one created for the private sector, focusing mainly on creating jobs in the transport sector and at small and medium-sized enterprises, and the other for community-based jobs in municipalities.

According to the scheme published in November 2012, employers could receive a contribution between €434 and €522 per month, depending on the sphere of their business. The contributions would be provided from November 2012 until September 2015.

The representatives of the Labour Ministry and ÚPSVaR informed that they would reassess the projects after the first six months. Based on the results of this monitoring, and how much money was allocated for the projects, it would then allow not only young people but also other disadvantaged unemployed people to apply for the same jobs.

Three months after launching the projects it seemed that young unemployed are not particularly interested in working in the transport sector, since only 12 people applied for the jobs that were offered, the Hospodárske Noviny daily wrote at the end of February.

Some of the employers approached by Hospodárske Noviny said that there are several very specific factors which affect employment in this sector, including the lack of qualifications. Moreover, Peter Paška from Proact People recruitment agency points to the fact that the reason might be low salaries offered in the transport sector.

Yet, companies from other sectors are interested in the projects. According to Hospodárske Noviny, since the projects were introduced, participating companies have hired more than 1,600 people. The Labour Ministry therefore decided to move to these sectors €8 million that was originally allocated for transport. The remaining €2 million will stay in transport as a reserve, the daily wrote.

Analysts see little reason for optimism, predicting that the number of businesspeople willing to join the projects will decrease. The main reason will be the crisis, said analyst with Next Finance, Jiří Cihlář.

Radovan Ďurana from economic think tank INESS said that the state is not an effective creator of jobs and that it does not have relevant information about the labour market, Hospodárske Noviny wrote.