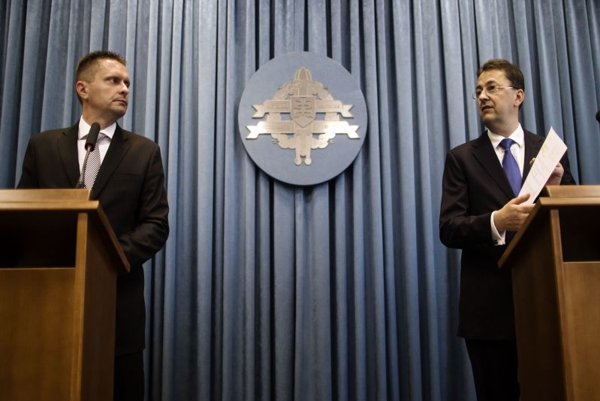 Glváč said that he might declassify documents which pertain to embezzlement suspicions after consultation with the head of the National Security Authority (NBÚ), Jozef Magala, a nominee of the ruling Smer party, as well as with the special prosecutor. Yet Glváč referred dismissively to the reports, saying that he sees no motive behind the case other than infighting between the former and current management of the military intelligence.

“The military intelligence is not a toy in the hands of a small group of people who do not hesitate to use anything for their personal and political interest,” Glváč said, as quoted by the SITA newswire, at a special press conference summoned to discuss recent developments.

The Sme daily originally broke the story, citing an anonymous 134-page file leaked from the military intelligence agencies, on May 16.

It caused allegations to fly between former defence minister Ľubomír Galko, who was sacked in 2011 over a scandal involving military intelligence agency wiretapping of journalists, and the current incumbent Glváč, who appointed one of the main suspects in the alleged embezzlement scandal to lead the now-merged military intelligence services.

The report contains information about alleged fraud pertaining to 15 expensive residential properties in Bratislava, as well as cars, which supposedly ended up in the personal ownership of VSS officers and their relatives. Both of the then directors of the two military intelligence agencies – Juraj Šebo of the VSS and Ľubomír Skuhra of the Military Defence Intelligence (VOS) counter-intelligence agency – allegedly knew about the transactions. The VSS and the VOS have since been merged and the new organisation, Military Intelligence (VS), is led by Skuhra, Sme reported.

On May 25 Glváč went so far as to assert that it is “provable” that no embezzlement ever took place. The minister of defence based his statement on an inquiry into the leaked report (which Sme had subsequently passed on to the special prosecutor’s office and the parliamentary oversight committee). In addition, the Defence Ministry said it was ready to file criminal complaints against those who it said leaked classified information. In this connection it named Galko, Mikulec, and his former deputy, Vladimír Suchodolinský, SITA reported.

Suchodolinský, who declared that he was the author of the report into suspicions of embezzlement, offered to reconstruct the original file, which was shredded when the term of the government of Iveta Radičová ended in 2011. The file was created when the VSS was led by Mikulec, and was shredded on his orders. Mikulec now says that he took the move in order to prevent “handling the material in question in a way which would have thwarted the use of all evidence in the investigation of the whole case by competent bodies”, Sme wrote.

According to Mikulec, since the suspicions were first publicised by Sme nothing has happened at the VS apart from “evidence being destroyed”. He also alleged that new documents are now being produced. However, Glváč on May 28 compared such claims to stories in a humour magazine, SITA reported.

Nevertheless, the parliamentary committee that oversees the operation of the VS will not look into the allegations of embezzlement any further, after Smer MPs, who have a majority on the oversight body, voted against such a move on May 30.

On May 28, three former military intelligence agents testified along with one active agent at a session of the parliamentary military intelligence oversight committee. One of them, Ivan Macko, who worked as Slovak military attaché in Turkey, Iran and Georgia and only recently left the service, said “our role was to find out what happened in the service between 2006 and 2010,” adding that he was charged by the director of the service to check the flow of finances pertaining to an investment in a building which he declined to name. According to Macko, the construction project displayed signs of criminal activity, adding that a prosecutor should deal with the case, SITA reported on May 28.

Yet Glváč claimed on May 24 that in eight of the 15 cases described by the report, the property in question was still in the hands of the state and used by the VS, while in three cases the property was no longer usable for the intelligence services and thus had been sold correctly and the full sum received, the TASR newswire reported.

Glváč on May 28 reiterated that the documents containing suspicions of embezzlement were not authentic – something which, he claimed, all three witnesses that spoke before the parliamentary committee confirmed.

“They said that the material had a different form,” Glváč said in his own version of the May 28 hearing, adding that “one witness said that the report also had different content” and that the notes he wrote into it were not there, SITA reported.

Glváč said that there were 43 authentic pieces of written evidence among the supplements to the report but, in his words, “these are taken out of context”. The minister said he intends to lift the oath of secrecy from everyone the prosecution requests. The minister described Macko’s testimony to the committee as “irrelevant”.

“One of the acts, in which military intelligence agents allegedly bought cars, is absolutely made up,” Glváč said, adding that another sale was carried out under Galko in 2010, despite being stated as having happened in 2008, and was approved by the minister of finance in the last government, SITA reported.

Suchodolinský, the purported author of the original report, said that in his testimony to the parliamentary committee on May 28 he had described the structure of the whole document that he had prepared, but that he was not shown the document that the committee possessed.

Suchodolinský referred to a law which stipulates that information on illegal or incorrect activities or illegal decisions by public officials cannot be classified.

Meanwhile, on the heels of the embezzlement suspicions, Šebo and Skuhra may have more explaining to do, following the publication of photographs of them posing with Georges Gansé, a former personal assistant to the long-time boss of the Slovak National Party (SNS) Ján Slota, apparently during a visit to Gansé’s home country of Benin, in West Africa. The photos, acquired through Gansé’s Facebook page and first published by Sme on May 24, feature both senior military intelligence officials drinking with Gansé. Šebo is currently the Slovak military attaché to China; it is not clear exactly when the photos, which are recent, were taken.

Gansé previously came to the attention of the Slovak public in connection with luxurious property that Slota has frequently been observed enjoying, but has insisted he does not own. Sme reported that Slota used a yacht and a plane which were owned by Slovben, a company for which Gansé was the authorised representative.

Glváč on May 29 stated that he had not yet asked Skuhra and Šebo about the photos, arguing that he had been trying to figure out whether any embezzlement of public funds happened within the military intelligence agencies.