Lipšic-Kollár: a marriage of convenience

NEITHER the romantic set-up of the ‘wedding’ at Devín castle, nor its romantic timing on the last weekend of May, were convincing enough to overcome the stereotype that when liberals marry conservatives, it is hardly a mariage d'amour. Nevertheless, even though the politicians admit that the reasons for their union are pragmatic, observers are not ruling out that they just might live happily together, at least for a little while. 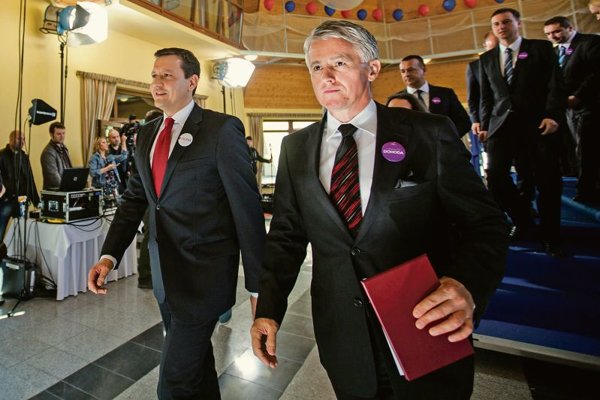 Will Lipšic and Kollár walk side by side fromnowon? (Source: SITA)
Font size:A-|A+0

NEITHER the romantic set-up of the ‘wedding’ at Devín castle, nor its romantic timing on the last weekend of May, were convincing enough to overcome the stereotype that when liberals marry conservatives, it is hardly a mariage d'amour. Nevertheless, even though the politicians admit that the reasons for their union are pragmatic, observers are not ruling out that they just might live happily together, at least for a little while.

A few weeks after leaving Freedom and Solidarity (SaS), the party that presented itself as the only haven for liberals in Slovak politics, five MPs grouped around Jozef Kollár, the unsuccessful SaS leadership candidate, joined forces with New Majority (NOVA), led by well-known conservative politician and former prominent Christian Democrat, Daniel Lipšic. The merger occurred just days after their respective groupings introduced plans for a loose form of cooperation.

The five former SaS MPs announced their intention to merge their recently created civic association, Liberal Agreement, with New Majority, on May 26. The new grouping, to be known as New Majority – Agreement, should thus now include “beside the conservative and civic-democratic factions … a liberal one”, NOVA announced in a press release. The party’s leader, Daniel Lipšic, considers this the first step toward uniting the centre-right forces on the Slovak political scene.

“We are open to everyone who shares our values and has a clean shield,” Lipšic said.
Now that the merger has been announced, it is up to the national council of the party to approve it, in Košice on June 15. The council will also change the party statute so that the liberal platform will be represented in the party leadership too.

With the new arrivals, NOVA now has seven seats in parliament. With eight MPs they would be able to establish their own parliamentary caucus. The Slovak media has speculated about other independent MPs joining, particularly Radoslav Procházka (formerly of the Christian Democratic Movement [KDH]) and Alojz Hlina (formerly of Ordinary People and Independent Personalities [OĽaNO]), neither of whom have ruled out such a possibility.

Liberal – but how liberal?

Political analyst Grigorij Mesežnikov called the merger of conservatives and liberals a marriage of convenience. Founding a new party probably seemed too difficult for Kollár’s group, so they chose to forge their political path another way – by joining NOVA, he explained.

Observers, however, note that there might not be much opposition between the two seemingly opposing political streams after all.

“It is questionable how deeply the liberal beliefs of these people were rooted,” Mesežnikov told The Slovak Spectator in reference to Kollár and his fellow SaS defectors.

“My personal opinion is that Mr Kollár focuses on economic liberalism, and it may well be that they will not stress the cultural-ethical liberalism so much in the future and thus there might not be any deep conflicts,” sociologist Martin Slosiarik of the Focus polling agency said.

Stumbling blocks set aside – for now

Politicians from both sides of the merger were quick to explain that the issues on which they hold differing, or even opposing, views – mainly concerning abortion and non-heterosexual partnerships – were not going to cause any problems within the party.

“It is legitimate if there are various opinions in the party regarding some issues, it’s like that in most parties,” Lipšic said in an interview for the Sme daily. “I won’t change my opinion, and nor will my colleagues from the liberal faction, but we will not traumatise the people with that.”

Both groups are now declaring they will focus “on those areas where we can reach an agreement”, ex-SaS Juraj Miškov told Sme.

These areas of agreement are mainly expected to be economics, restoring justice in the country and fighting corruption. The programme’s priorities include changing the political system “to ensure that citizens have more power in their hands, more work and higher salaries”, and reducing bureaucracy in the state, according to the NOVA press release.

Analysts agree that economic liberalism, law and order, and combating corruption are major issues that NOVA and Liberal Agreement politicians all emphasise, but they note that progressive issues will be a stumbling block, and thus something that neither of the two sides will want to resolve in public.

“They will rather stress the fact that they are the new right, and search for the common issues, and that might bring higher preferences for the party,” Slosiarik told The Slovak Spectator, adding that it is not clear how stable the party will be, since the progressive issues will have to emerge at some point.

Mesežnikov agreed, saying that although progressive issues are not a hot topic at the moment, they will be difficult to avoid even in the near future, since debates about decriminalisation of so-called soft drugs or registered partnerships for non-heterosexual people have recently occurred in parliament too.

Meanwhile, polling agencies have detected a rise in voter support for NOVA via two polls conducted in mid-May. The party polled 5.1 percent in the Focus poll, the results of which were released on May 28, and as such, would make it into parliament along with Most-Híd, which garnered 6.1 percent, as well as the Slovak Democratic and Christian Union (SDKÚ) with 7.3 percent, OĽaNO with 7.8 percent, KDH with 10.8 percent and the ruling Smer party with 40.8 percent.

One week earlier the party actually soared to 9.5 percent in a poll conducted by the MVK polling agency, which saw the SDKÚ and SaS failing to pass the 5-percent threshold required to make it into parliament, earning 3.9 percent and 2.6 percent, respectively. The election would have been won by the governing Smer party with 41 percent, according to the MVK poll, with KDH (10.6 percent), OĽaNO (7.4 percent) and Most-Híd (6.8 percent) making it into parliament as well.

Both polls were conducted before Kollár’s group joined NOVA, so the voters’ response to this move remains an open question for now.

“Not only voters of Kollár’s group, but also potential NOVA voters might mind the fact that the party has taken under its wing some liberals,” Slosiarik told The Slovak Spectator.

The departure of several prominent members from SaS affected its performance in both polls, as it failed to make it into parliament according to the Focus poll as well, in which it received 3.9 percent of respondents’ votes. The party split after the departure of Kollár’s faction divided the party’s electorate, according to Slosiarik.

Voters’ preferences will likely be crucial when answering the question of whether NOVA, now including a liberal faction, will be able to attract other politicians from the now fragmented right wing of the political spectrum, Mesežnikov noted.

“If preferences rise, then it could be interesting to other politicians too,” Mesežnikov said, adding that in such a case some individuals might be attracted to NOVA, particularly Radoslav Procházka, who so far has admitted he would be willing to cooperate with NOVA on designing a shadow state budget and some other measures.

If voter support for NOVA continues to grow, the SDKÚ and KDH will have to react to it, Mesežnikov noted.

The short history of Slovak politics offers some examples of peculiar unions similar to the liberal-conservative one of Lipšic and Kollár. The Slovak Democratic Coalition (SDK), which was created as an ad-hoc party with only 150 members (as candidates on its slate for the 1998 elections) by several centre-right parties to beat Vladimír Mečiar’s Movement for a Democratic Slovakia (HZDS) in the general election, comes close as an example, but observers note several big differences.

Firstly, the SDK, which later transformed into today’s SDKÚ, did not include the strains of cultural liberalism that people in Kollár’s group claim to stand for, according to Slosiarik.

Secondly, according to Mesežnikov, NOVA leader Lipšic is much more conservative than Mikuláš Dzurinda, the leader of the SDK and later the SDKÚ, was during his time in power in the late 1990s.

“But the main difference is that in the case of NOVA, it is fragments of parties that are uniting now, while in the case of the SDK, it was strong fractions,” Mesežnikov told The Slovak Spectator.